Viking luck has run out 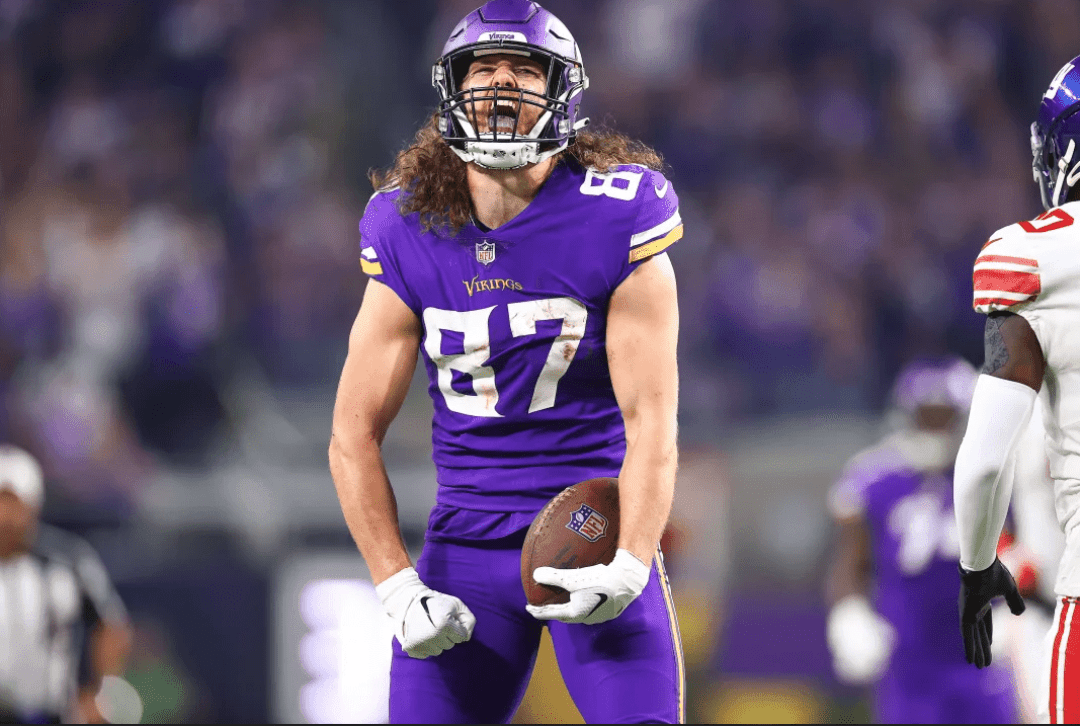 The Vikings' T.J. Hokenson had 10 receptions vs the NY Giants. (Photo: vikings.com)

STONY POINT – By the time you read this the Minnesota Vikings playoff loss to the New York Giants this afternoon (31-24) will have been regurgitated countless times. The coulda-woulda-shoulda will have already been mentally replayed and reviewed by the Vike faithful ad nauseum.

The football “experts” who said the Purple was a mirage all along are reveling in their alleged intellect and smarminess, and the good long-suffering sports fans in the North Star State will suffer some more.
Have we become too used to these types of endings? I hope not.

Because emerging from the fog of defeat is some hope here. For the Vikes, the Spielman-Zimmer era is now long behind everyone. The team has an excellent young football coach in Kevin O’Connell, who brought excitement back to the team, the organization and the fans.

There is some actual hope and optimism once again. This team was not really expected to do much this season. Let me restate that, this team’s expectations were fairly low coming into the season.

The 2022 Vikings overachieved. And they provided some very entertaining football along the way. There were the comeback wins, the 11 one-score victories, the epic comeback versus Indianapolis, the crazy, unbelievable win out in Buffalo, the last-second regular season win against these same NY Giants and more.

If you are a numbers and stats geek it isn’t hard to analyze that data and see that the team’s naysayers were mostly correct to knock the Vikings down in their weekly opinions. But this team kept winning anyway. And they made Vikings fans everywhere smile again.

This afternoon the Giants had more total yards, more rushing yards, better third-down efficiency and time of possession. But in watching the game one would still have the feeling that the Vikes were one drive away from tying the game up and going on another epic victory drive afterward.

It wasn’t meant to be. The reality and the analytics finally caught up to the Purple and loudly proclaimed this to be the end of the road for this season.

I watched the team intently this year and I’m glad I did. Mike Zimmers Vikings had become boring. They were hard to watch. When all of the dysfunction going on behind the scenes began to emerge, it made it even more challenging to watch every week.

This edition was fresh. They made the time between games this year almost unbearable. Fans could not wait for the next game to kickoff after one had just ended. It was fun again and often had me recalling the days of my youth when the Vikings were just about everything to me.

Where does the club go from here? They will assess the season just ended and they should take a moment to pat themselves on the back for the 13-5 record just achieved.

And then they’ll go about the work of adding to this season’s successes. It’s clear this team still needs a few pieces here and there. But they will have a lot of positive check marks on their list too.

The Vikings end the season with much to look forward to and I’d like to think that after a few days to get over the loss that the overall enthusiasm the team created this year will be even bigger next autumn. Skol, Vikings!

THE MINNESOTA WILD completed this calendar week with a 2-0-0-1 record, losing 4-3 at Madison Square Garden to the NY Rangers in a 4-3 SO and then posting wins against the NY Islanders on Long Island (3-1) before beating the Arizona Coyotes back in St. Paul last night 2-1. The club has played well at MSG at times and actually had a 2-0 lead after the first period but was unable to finish the deal.

The Isles' game was a bit strange. They took a 1-0 lead late in the first frame and then the second period was scoreless before the WILD put up three on the board in the third for the win.

The WILD had outshot the Isles by a 24-14 margin in the first two periods but were not finishing. The trend would continue in the third, with the team outshooting the Isles 12-6, but they wouldn’t tie the game until the 10:55 mark on a goal by Frederick Gaudreau.

Sam Steel would notch the go-ahead tally and eventual GWG at 12:28. Kirill Kaprizov would finish it up with an ENG at 18:48.

Against the Coyotes, the game was scoreless after one. Mats Zuccarello would open the scoring at 9:39 of the third followed by a Gaudreau goal 51 seconds later. The Yotes would score early in the third and forced the Wild to hang on for the win and two points.

Was the team tired out from the weeks traveling? They sure looked like it. On the other hand, every time I’ve seen the Yotes this year I was impressed by their overall play and energy. Their won-loss record is poor but you best not overlook them. They aren’t an auto-win for anyone. But there is little doubt they are in contention for the first selection of this year’s NHL Entry Draft Lottery.

What to make of the WILD now that the second half of the season has begun?

There is still some inconsistency to their game and I do not feel we have seen the team’s “peak” game yet. Obviously, injuries have played a part in that, but I’ve seen this team play some pretty good puck only to watch them flounder during some games as well.

And with the emergence of the play of goaltender Filip Gustavsson, who is the real number one on this club? Is it Marc Andre’ Fleury or Gus?

There are some bitter debates about that topic currently in The State of Hockey.

My bottom line is that Gus has turned out to be better than advertised and I feel the team is in good hands at that position.

I don’t see either one of them being able to win games on their own play, and that’s where the team play and structure become so vital. Early in the season when the team struggled, it was poor and has improved during the course of the season.

The Tale of the Tape looks like this: after 42 GP the team is 24-14-4 for 52 points and is in 3rd place in the Central division. They are 6th of 8 teams currently in playoff spots in the Western Conference but are only one point ahead of the two Wild Card teams at this point, but with games in hand over both. (CAL & EDM)