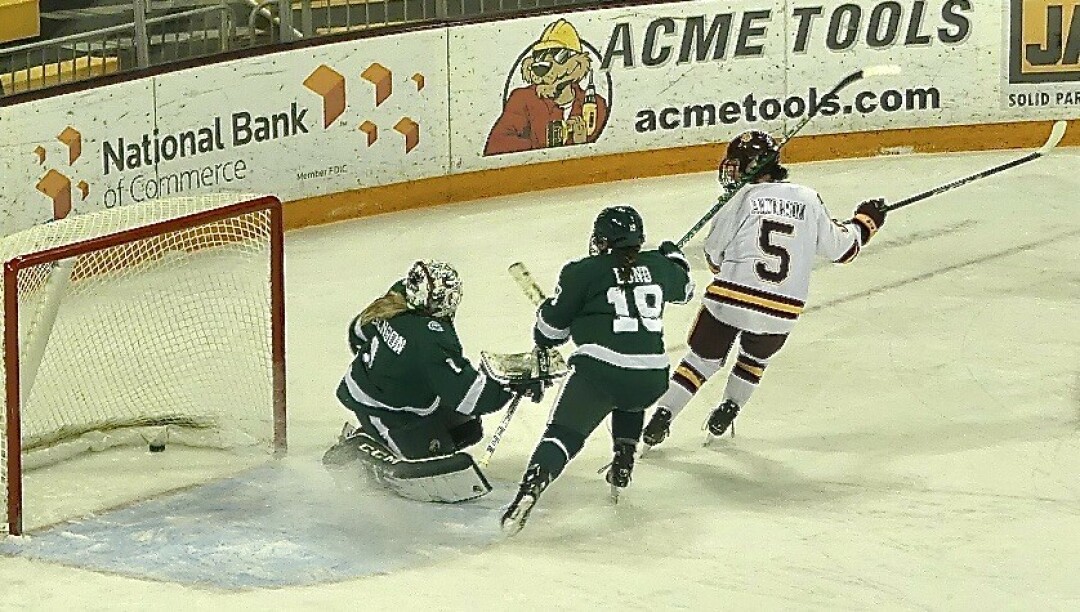 UMD’s Taylor Anderson sped out of the penalty box to score on a breakaway, one of her two goals in the 8-1 first game victory over Bemidji State. Photo by John Gilbert.

A couple of weeks ago, while watching Aaron Rodgers and the Green Bay Packers dismember the Minnesota Vikings' plans, and one of the most impressive parts of Rodgers’ game was whenever there was a third or fourth down and 6, 8 or 10 yards to go, he would send receivers out, invariably 2-3 yards farther than the required distance, and then he would drill a pass to them that, in most cases, resulted in a first down.

It was with such surgical precision that it dramatized one of the greatest shortcomings of Kirk Cousins and the Vikings, who repeatedly would send a receiver out in such circumstances 2-3 yards short of the necessary distance and repeatedly they would have to punt or turn the ball over. I’m not sure how many times that has happened, but I don’t think many of them have avoided my notice – and my outspoken criticism.

I have been a strong critic of Cousins because of his lack of mobility, but I also have been quick to point out the impressive job new coach Kevin O’Connell has done in specifying a new offensive structure that gives Cousins the chance to show off his strong arm and his rallying instincts without exploiting his weaknesses for moving out of the pocket and finding alternative receivers while doing so.

The only thing the coaches haven’t yet gotten done is to make sure the receivers take two more steps in crucial situations so a reception is a first down and not a crisis-making shortfall.

That weakness became clearer when Rodgers gave a tutorial in how to do it right. And it became much more obvious when Daniel Jones put on a dazzling display of passing for 301 yards and rushing for 78 yards and two touchdowns.

Cousins was good, but while his defenders blame it on the Vikings defense, we have to look at the crucial difference between Jones throwing a dozen times for just barely first downs on crucial plays, and Cousins on the last-gasp hope when it was fourth and eight and he sent his new favorite target, tight end T.J. Hockenson, on the right sideline. Hockenson went 3 yards downfield and stopped, catching the Cousins pass for his 10th reception of the game for a 3-yard gain, when a single Giants defensive back grabbed the huge receiver and flung him to the turf.

It was like playing in a sandlot game when your quarterback can’t scramble, and when everybody – the receiver, the quarterback, the offensive coordinator, and the head coach – apparently forgot that the needed 8 yards.

As for blaming the defense, it was obvious on my TV set that the Giants offensive coordinator went to school on the teams’ previous meeting and designed a scheme where Daniel Jones, making his playoff debut, would shred the Vikings' predictable defense, including running for 78 yards beyond his 301 passing yards, and a running back named Saquon Barkley, who sped through and around Vikings defenders whether on rushes or pass routes.

Cousins and the offensive braintrust forgot about Jefferson in the second half, and forgot about the team’s premier clutch receiver, Adam Thielen, the whole game. Jefferson had 47 yards on 7 receptions, Hockenson 129 yards on 10 receptions, while Thielen had 50 yards on 3 receptions, and was the target of Cousins only 4 times.

Where was Thielen on the concluding play? Downfield just enough for a first down, and just appearing to escape from his defender.

One last point in discussing mobile quarterbacks: Exactly 10 years before Sunday’s game, the Vikings had another NFC playoff game st home, against Drew Brees and the New Orleans Saints, in which a brilliant quarterback named Case Keenum threw a bomb up the right sideline to a mercurial wide receiver named Stefon Diggs for the game-winning and game-ending touchdown that is engraved in Vikings lore as the “Minneapolis Miracle.”

In last weekend’s other Wild Card playoff games, Miami, using a third-string quarterback, overcame a large deficit to force the Buffalo Bills to fight for a panic-filled 34-31 victory, and the Cincinnati Bengals held off the Baltimore Ravens 24-17 to also advance.

That left only Monday night’s potential classic, where Dan Prescott and the Dallas Cowboys played at Tampa Bay, where Tom Brady was holding court one last time.

It was only a classic for the Cowboys, who stunned Brady and the Buccaneers 31-14. Prescott was brilliant, throwing four touchdown passes and running for another as Dallas grabbed an 18-0 lead in the first half and extended it to 24-0 before the Bucs got on the board. Prescott was 25-33 for his four CDs, ran for another, and had no turnovers, for a quarterback rating of 143.3.

Brady, who might have played his last game for Tampa at age 45, actually accumulated more yards than Prescott, but most of them long after the result was beyond doubt. Brady was 35-66 for 351 yards, two second-half touchdowns, his first red-zone interception, and a meager QB rating of 72.2. So Brady, Aaron Rodgers and Cousins were all beaten by younger and more dynamic quarterbacks.

This weekend, Saturday’s games are Jacksonville at Kansas City at 3:30 pm on the AFC side and the Giants at Philadelphia in the NFC battle at 7:15 pm, and on Sunday,  the preliminary will be the Cincinnati at Buffalo AFC semifinal at noon, followed by Dallas at San Francisco in the other NFC semifinal,.

My pick, made before the playoffs began, remains the Cowboys, who looked the best of the field on both offense and defense in the first round.

Historians can scurry to the record books of the NCHC, as well as the old WCHA to see when the last time it was that both North Dakota and UMD met in a series with neither team anywhere near title contention.
Either one or both have been at or near the top for league and NCAA championships for a decade or two, and both are unsure of even getting home ic for the NCHC playoffs. This weeked, the Bulldogs – smarting from two losses at Omaha – travel to Grand Forks to face North Dakota, stung by losing twice to Western Michigan.

Omaha and Western Michigan are both solid teams in strong contention along with upstart Colorado College for third and fourth places in the NCHC, behind Denver and St.Cloud State. In fact, all Western, Omaha and CC are all 6-5-1 in league play, while the Bulldogs (4-8) and Fighting Hawks (3-7-2) are battling for sixth and seventh, ahead of only last-place Miami.

It was the UMD women who commanded the spotlight last weekend on the home front, with the hockey women breezing past Bemidji State 8-1 and 5-0 as Gabbie Hughes moved to within one point of reaching 200 for her five-year career at UMD, and goaltender Emma Soderberg moving up among the elite Bulldog goalies in both victories and shutouts. This may come this weekend at St.Thomas, but it’s almost too bad the Bulldogs can’t hold them back until the following weekend, when UMD comes home to face Minnesota. UMD’s 5-game league winning streak lifts them to 11-6-1, hot on the heels of the faltering Wisconsin Badgers, who are 12-5-1 after being swept by Ohio State.

Up at Romano Gym, meanwhile, Brooke Olson soared beyond the 2,000-point career mark by scoring 30 against Upper Iowa Friday night, then she added 14 more in limited duty against Winona State as the Bulldogs remained undefeated atop the NSIC at 12-0. Winona State was battling to a 13-13 deficit partway through the first quarter, then completely lost touch. UMD outscored the Warriors 8-0 the rest of the first quarter and 16-3 in the second quarter to take a 37-16 halftime lead. Winona hit one 3-pointer in the second quarter while going 0-13 on all the rest of their shots.

The value of experience showed up big in both high school boys and girls. Duluth East, with a big, strong and senior-dominated team, overpowered undefeated Hermantown 65-58 at the East gym. Jobe Juenneman opened the game by scoring all 8 East points for an 8-0 lead, and he had 11 as East went up 24-16. Rocco Paulson, one of two 6-foot-8 Greyhounds, muscled in the next 4 as East took command 12-1. Patrick Smith took the scoring baton from there and led the Greyhounds with 16 points, Juenneman had 13, Michael Kastelic 12, and Paulson, Dillon Bennett and Tyler Nyberg each chipped in 8. zNyberg is a freshman, the other five are seniors. Blake Schmitz, one of only four seniors on the Hawks whole roster, led both teams with 17.

In a girls game at Marshall, Grand Rapids also used the experience of several seniors to gain a solid 53-41 lead over the Hilltoppers, then turned loose junior Jessika Lofstrom. With 10 minutes remaining, Lofstrom hit a corner 3, then an inside follow-up, then a rebound bucket and  layup, eventuially scoring 14 straight Thunderhawks points in a 72-57 triumph.

Rapids is undefeated (12-2) after losing its first two. “They were hitting all their shots in the first half,” said Lofstrom, who finished with 28 points, while senior Taryn Hamlin scored 24.

The biggest game in high school hockey this season took place at Warroad Saturday, where the undefeated and No. 1 rated Warroad Warriors toppled previously undefeated Hermantown in a battle between two undefeated teams, ranked 1 and 2 in Class A, and a rematch of last year’s state final.

The game will be invaluable to the Hawks, who will start another winning streak with new incentive to meet Warroad again, at Xcel Energy Center.