Have you been jailed for justice? 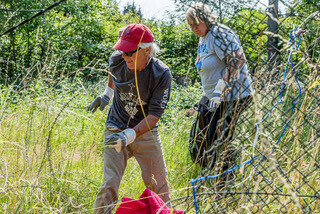 “You law abiding citizens, come listen to this song
Laws were made by people, and people can be wrong
Once unions were against the law, but slavery was fine
Women were denied the vote and children worked the mine
The more you study history the less you can deny it
A rotten law stays on the books til folks like us defy it”
Anne Feeney, union activist, in her song, “Have You Been Jailed For Justice.”

Civil disobedience – folks like us defying the law and unjust government actions – is older than our country. Peaceful resistance to rotten laws and bad government policies has been a frequent, necessary duty of citizens since colonial times. These struggles continue today.
The civil rights movement, which we celebrate on Martin Luther King Day this Monday, is the premier success story for civil disobedience. Because many citizens were willing to defy the Jim Crow laws (and were beaten, lynched, murdered and jailed) great progress was made in racial equality. Despite this, Black Lives Matter protesters are still being jailed for justice.

Another story this week is John La Forge, the co-director of NukeWatch, going to prison in Germany for opposing nuclear weapons. John and 13 other Europeans have been convicted of trespass while protesting U.S. nuclear weapons being illegally deployed at Germany’s Büchel Air Force Base. John has spent his adult life working to educate the public about the dangers of nuclear weapons and the nuclear power industry. He has been jailed numerous times for opposing war and nuclear weapons.

I listened to a webinar send-off celebration for John. I learned some interesting things about the consequences of protesting in Germany vs. the United States. You can watch the webinar video at youtu.be/jcQDrwwD3R0.
On the webinar two German activists described their experiences in German jails and an American women discussed her more than six years in our prison system for anti-war protests. The more humane treatment of prisoners by German authorities was significant.
There is also a huge difference in the length of prison sentences and the size of fines. John twice participated in cutting a fence and entering the air force base in Germany. He was sentenced to 50 days in prison for refusing to pay a 600 Euro fine ($648).
Similar actions in the U.S. have resulted in sentences of many years and tens of thousands of dollars in fines and restitution. Peaceful protesters often are charged with felonies like sabotage or criminal conspiracy.
It is ludicrous to think that peaceful protesters – often elderly women – can threaten, or in any way “sabotage” our national defense by spray painting a slogan on a wall or splashing their own blood on a missile silo. These minor acts of civil disobedience are purely symbolic political speech intended to educate the public about the danger of our government’s bad behavior. But the crime of embarrassing the government can have severe consequences.

As we all know there is little justice in our system of justice. This week the accountant who facilitated Trump’s fraudulent tax returns was sentenced to only five months in prison. He knowingly participated in tax evasion involving millions of dollars during many years. Slaps on the wrist are common for crime involving the rich and powerful.

The main take-away from the webinar was John’s discussion of his motivations and our government’s criminal behavior. The U.S. is a signatory to a number of treaties on nuclear weapons and the rules of war. Under our constitution these are federal laws and binding on the government. These include the United Nations Charter, The Geneva Conventions, The Hague Conventions, and the Nuremberg Charter, Principles, and Judgment (from the Nazi war crimes trials) and the Nuclear Non-Proliferation Treaty.

The Nuclear Non-Proliferation Treaty obligates the U.S. to work to reduce the number of nuclear weapons and eventually eliminate them. In the 1980s and 90’s we made considerable progress negotiating reductions with Russia. But all this goal has been abandoned. Today we are fueling a new arms race with massive spending to completely rebuild our nuclear arsenal. The NPT also forbids transferring nuclear weapons to other non-nuclear countries.

Our deployment of nuclear bombs in Germany is a violation of this agreement and is the basis for the protests at German air bases.
John believes (as do many people) that simply possessing nuclear weapons violates these treaties and shows intent to commit war crimes. Nukes are weapons of mass destruction and their use can not be confined to military targets. Deliberately targeting civilian non-combatants is a war crime. So building, deploying and preparing or threatening to use (the policy of Mutually Assured Destruction) is breaking these agreements and a crime against humanity.

In the webinar John explained, “Any non-violent actions against these preparations for mass destruction of civilians is justified, lawful and honorable...The threatened use of nuclear weapons, what is called credible deterrence, is a joint plan to commit indiscriminate, unaccountable mass destruction using firestorms and radiation...No criminal conspiracy of any kind, anywhere, compares to the deliberate public law breaking inherent in nuclear weapons threats.”

All the treaties listed above were written to allow getting out of inconvenient provisions. Ambiguity, loopholes and self-serving interpretations have been used to subvert the spirit of these laws. This is why the Treaty on the Prohibition of Nuclear Weapons is needed. TPNW makes all nuclear weapons and all activities to produce, deploy, use or threaten to use them clearly illegal. Adopting and implementing this treaty is essential to the safety of everyone in the world.

When Dr. Martin Luther King was alive he spoke out against war, excessive military spending and abolishing nuclear weapons. He understood the connections between poverty, racism, inequality and militarism. If he were alive today, he would be advocating for the TPNW. Today our country continues to be the “greatest purveyor of violence in the world” and today our government is the greatest obstacle to nuclear disarmament.

Civil disobedience can take many forms. Not all of us are willing (or able) to go to jail. But we all can act to oppose “rotten” laws and bad government behavior. To begin with we can stop believing the lies we are told about “national security” and nuclear weapons. Then we can pressure our elected officials to support the Treaty on the Prohibition of Nuclear Weapons.