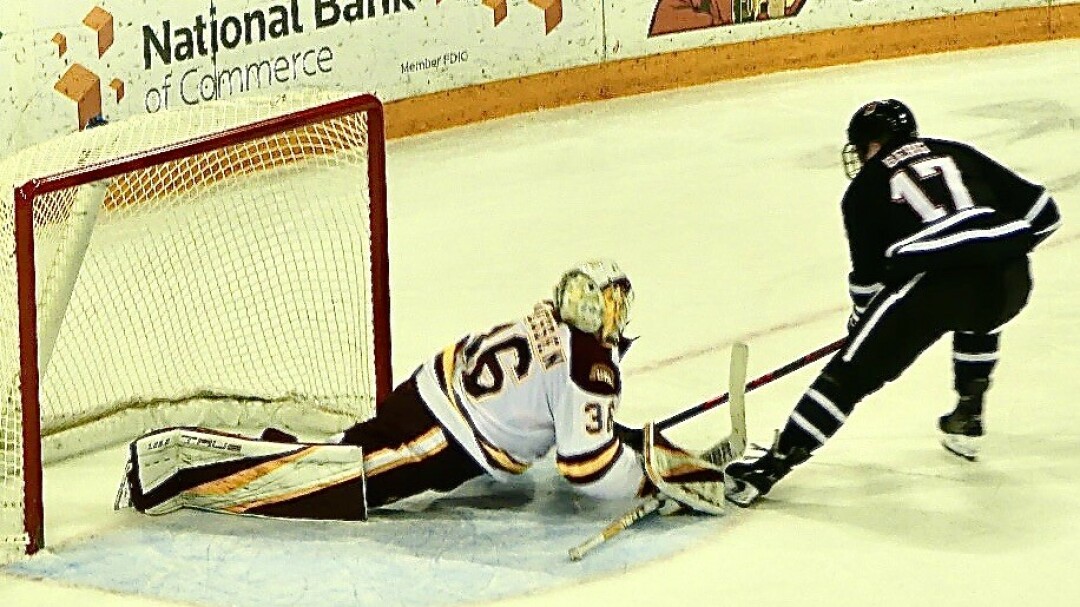 UMD goaltender Matthew Thiessen came up with a key save on a breakaway by UNO's Cameron Berg n Wyattlate in the second period of Game 1. Photo by John Gilbert.

Having already watched in person the UMD men’s hockey team splitting two tough, intense games with Nebraska Omaha, as well as an improbable comeback by the UMD men’s basketball team to overtake Nebraska-Kearney in the American Family Insurance Classic, I had seen enough ferocious finishes to last me for a couple weeks.

So I was not prepared for what turned out to be one of the most exciting Vikings games in their history, when they survived a topsy-turvy ending – or two – to beat the Buffalo Bills 33-30 in overtime.
If you watched it, you’ll never forget it. If you didn’t watch it, I feel bad for you.
But let’s leave that bizarre game to later and examine the UMD basketball and hockey teams.
At Romano Gym, the Bulldogs were host to the American Family Insurance Classic, a loosely arranged tournament that brings together four teams for a couple of high-test games. UMD, having beaten Southern Arkansas 93-74, took on Nebraska-Kearney Saturday afternoon.
The Bulldogs were not sharp in the first half, falling behind 17-2 because they got into a 3-point shooting match and even though they had the edge in field goal percentage at halftime – 15-32 to 13-34 – they shot a miserable 3-for-16 from outside, while Kearney had a guard named Sean Evans. He hit 4-5 from beyond the arc and had 17 at the half.

In the second half the Bulldogs had  novel strategy and somebody, anybody, covered Evans and slowed him down enough for the Bulldogs to catch up.
As usual, Drew Blair led the offense, which outscored Kearney 40-36 in the second half and wrested the lead away when Jack Middleton came off the bench and hit four 3s – one of which vaulted UMD into a 55-53 lead, and another that led an 11-3 run before another 3 by Middleton broke a 60-60 deadlock and put the Dogs ahead to stay.

“In the first half, we were hitting every part of the rim,” said Middleton, whose 18 points off the bench were vital. “We figured a few things out in the second half.”
When asked if this was the most he’s scored at UMD, he said, “Yes – this year.”
Meanwhile, across town at AMSOIL Arena, the UMD hockey team was aiming at proving some consistency, and indeed, a couple of hustling wingers who have been consistent in their effort but without much luck at finding the net, came through both nights.
Matthew Thiessen, who transferred in for his fifth year of eligibility, got the start both nights and played well, proving why coach Scott Sandelin was quick to welcome him as a veteran stabilizer to pair with Zach Stejskal. He came up with a huge save on a breakaway by Cameron Berg in second period, with UMD clinging to a precarious 2-1 lead.

That lead was the product of Jesse Jacques, a Hermantown center whose work ethic outdistanced his scoring, but he scored his first goal of the season for a 1-1 tie in Game 1, then he fired a shot from the top of the right circle that was knocked in by Tanner Laderoute for his first goal of the year as well.

The game ended with a couple of controversial penalty calls that did not go UMD’s way.
The Mavericks had fought back to tie, and then take a 3-2 lead in the third period when UMD defenseman Wyatt Kaiser broke in from the right. He put a move on defenseman Victor Mancini, who chased him toward the net and gave him a small shove in the back when he was about 5 feet from the crease.
At top speed, trying to get off a shot, a skater is on the ragged edge of stability, and the nudge sent him into the crease, where he clipped goaltender Jake Kucharski. Kaiser went flying and Kucharski sprawled in the crease.
Incredibly, play continued, and the Bulldogs skaters all cleared the offensive zone to tag up.
Quinn Olson, the other worker-bee who hadn’t scored a goal, gained possession as the Bulldogs charged again, and, from 60 feet away near the right boards, Olson flung a shot that went in over the still-sprawled Kucharski and into the net.
One of the apparently-confused officials blew his whistle, feebly, as Olson shot, and as he continued behind the net, Olson was jumped by Mancini and a brawl ensued.
If the refs hadn’t blown the whistle, we don’t know how they would have called the “goal.”
An intriguing sidelight was that Kucharski, who was still in a prone position head-first into the goal, raised his head to watch the action, and when it got hot, he subtlety dropped his head down to resume his full-possum position.
The officials claimed that nobody bumped Kaiser, so after reviewing it all, they gave Kaiser a 5-minute major for “charging the goalie.”
Earlier in the third period, the Bulldogs were less fortunate when freshman Kyle Bettens raced in on the forecheck, having lined up Mancini along the end boards. But just as he was about to make the hit, Mancini’s skates went out from under him and he fell into the boards. Bettens didn’t have time to completely miss him, but he did what he could, slamming into the glass but avoiding a heavy hit on his fallen target.

Nonetheless, the officials gave him a penalty, for what? A near-miss?
Whatever, Matt Williams scored his game-winner on that power play.
The next night, in a bit of poetic justice, freshman Ben Steeves scored twice for a 2-1 lead, and with the UNO goalie pulled, Matt Williams tied the game 2-2 with 1:30 remaining.
The game boiled into overtime, and 1:50 into the 5-mnute 3-on-3 session, Quinn Olson carried into the Mavericks zone, noticed the defense retreating, so he cut wide left and fired a shot from the circle. It went in for a 3-2 Bulldogs victory.
“Top left, over his shoulder,” said Olson.
The assist on the goal was from goaltender Thiessen.
All of that is why I was ready for a nice, quiet, routing Vikings game at Buffalo on Sunday.
Instead, the Vikings and much-criticized quarterback Kirk Cousins, made a remarkable rally in the fourth quarter, throwing the ball with previously unseen touch and accuracy.
If you isolated the top 10 Cousins passes of the season, eight of them were in that game.
Spectacular catches by Justin Jefferson, Adam Thielen and others, plus an 81-yard touchdown run by Calvin Cook, and a forceful 8-yard touchdown run by Duluth’s own C. J. Ham put the Vikings into position to win the game.
Penalties and misplays and weird happenings left a fourth-and-1 at the Buffalo 1 as time was running out.
Incredibly, with Cook, and Ham, and Jefferson and Thielen at his disposal, Kirk Cousins tried to wedge his way into the end zone on a quarterback sneak!
The Bills stopped him, and Buffalo took over on its own 1. Josh Allen, hoping to get some room for maybe a last play, fumbled the snap right on the goal line, and linebacker Eric Hendricks fought through the maze of bodies to recover the ball for a touchdown.
Having overcome a 17-point deficit, that tied the game and it went to overtime.
The Vikings marched into position, but had to settle for a field goal and a 33-30 lead, but the Bills got the ball for a final chance because Minnesota could only muster a field goal.
Josh Allen was brilliant, engineering a drive that put the Bills in position for a tying field goal or a possible victory.
They went for the victory, but Patrick Peterson cut in front of the Bills receiver and intercepted the Allen pass on the goal line. He ran out about 10 yards, then sprawled to the  turf, knowing the Bills last hope had been extinguished.
It was an incredible game, and the Vikings are now 8-1. Think about it!
And Kirk Cousins came through under the most intense pressure he will face all season.