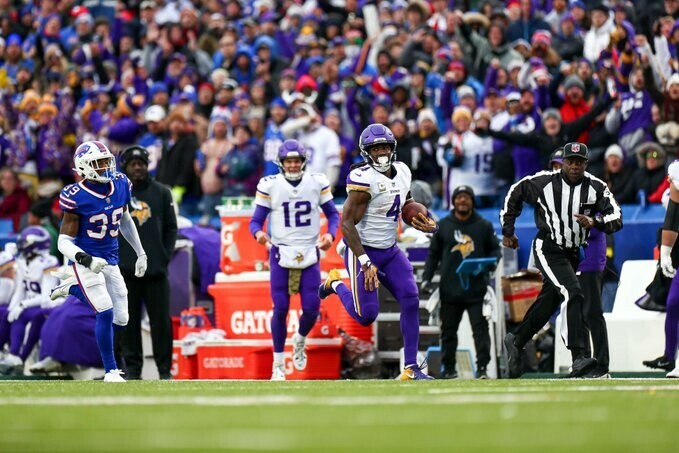 The Vikings' Dalvin Cook scores vs. the Bills on an 81 yard TD run.

CANAL PARK – I have been watching Minnesota Vikings football from the very beginning. I was kind of a quiet seven-year-old during their first season but having some neighbors on the team certainly gave my interest a boost. And spending a good deal of the season around them boosted my knowledge of what was going on in the game and why.

As I grew up my interest never waned, and I have been a witness to just about all things Purple. I don’t follow the game as hyper-closely as I once did, but I’m still Purple to the core.
My entire family is too, especially my mom and brother, and while my dad was still with us, he was a big fan as well. We’ve experienced the ups and downs, the thrills and chills, we have laughed, groaned, moaned, shed tears of elation and disappointment, and we have been able to take in the birth and history of the franchise from some pretty good seats with a unique view.

So, I have a neighbor that is your basic maniacal Vikings fan. Well, maybe not basic, but he is into it pretty deeply. We chat about upcoming games during the week, share opinions and views, make predictions, (I should know better), and exchange a lot of purple chatter.
This week before today’s game was no different. I shared with him that I had a good feeling about the team’s chances out in Buffalo for today’s tilt versus the Bills.
The Bills came into the contest widely thought of as the best team in the AFC, and few would debate it.
The Vikes? Many analysts still view them as a “show me” club, as in we still aren’t sure if they are for real or not. I get that. Even in the Sagarin Ranking, the Vikes were stuck at the tenth spot, and the determining factor in holding them down there, even despite having the second-best won-loss record in the NFL was their schedule.

They are ranked as having the 31st difficulty of schedule in the league, meaning Sagarin’s formula believed them to have the second easiest schedule in the league. They were also 0-1 versus teams in the top 10, and 1-1 against the top 16 teams. Buffalo was in the top position. (2nd ranked in difficulty of schedule) Philadelphia is the only undefeated team (8-0) and will play WAS in the Monday night tilt.

My neighbor Daniel and I talked about the game earlier in the week, but I hadn’t seen or spoken to him before the game began.
As you know, the Vikes looked good early, the Bills went ahead, but the Vikes kept plugging away. Late in the 4th quarter, they got within four points and just took off from there. They seemed oblivious to the fact that they could still go away losers in this suddenly classic game.
They went ahead with less than a minute to play. Buffalo tied the contest with five seconds left. The Vikes went back ahead with 3:45 left in the OT frame on a field goal.
With the Bills driving for the endzone, Josh Allen threw an interception just beyond the goal line to Patrick Peterson to win the game for the Vikes 33-30.
The list of plays that occurred between the Vike’s late fourth-quarter TD and the winning stop is nothing short of breathtaking. The series of plays that unfolded in that timeframe is beyond words.
In the meantime, I’m texting my friend that this is just the way the Vikings go. I have never known them to play any differently. He replies but is still ready to jump off of his garage or something like that, and I said just calm down, I think they will be OK. The later it got though, I did entertain the thought of OT. It may have been fitting that this game ended up there.

I’m glad to say that the OT didn’t disappoint either. It was as entertaining and drama-filled as the rest of the game was. The Vikes held on and won.
I can tell you I was smiling. The broadcast crew was calling it the Game of the Year late in the fourth, and it has to be at the top of the list so far. The win and the good feeling that goes with that are fun, as they should be.
I did go over to see my friend and he and two of his boys were still pretty fired up. The post-game talk was fun and I think we all knew that we just got to see some sports entertainment that makes it all worth watching. Today’s contest was all about everything right with the game itself.
The Wild finished up their calendar week at 2-2 after dropping a game to the SJ Sharks in St. Paul this evening in a 3-2 OT-SO loss. This tilt followed their 2-1 West Coast roadie.
After today’s games, the data for the team is; GF-26th/39. GA-9th/42. PP-7th/25%. PL-13th/80.4%. The team has the second most PIMs with 210. 24th-FOW/46.7%. The team is 21st in Hits per game with 21.07.
After losing to SEA in a 4-0 dud of a game, due to a scheduling quirk the team had the next four days off before going West.
In the road trip opener against the LAK, the team lost 1-0. The team scoring drought continued but netminder Marc Andre’ Fleury had his best game of the season.
The next night versus the rebuilding Anaheim Ducks the club won by a 4-1 score before taking on SEA. This may have been the strongest team performance of the season as of yet in a 1-0 win. Fleury had another strong performance and the team’s defensive game showed signs of coming together.
Today, and still missing three important players, (Greenway, Hartman, and Duhaime) the team took a 2-0 lead into the final seven minutes versus the Sharks but gave up the lead in a 1:53 span late for the tie. The OT proved nothing and the Sharks prevailed in the SO.
I’m torn between injuries, infancy of the season and a different roster from last season as to what kind of opinion to offer up on this edition of the WILD.
We have yet to see all of the anticipated players on the ice at the same time in a game. The team is a mere 15 games into the campaign and does not appear to have settled on a style or flow for its game. We have seen flashes but not with the whole team at the same time.
And one other thing; we miss that Kevin Fiala guy. A big part of his game was in puck retrieval and possession. That is huge, not only for him but for his team.
When you limit an opponent’s time of possession it has the benefit of making your defense look better than it might be.
Now he’s gone and it feels like our defense is somewhat exposed. No superstars or big studs. Perhaps this year’s sudden defensive surge is due to Fleury.
If so, how many games can he keep that up?
This week; @ NSH, versus PIT, versus CAR. PEACE