Not a lowly lichen 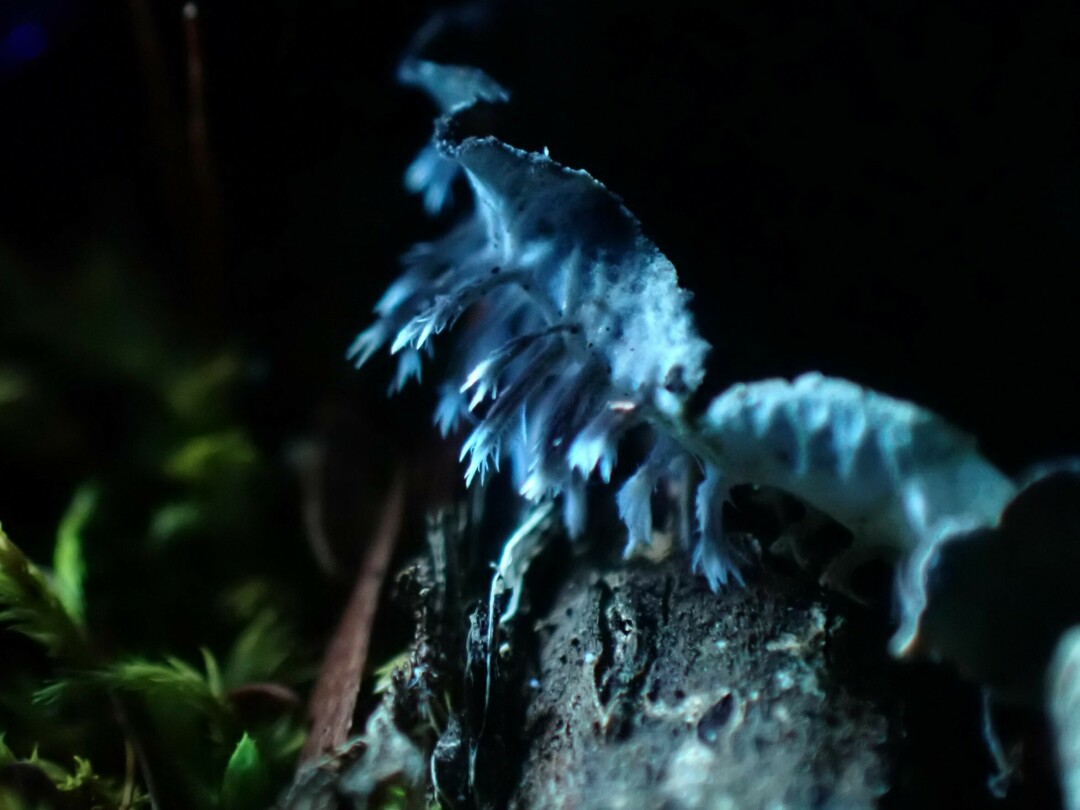 More than a dozen tiny arms reached into the darkness. Clawed tips shone white and their lengths glowed an eerie blue in the beam of my UV flashlight.
Spooky though they were, the tiny arms belong to one of the most common lichens I see growing on the ground here in the Northwoods. These lichens, in the genus Peltigera, are part of some pretty amazing events in the history of lichens.
Lichens on the whole are incredible. Each lichen is a symbiotic relationship between a species of fungus – who gives the lichen both their structure and their name – and another partner, like algae, who can photosynthesize.
Together, they can live on bare rock, dead tree branches, old rusted-out cars abandoned in the woods and much more. Nutrients come from the wind and rain. They create sugars from water and air.
One of the main jobs of the fungus in this partnership is to keep the lichen from blowing away (unless they are a tumbleweed lichen on the tundra).
Toward this end, many leaf-like (foliose) lichens grab on to a substrate with little root-like rhizines that emerge from their lower surface.
In some species of lichens, these rhizines exude acids that make minerals more accessible to the entire food web, including you.
In Peltigera lichens, these rhizines glow eerily in UV light and look like a little Halloween diorama of disembodied arms nestled in the mossy bank of my driveway.
The glowing isn’t unusual – many lichens fluoresce in UV light – but the fact that the rhizines attach the lichen’s leaf-like thallus to the ground and not to a twig or rock is different than most of the lichens I see. That’s one of the ways I recognize Peltigera.
Their color is another clue. While many lichens on twigs and rocks are pale green, bright orange or sunny yellow, Peltigera’s color scheme is straight out of the hiking pants section of the L.L. Bean catalogue: khaki, mineral gray, storm gray, deep olive and emerald spruce.
A lichen’s colors are a result of the interplay between the fungus, the photosynthesizer and additional partners like yeasts or bacteria who have joined the party.
Drab though they may be, these lichens, growing in ruffled mats on lumpy ground, are fertilizing the forest. That’s because their partnership includes cyanobacteria.
Commonly called a blue-green algae, these bacteria can not only form sugars through photosynthesis, they can also fix nitrogen from the air. That nitrogen becomes part of the lichen until rainwater carries some of it into the soil, and decomposition releases the rest of it once the lichen dies.
Peltigera lichens, growing on the ground, are essentially Nature’s slow-release fertilizer pods.
Nostoc is the most common cyanobacterium in Peltigera lichens, and it can also occur outside of lichens in the environment, where it looks like dark green jelly on the ground. Because Nostoc is pretty much invisible until a rain, people have imagined it to be snot that has fallen from the sky, and named it appropriately: star jelly, troll’s butter and spit of the moon.

Its scientific name is a combination of the nos from nostril, and the German word for nose hole.
Despite being a little gross, Nostoc isn’t the main culprit behind the toxic blue-green algae blooms that are becoming more common in lakes.
There’s a little joke about lichens that goes “Freddy Fungus and Alice Algae took a lichen to each other…” In this case, that first blind date between Freddy Fungus and Cynthia Cyanobacteria set in motion a whole host of things, including 1,200 new species of lichens and all of Peltigera’s relatives.

Recently, a Peltigera became one of the first three lichens ever selected for genome sequencing.
While Freddy and Alice’s (or Cynthia’s) relationship has been a very beneficial marriage, the fact that lichens are made up of at least two different species of completely different organisms means that reproduction can be a challenge.
The Peltigera lichens on my driveway have little brown appendages at the tips of their ruffled leaves. These inspire the common name “dog-tooth lichen.” They are the reproductive structure of the fungus only, and will release fungal spores who need to re-associate with a cyanobacterium to form a new lichen. Nostoc are quite common, but this does involve some risk!

Other types of lichens create wart-like lumps called soredia that contain both the fungus and the cyanobacteria or algae together, ready to take on the world. Handily, most lichens can also grow a new individual from a broken chunk of the original.
If you can find them, don’t let the drab, ground-hugging forms of Peltigera lichens fool you. They are essential forest fertilizers, role models for partnership, and even contain the spit of the moon.

Emily Stone is Naturalist/Education Director at the Cable Natural History Museum. Her award-winning second book, Natural Connections: Dreaming of an Elfin Skimmer, is now available to purchase at cablemuseum.org/books and at your local independent bookstore, too.

For more than 50 years, the Cable Natural History Museum has served to connect you to the Northwoods. The Museum is now open with our exciting Growing Up WILD exhibit. Follow us on Facebook, Instagram, YouTube, and cablemuseum.org to see what we are up to.