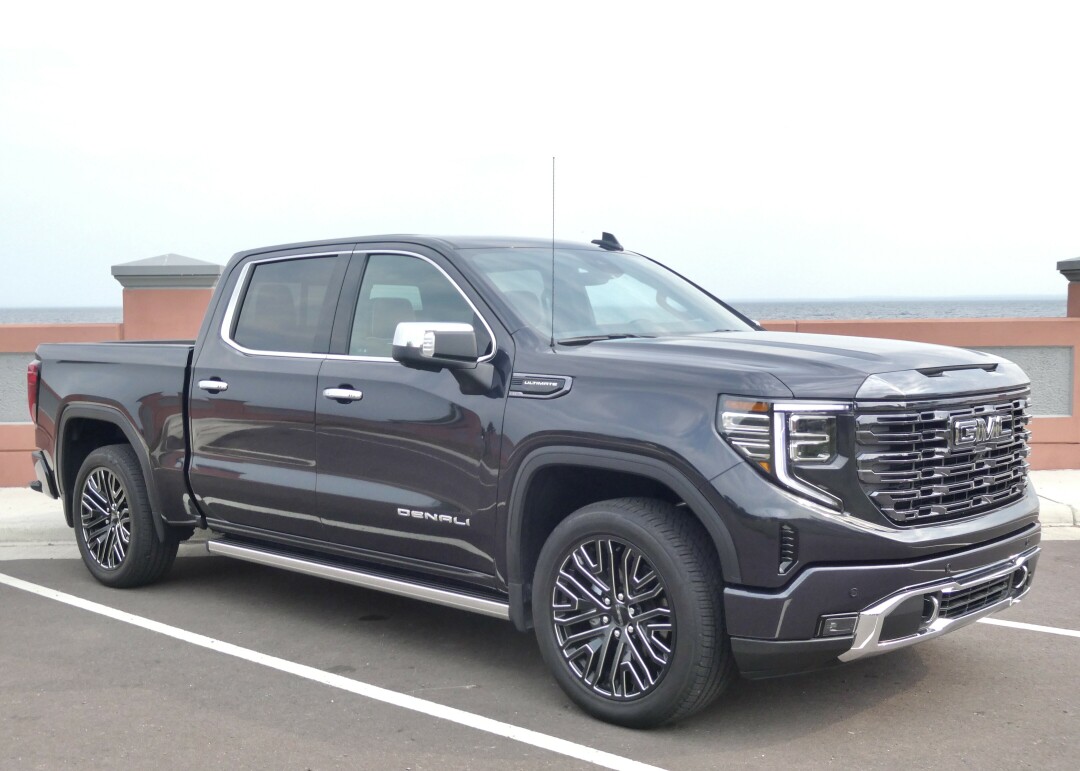 It was at some point during my recent test-drive time with the new GMC Sierra Denali pickup truck that I realized it and its Chevrolet cousin Silverado had become much more competitive in the red-hot full-size pickup market.

That is a breakthrough of sorts, even though their stalwart fans have remained pretty loyal.
For about two decades, ever since the “family car” became a truck, let’s say, I’ve suggested that if you really want a full-size pickup, you can make a subjective choice of whichever one you like the looks of best, and you won’t be making an objective mistake.

The Ford, Chevrolet and Ram had all gotten so good in their upward spiral that all of them were strong, capable and amazingly versatile as family haulers, I wrote that, but I had my fingers crossed.

Chevy/GMC lovers wouldn’t consider a Ford or Ram, but it was obvious that while Ford stayed at the top of the pack, and Ram had improved so much it displaced Chevy as the No. 2 seller behind Ford, Chevrolet and its upscale cousin GMC had fallen behind in engine technology and refinement.

But now, in the 2022 model year, my annual suggestion can be verified, because while Ford and Ram haven’t slipped a bit and in fact have become more capable and more luxurious, the 2022 Chevrolet Silverado and GMC have improved significantly – including under the hood.

I’ve driven several Silverados, and I believe you can come up with dozens of different combinations of truck and powerplant. What held the General Motors twins back for decades was the corporate decision to start with pushrod V8s while their competition was going toward dual overhead camshafts to produce more power and better fuel economy.

One of the Silverados I drove had the new 2.7-liter V6, with dual overhead cams and a turbocharger. Another had the 3.0-liter turbo diesel that was smooth, quiet and powerful.

That was good prep work for the big GMC that showed up a few weeks later.

The Sierra Denali pickup had pretty much everything you could want on a pickup truck, including a well-designed rear tailgate that can turn into a workable drop-down thing for ease in climbing up into the bed.
The vehicle is, in a word, enormous. There seems to be a competitive idea in full-size pickups that the more massive it looks, the more impressed truck buyers will be. The grille is huge, starting down low and rising so high it is very difficult to see over from the driver’s seat. It took me several days of pretty constant driving before I was able to pretty well calculate how close I was to objects, such as a car parked ahead.

It helps that the large information screen on the dashboard uses the new technology of giving you a view of your truck doing forward or backward, but in addition you can isolate one third of the screen to become a 360-degree top-down view of your truck. So when you maneuver two or three times to make sure you’re hitting the perpendicular parking lot stripes, you can see exactly how far you can creep forward before you risk bumping into the bumper ahead. Very helpful.

The bucket seats are firm and comfortable and adjustable including lumbar on the driver’s seat. But getting up and into those seats takes some effort.

A lot of companies put grab-handles at various spots inside the ceiling and door frames, but I have to say the GMC folks have made an effort to rise above, with running boards that slide out to meet you and quickly slide back in, and they seem to be just high enough for an easy grab of the grab-handle on the A-pillar.

The GMC Sierra Denali is so large that it seems the comparatively small 3.0-liter turbodiesel might not be big enough to handle it, but it is. The turbocharger gives it plenty of boost.
Most impressive were two features of the diesel. First, it ran silently – so silently that nobody riding with me or standing alongside could guess it was a diesel.

And second, it delivered from 20-25 miles per gallon in most of my driving in and around the steep hills of Duluth, and on one specific day when I covered 160 miles in city and highway driving, the computer registered 33.5 mpg. For a big – huge – pickup truck, getting more than 30 mpg is impressive indeed.

The Silverado and the Sierra both got redesigned for 2022, and while we might say “it’s about time,” it is almost ironic that the new engines lift both vehicles up to full credibility, the changes come just a couple of years before GM aims to convert most, if not all, of its vehicles to electric.
Already I can’t wait.