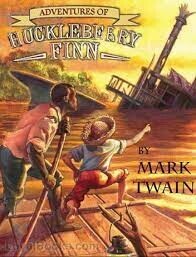 A decade ago I first heard objections to using Twain’s Adventures of Huckleberry Finn in high schools. Seemed odd some wanted to approach American Lit without one of its central works.

The objection (also encountered when I was doing a one-man Twain show) was language, the “N” word. I understood the objection and complied when told I must, but I tell you, softening or eliminating the offensive language (ex. Pap Finn’s speech) made race bias seem less offensive.

I found the objection (when followed) got in the way of understanding race and slavery in the time Twain wrote what was considered (I think rightly) a spearhead work addressing issues we still struggle with. I could be offensive suggesting an instructor who balks at Huck Finn (HF) lacks a grasp of the material and is ill prepared to teach Am. Lit. (I don’t mean social theories, a separate area of study).

Long as I’ve got you here, let me explain why I support Twain and Huck. Firstly, the Realist Movement in Am. Lit. opened the way for the explosion of modern-contemporary writing.

The realists, Twain being a master in the field, took literature away from the high flown and into the lives and talk of ordinary people. Schoolboard snobs and librarians of the day declared HF “trash unfit for the young.”

In that sense today’s objections echo past sentiments with uncanny irony. The practice of using ordinary plain speech in literature was a huge improvement over writing that catered to social elites of any persuasion.

Huck, a disaffected runaway boy, and Jim, an honorable runaway slave, relate to one another as people sharing a common language and understandings of the day.

Having an excellent ear and sense of timing, Twain did justice to the life of a slave and a boy thrown in together on a shared mission to find a better, freer life.

As I said when being bad, an instructor who cannot grasp the basics of HF might not be suited to teach Am. Lit. and might want to revisit their major or figure out what it is that might make writing have to bow to the standards of a social movement (very much the thing Twain fought in his writing by opposing conventional religion, etc.).

Having put some time into Twain I could go on, but I hope I’ve given a sense, at least, of why Twain and realism was and is important to Am. Lit and to, I’ll add, its social critics today who very much (for their reasons) echo the bombastic scripture thumpers of Twain’s time.

It was a radical notion to make a hero of an uneducated runaway kid. The idea offended many because Huck was a plain old boy of his day with plenty of warts and superstitions, along with what Twain described as “good a heart in any man or boy.”

In other words, Huck’s heart was his feature of merit. Trusting it helped him be human. That too was radical when convention and correct thinking were considered textbook ways to be human.

Huck felt differently and followed his own path. Isn’t that a good, commendable thing? Twain saw worth and value where elite society saw disgrace and objection. He saw an uneducated boy and runaway slave as worthy representatives of humankind and our shared condition thrust into a world well outside the control of any individual, boy, runaway slave, professor, preacher or social theorist.

An interesting objection to the story is based on HF being about a white boy. (It shouldn’t have taken the objector too long to figure that out.) Interesting that a critic would be so put off by skin color, even that of an impoverished undereducated pre-Civil War kid. But there it was, example of supremacy that I’d say wasn’t.

More importantly, I think, that criticism misses seeing the real center of the tale. It’s Jim. Without him and his humanity Huck would simply be a runaway.

It’s Jim who expresses a major human dilemma. Jim who grieves for the wife and children he’s had to leave. Jim is the story’s heart and soul. Huck is witness to things beyond him that gradually he begins to grasp.

In their time together the duo shares scrapes and good times. They come to care for and about one another, considered not acceptable at the time. It’s exactly social acceptability that bedevils Huck, as seen in a pivotal episode of the story.

As Huck, with mixed motives, pad-dles away, leaving Jim to hide on the raft, along come two men in a skiff. Slave catchers. They call to Huck about the raft and who’s on it. Huck is at a deciding moment. Tempted to do what society says is correct.

Instead, Huck tells the slave catchers Jim is white. That is all they need to hear and row away in search of prey. For friendship and because he now sees Jim differently, Huck acts with hard-won good sense, action that in the past earned censure that such shocking material be kept from harming young readers.

More than a century later the stiff-necked scriptural proponents of condemnation are replaced by equally stiff necks denouncing HF as immoral on fresh but surprisingly similar grounds.
Turn-of-the-last century bigots had little more idea of their narrowness than do those of today. Different causes but common tactics and aims to remove words and ideas they hold as harmful. Whether the cause is immortal salvation or social justice, banning and censoring are destructive practices we should not encourage.

Is there social-political content in HF worthy of study in Civics or Social Studies? Yes. But to remove HF from HS study of American Lit. is one whopping big error I say suggests instruction not up to the task.