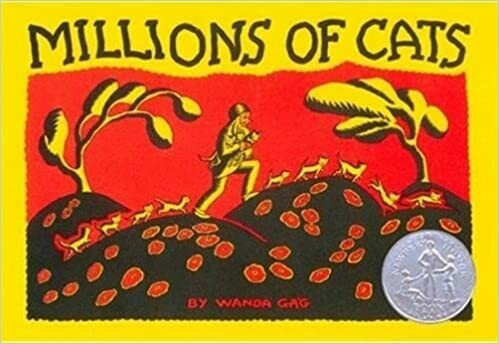 Long before the Reading Rainbow, baby boomers got a shot of TV book reading on Captain Kangaroo where the Captain, Bob Keeshan, read children’s book classics such as The Five Chinese Brothers, Stone Soup, To Think That I Saw It on Mulberry Street and Millions of Cats.

I found Millions of Cats in the gift shop of New Ulm’s historical museum on my tour of the brief and disastrous Dakota “Uprising.” Its author, Wanda Gág, was from the city. I knew the Cats illustrator was a Minnesota girl but if I’d learned this during my stint student teaching in New Ulm 50 years ago I’d long since forgotten.

Wanda’s father Anton was born in Bohemia about the time of the uprising. He crossed the ocean and moved to New Ulm at age 14. He was, according to Wikipedia, full of Bohemia’s cultural liberality before the Republican party discovered that liberal was a dirty word.

Although Anton’s primary occupation was that of a photographer he was also an ambitious historical painter. One of his paintings depicting the Dakota attack on New Ulm can be found in Minnesota’s State Capitol. It took place in his infancy but there were living witnesses to describe the event to him.

On his deathbed Anton told his teenaged daughter to follow him into art – to finish what he’d begun. Her career took her to the great cultural and economic center of the nation New York City. She would lead her artistic life as a Bohemian, taking lovers and only married late in her not-too lengthy life. 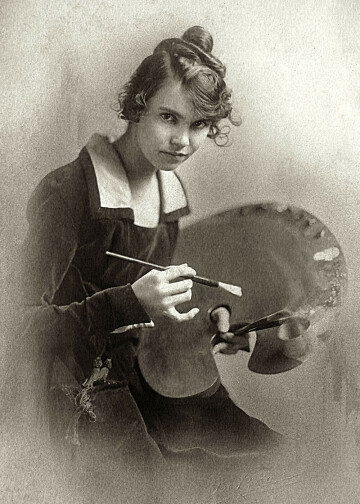 Her greatest success was Millions of Cats, which began as a story she invented to amuse the children of friends.

Wanda Gág fancied the grim Grimm brothers take on fairy tales. She looked dimly on the prettification of fables by the Disney studios. Her black lithographs remind me of the stretchy landscapes of American painters like Grant Wood. They perfectly fit with her fable of an old man setting out to find a cat companion for his lonely wife.

Taken at face value the story’s climax is a horrific depiction of a population explosion. Its refrain is: “Hundreds of cats, Thousands of cats, Millions and billions and trillions of cats.”

One small disheveled cat survives because, unlike the others, it did not proclaim its magnificence. It is simple coincidence that it could be a metaphor for Southern Minnesota’s loss of the Dakota.

The disappearance of trillions of cats and their significant biomass in their struggle to be an old woman’s companion is never explained.

By my college years Cats could have been a metaphor for Paul Erlich’s controversial book, The Population Bomb. Baby boom couples like my wife and I took its warning of uncontrolled population growth to heart.

Back in the ‘70s the Earth had half its current population. Many boomer couples like my wife and I decided to limit themselves to two children – the value of replacement. The book was anathema to land developers like those who expanded housing in now blackened and flooded areas of the west.

The Congress of the 1850s that opened Dakota lands for mass European settlement would have found such a book equally objectionable.

The tale took shape as a fanciful story to entertain Wanda’s friend’s children. She was not a eugenicist, like the much maligned Margaret Sanger, but like Sanger she was a modern woman who took lovers and penned an essay in the Roaring Twenties called: “These Modern Women a Hotbed of Feminists.”

Millions of Cats was published the year of my Mother’s birth – 1928. My mother would grow up imagining the life of an artist but not the life of a feminist. My Grandfather did not begrudge his daughter art but he was crushed when she cut short her college career to marry a sailor and start of family.

It would take my Father’s death in 1987 for my Mother to move to Minneapolis, rent a downtown studio warehouse and throw herself fully into art. I talked her into illustrating a children’s story once but I quit the project before completion. I treasure the paintings that now hang on our walls.

Wanda’s life in the Big Apple was just what generations of smart, ambitious country kids aimed for.

That’s a far cry from the attitude of many rural people today. The freedom Wanda exercised was not unlike the escape by several popular actresses from the slave like studio system.

Will there never be an end to men who know better?

Today, Anton Gág’s home in New Ulm is the Wanda Gág museum. She is but one of several famous Minnesota woman authors of children’s literature who have museums in Dakota country.

Mankato hosts a museum for Maud Hart Lovelace, author of the Betsy-Tacy series.

Why is Dakota land a hotbed for children’s writing? Maybe it's something in Minnesota’s sky blue waters.

Welty runs his mouth off at lincolndemocrat.com.