Pushing hard on back roads and still getting 42 mpg 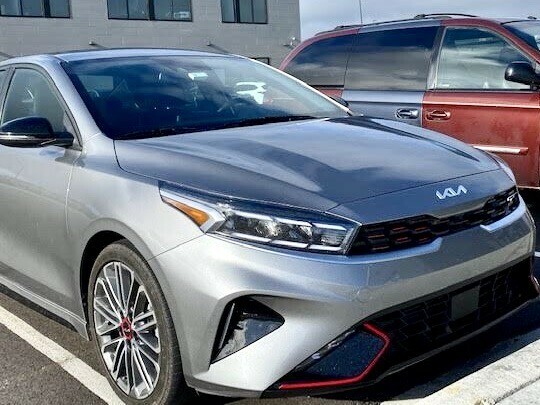 The drive from Duluth to Ely is about 100 miles if you go along the North Shore of Lake Superior and turn north on Hwy. 2 at Two Harbors, a nice two-lane that eventually runs into Hwy. 1, a twisty, curvy highway through the north woods to Ely.

I’ve driven that road many times, and if you ever get a chance to drive a good-handling car over those highways, do it.

This particular occasion found me test-driving a 202 Kia Forte GT, one of a fleet of new Kias that has met nothing but high praise from every meaningful evaluative outfit in the country.

The regular Forte is a nice, presentable compact car, about the size of the Civic, Corolla, Mazda3, and its Hyundai cousin, the Elantra.

It comes with a 2.0-liter 4-cylinder and gets decent gas mileage.

But the Forte GT steps up in all sorts of significant ways. The 2.0 is replaced by the superb corporate 1.6-liter 4, with 201 horsepower, and a 7-speed dual-clutch automatic transmission with paddles affixed to the steering wheel for manual control.

The sport-tuned suspension is firmer, and it’s complemented by 18-inch wheels with low-profile Kumho tires. Dual exhausts and various trim items on the interior’s new-fabric tough seats and a Harmon Kardon audio system.

All of those goodies, plus drilled aluminum pedals, boosts the price of the Kia GT, but only to a final sticker of $26,840 – and after you drive it, you’ll probably accept my theory that it might be the best bargain in the compact segment.

So when you take a special handling vehicle with good power and put it on all those twisty curves from the North Shore to Ely for the annual Blueberry Festival, you’ve got a truly entertaining combination.

I did not anticipate, however, the final reward on the trip.

Kia, incidentally, was named the top auto-maker in the industry in the JD Power survey of most satisfied customers during the first three years of ownership. Kia’s Korean cousins, Hyundai and Genesis, gave the trio three of the top four in the rankings. That comes on the heels of the Forte being named the top compact by the same organization.

The first couple of times I drove the Forte GT I was not overwhelmed. I thought Kia had made the same mistake many companies make, that by mounting oversize wheels you automatically get good handling.

More often than not, all you get is a harsher ride.

But as my wife, Joan, and I loaded up a cooler with water and iced tea and hit the road for the Blueberry Festival, I was quickly impressed. The Forte GT handled well, and when you put it in Sport mode and got into some of the tighter curves, it held its footing with absolute perfection.

Coupled with the corporate lane-holding feature, the Forte was a joy to drive. It also was easy to park, within two blocks of the overflowing Ely park where all the usual suspects of t-shirts and trinkets and unique items were lined up.

So, of course, were the ubiquitous blueberry treats, beginning with a large slab of pie and what seemed like a half-pint of vanilla ice cream. What I didn’t see, and we looked intently, was the usual booth where Florencia sets up her wares from Henry’s Shoe Repair. Florencia provides the classiest craftsmanship in making leather belts. I wear one of the three I have bought from her, and I’ve bought them for both our sons, Jack and Jeff.

When we left the festival, we drove through town and I parked in front of Henry’s. Sure enough, she was tending to a study stream of customers, and after asking her to alter one of my belts, I realized it was time to buy myself an early birthday present with a wide, dark brown, custom-fitted new one.

Then it was onto the highway for the return trip to Duluth. I zeroed the odometer and off we went. I will admit that I expanded the speed limit on a few isolated parts of that road, and I was surprised that the harder I pushed the Forte GT, the better it handled.

The phrase “handled like it was on rails” is a cliche that is overworked these days, but it applied perfectly to that car on that road on that day.

When we got back to town, we decided to drive on out to West Duluth to catch a Duluth Huskies Northwoods League game for college players. When we got to Wade Stadium, I clicked the odometer over and saw we had gone exactly 100 miles – and I had gotten 42.7 miles per gallon!

Yes, even on that road, at those levels of pushing it, it far exceeded the EPA estimates of 27 city and 35 miles per gallon highway.

I can’t imagine what we might have attained if I had cruised at a more moderate 50-55 without pushing hard through every curve, but it could only have been better than the 42, which are hybrid numbers in a vehicle without battery assist and with a willing turbocharger eager to get the power on.

Joan, who can always offer meaningful comments when I get carried away with a vehicle’s performance and handling, said, “Wait until you see the trunk.”

Sure enough, the rear seats were adequate for a compact car with a sweeping roofline, but when I lifted the hatch up over the dual exhaust tubes, it displayed a cavernous rear luggage and storage area.

Kia is making the biggest noise these days with its all-nw EV6 electric car, and its Carnival minivan, Sorento midsize SUV and its new Sportage compact SUV. All of them won some sort of award for 2022.

But don’t overlook the Forte, and don’t think because you’re getting a generous 2.0 engine in the base Forte that going to the smaller 1.6 turbo in the GT can’t be that good.

Trust me – it IS that good!