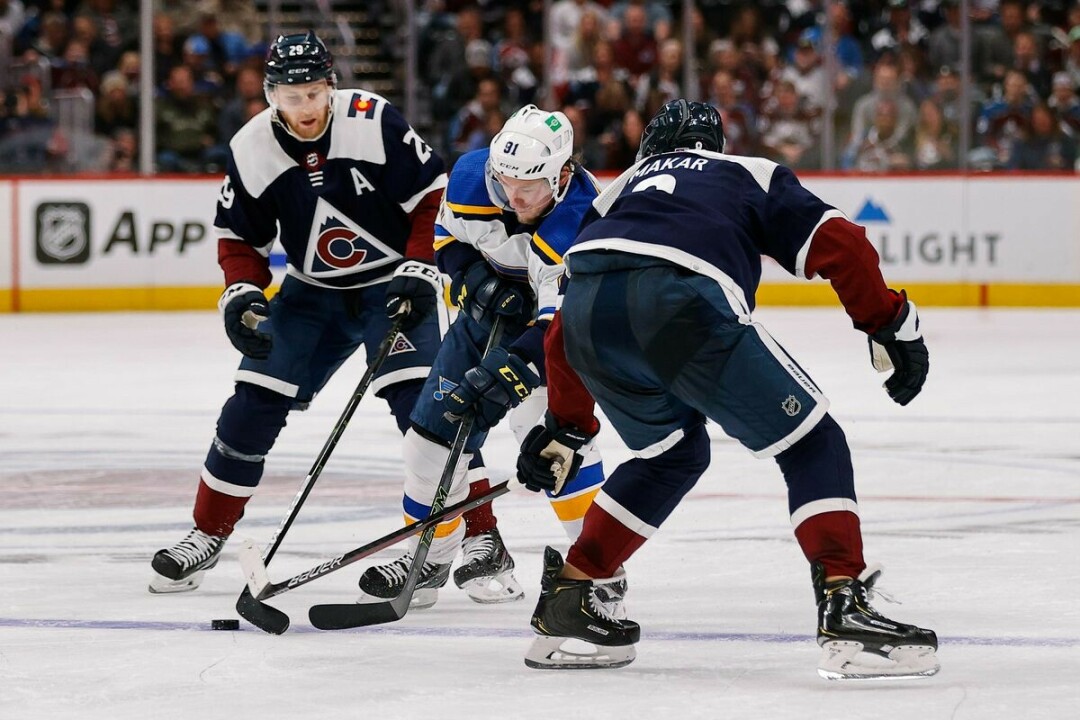 The Blues and Avalanche in Game One of the 2nd round Stanley Cup playoffs.

It is currently 4-0 after two frames and I believe the Oilers will earn a 2-1 series lead this evening. In addition, they have made a big enough statement within this game to say with a fair amount of accuracy that tonight’s tilt may have effectively put an end to the Flame’s hopes to advance out of this round and on to the Western Conference Final.

They have had absolutely no response to the Oiler attack tonight. The Oilers have been too fast, they have got open to make plays too easily, and for the most part the Flames appear unable to do anything about it.

As far as the remainder of the tourney goes, some tremendous hockey has been played. Here’s an update:
TBL vs. FLA, in a game played earlier today the Lightning beat the Panthers 5-1 to take a 3-0 series lead. G4 takes place tomorrow night and the Bolts can put the Cats out of their hockey misery with a victory.

Today’s game was much closer than the final score as Tampa’s total included two empty-net scores. The Lightning has outscored FLA by 11-3 in the three games played so far. On the FLA side, it would be easy to say that the curse of winning the regular season Presidents Cup for most wins is still very much for real. Very few Presidents Cup winners have ever had Stanley Cup success and it appears that will hold true again.

But for all of the Cats’ scoring (#1-reg season), their PP is a paltry 3.6%. They are making the MN WILD look like PP wizards. I also believe that the Bolts Head Coach Jon Cooper is out-coaching former WILD assistant and now rookie Head Coach for FLA, Andrew Brunette.

NYR vs. CAR, the Rangers returned home to Madison Square Garden down 0-2 to the Hurricanes and put on a solid performance to gain a 3-1 win this afternoon in the middle game of today’s triple header.
Oddly enough, the Canes have yet to win a road game in the 2022 playoff. The Rangers dropped 2-1 and 2-0 games in Raleigh to begin this series. They were in both games and could’ve won either one. I had picked NY to win this series in my original bracket and I’m sticking with it.

As of this evening I believe the Rangers will win in Raleigh before the Canes win in NY. I have it going seven games.

EDM vs. CGY, in the First Battle of Alberta in 31 years it’s fair to say that this might be the most intense series of the playoffs by the time they conclude. I originally had the Flames being ousted by Dallas in the first round and that is almost exactly what happened. But CGY hung on and won G7 in an OT thriller for the ages. EDM allowed the LAK to get a 3-2 lead after five tilts before going to another level and finishing the series in seven games. They owned G6 and G7. This series was hard to make a guess on though.

EDM has two of the best five players in the world and the Flames play a hard-nosed style that takes most teams off of their game. The Flames got off to a quick start in G1 by going up 3-0 in just over six minutes. The Oilers would get on the board but CGY would take the lead to 6-2 at one point.

Then, in one of the most remarkable comebacks I’ve seen in this league, the Oilers would tie the game at six each before losing 9-6. Notice was served though, and it said the Flames could not stop the Oilers once they discovered they could score almost at will.

In G2 CGY got an early lead again. But after going up 3-1, EDM reeled off four straight tallies for a 5-3 win that tied the series at a game each.

Tonight in EDM, after a scoreless first period the Oilers put a four-spot on the board in the second frame and made the Flames look like a bunch of pylons out there. These goals were all scored off of rush plays with Evander Kane getting a natural hat trick within a six-minute span. And they made it look pretty easy.

This win was decisive to the point that I can’t see how the Flames can change this series’s path. My revised bracket had CGY taking the series in six tilts. I now see EDM emerging as the winner here.
STL vs. COL, in G1 STL scored the first goal. The Avalanche scored twice in the middle frame but the Blues came back to tie late in the third to get this contest to OT.

Eight minutes in though, the Avs notched the winner for the series lead. STL wasn’t having a pity party though, because they came back with a decisive 4-1 win in G2.

Saturday eve in The Gateway City the Blues scored first and then a possible series-changing event occurred. The Avs Artturi Lehkonen took a shot on STL netminder Jordan Binnington. It hit the tender and dropped about three feet in front of him. The Blues Callie Rosen and the Avs Nazem Kadri raced for the puck. with Rosen arriving first. But both skaters crashed into Binnington and after an injury timeout, it was determined that he had to be pulled from the game.

Because of Kadri’s history versus STL the angst of the Blues fans went through the roof. Ville Husso came in to play, but gave up the next three goals before STL tallied late in the third to make it 3-2 COL going into the 2nd INT. The Avs would score late in the 3rd and add an ENG for a 5-2 final and a 2-1 series lead.

I’ve replayed the collision about 50 times at a variety of speeds. I could find no intent on Kadri’s part to “run” Binnington. Several expert analysts supported this opinion.

After the Blues skated this morning, it was announced that Binnington had a LBI and would not return for this round. Now Kadri has STL police protection because some moronic Blues fans decided to go the death threat and racism route. (Kadri is Muslim) I am dismayed, to say the least.

But, Kadri not only has a playoff and regular-season history of bad decisions that were injurious to opponents but has had it personally with the Blues.

In last season’s playoffs, he was suspended eight games for a hit on the Blue’s Justin Faulk. Up through last year’s action upon Faulk, I viewed him as a reckless and dangerous player. He has a load of talent and ability and, when interviewed comes across as almost all hockey players do; he is a likable guy.

In viewing him this season he seems to have resolved to clean up his game and focus on the game itself. He had 28G/59A/87 pts in 71GP, and all I can say is that G4 will be pretty interesting in STL!