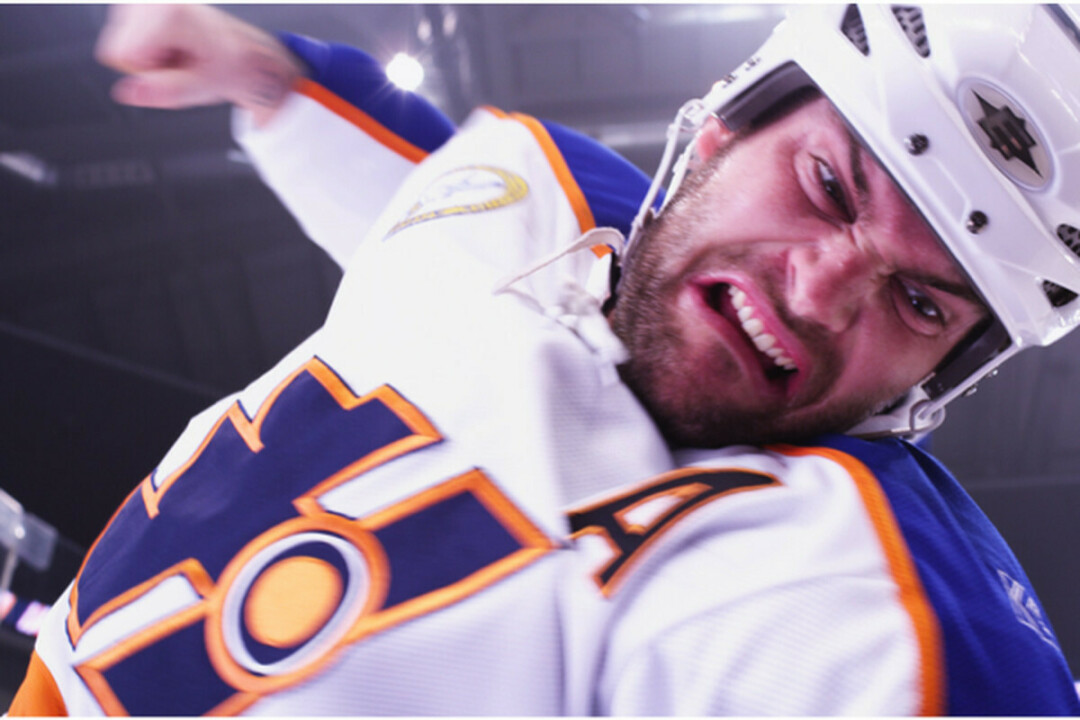 Friends will tell you I have despised sports all of my life for a multitude of reasons that I don’t need to go into here.

But every so often there is a good sports-themed book or movie. I’m thinking of things like W. P. Kinsella’s excellent novel "Shoeless Joe," which was made into a watered-down movie by changing one of the characters and calling it "Field of Dreams", or "Hoopla," Harry Stein’s fun novel about a sportswriter. (I can’t believe it has not been made into a movie.)

Even better for me is when sports and true crime intersect, as they did in Eliot Asinof’s "Eight Men Out" and John Sayles’ subsequent faithful film version in 1988, about the 1919 Black Sox scandal.

I only learned long after first seeing this 2011 film some years ago that it is based on a book written by former enforcer Doug “The Hammer” Smith, who spent time in amateur boxing before learning how to skate at the age of 19. His book is :Goon: The True Story of an Unlikely Journey Into Minor League Hockey."

The hero in the movie is Doug Glatt (played very convincingly by Seann William Scott). While he seems to be the very definition of dim-witted, he is also a nice and polite guy. His father (Eugene Levy) and brother (David Paetkau) are doctors, but Doug is working as a bouncer and feels he’s not living up to the family potential.

When he goes with his loudmouthed friend Pat (Jay Baruschel, who also cowrote the script) to a minor league hockey game, Pat starts hurling insults at a member of the opposing team. When Pat calls the player a faggot, the player charges at Pat. Doug steps in, cold cocks the player and with a head butt splits his helmet open.

The next day Doug gets a call from the manager of the struggling home team, the Halifax Highlanders, who offers Doug a chance to try out for the team.

Now, I hate the modern trend of cheap and easy gags in comedies. Normally, I would have hated the cheap shot joke of Doug showing up for the tryouts in a pair of white women’s figure skates. It just wouldn’t happen. His pal, Pat, who attends the tryout with Doug, wouldn’t have let that happen. He’s too much of a hockey nerd to let his friend do that. But happen it does, and I let that one slide because it’s the only weak moment in this otherwise steadfast comedy.

Doug earns a spot on the team by beating the crap out of his other team members during his first time on the ice.

Doug learns to skate just enough to do his job – protect star player Xavier LaFlamme (Marc-André Grondin), who in an earlier game had been concussed by Doug’s inspiration, Ross “The Boss” Rhea (Liev Schreiber).

Schreiber puts in a perfect performance as the savvy old enforcer watching the new guy climb up the ranks. He knows his own career is nearing its end, but not before he and Glatt must inevitably meet on the ice. That historic match-up concludes the film.

A subplot has Doug meet and fall for Eva (Alison Pill), who already has a live-in boyfriend.

I am also not a fan of romantic comedies, but the scenes between Scott and Pill are magic. His awkward goofiness in her presence seems perfect and real. I have to attribute that to Scott’s ability to invest the big, dumb lug with such heart that you cannot help yourself from liking the guy and hoping he eventually gets the girl.

In fact, it’s pretty easy to like the characters in this good-hearted but bloody movie.

Canadian actor Kim Coates plays the profane coach of the Highlanders, and he’s always good – he was Tig in Sons of Anarchy.

In 2017 a sequel was released "Goon: The Last of the Enforcers." In addition to cowriting, Baruchel also directed the sequel, and has suggested there might be a third Goon in the future.

While the sequel has its moments, not all the characters retain their charm from the first movie. Doug and Eva are married now, and with a baby on the way. The cute vivacity of actress Alison Pill in the first movie is gone in the second. She could be another person entirely.

But Scott is again perfect as Doug, and Schreiber returns to reprise his role.

The subplot with the new owner and his angry, bad-boy son seems pure Hollywood cheese rather than natural Canadian bacon, but it all comes down to showing off the main character’s ultimate goodness, so...

I hope there is a third Goon, but I can’t imagine where it would go, for it surely seemed as if Doug the Thug had thrown his last punch at the end of No. 2.