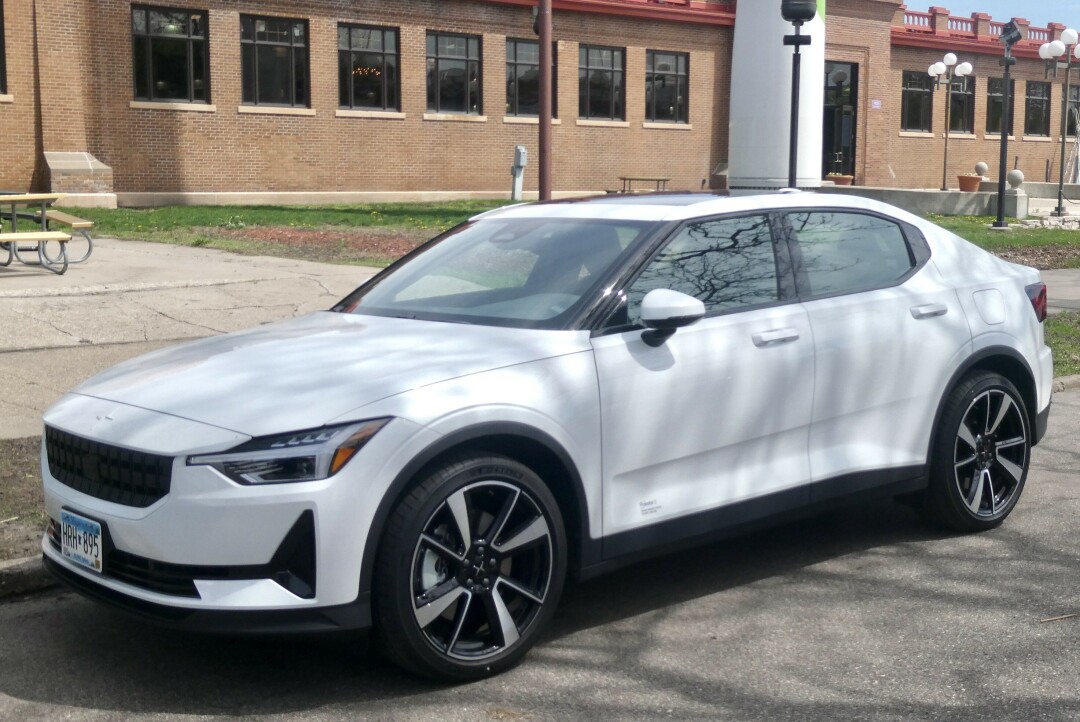 From Volvo comes the Polestar 2, pure electric from Sweden. Photos by John Gilbert.

The first two vehicles I had special permission to drive around a set course inside the Minnesota State Fairgrounds was one of the two most spectacular vehicles on the face of the earth – a Polestar 2.

The second one was the Audi e-tron, my nomination for the most spectacular vehicle available.
Both are sleek, ultra futuristic and luxurious, and both are pure electric vehicles (EV), which are the primary attraction at the 49th annual Twin Cities Auto Show.

They accelerated briskly, showing off their capabilities to go 0-60 in about 4 seconds. Of course, we were adhering to the strict limit of 20 mph on the nearly deserted fairgrounds streets. They clearly live up to all the publicity and promotion, and are reason enough to attend the show.

The thought occurred to me, as we made the drive from Duluth to attend the media preview last Friday for the Twin Cities Auto Show, that the show might be the only function that truly benefitted by the COVID-19 pandemic.

A year ago, nobody was eager to go out and mix it up with a crowd of people that could spread that horrible disease, which still threatens us with assorted variants. The only way to keep the show going last year was to move it outside.

Out of desperation, the new vehicles were put on display last year at the Minnesota State Fairgrounds, on Snelling Avenue in St. Paul, and it worked so well the show’s organizers and dealerships decided to do it again this year, on purpose.

The 49th annual Twin Cities Auto Show is going on right now, and runs through this weekend, ending Sunday, May 22.

There always have been good reasons to go to the show to evaluate future family vehicles where they can be compared to various others all in one location, but this year the show had gotten lucky with timing, and its show is a genuine attraction. Every car buyer is curious about the newest models, and particularly all the electric vehicles, and what’s going on to make them such a logical attraction for our driving future.

For example, we drove to the show in a new Chevrolet Equinox, an RS model, which is new for 2022, with trim and features. My older son Jack accompanied me, since he often shoots photos and serves as my assistant for Newcarpicks.com.

As I turned into the main entrance to the fairgrounds, and tried various streets searching for the media meeting place, called Electric Vehicle Neighborhood, I realized that as modern and up-to-date as the Equinox is, it seems old-fashioned when you realize the futuristic EVs being shown at the show.

The Twin Cities Auto Show has been an attraction every year in the Minneapolis Convention Center, and before that enormous facility was built, the Minneapolis Auditorium. No, it wasn’t near the caliber of the Detroit, Chicago, Los Angeles or New York auto shows, which are the “big four” in the U.S., and are the best this country can do to compete with the Frankfurt, Germany, show, or Geneva, or Paris, for that matter.

Instead of being able to attract all of the world’s top auto manufacturers, shows the size of the Twin Cities show rely on local or regional dealers to bring their latest vehicles to create an opportunity for area folks to show up and run the various booths to help consumers compare various vehicles they might be considering for purchase. For that reason it was always worth attending.

There were a fair amount of media types gathering there to hear about the show, but we were mainly interested in checking out what new EVs we could drive.

Turns out, we were part of the loosely organized media contingent, and we might have been the only ones who wanted to drive. The plan was to have media types ride around the proscribed course with a professional driving instructor.

A fellow who seemed in charge said we could only ride, not drive.

“You can drive tomorrow, but today you can only ride,” he said. I explained that we only came down for the day and were returning home Friday afternoon, so we wouldn’t be there to drive on Saturday.

The great thing about these instructors is they also teach auto racing enthusiasts how to drive race cars at Brainerd International Raceway, and because I was just starting my career as a journalist and car enthusiast at the Minneapolis Tribune when BIR was built as Donnybrooke Speedway, they all knew me from those days. They also knew I had been road-testing and writing about new vehicles in an unbroken streak that now has reached 50 years. And counting.

So after serving all the media some wonderful catered sandwiches and caramel rolls, the rest of the media scattered and took their sound-bites with them. Jack and I headed back to the accumulated EVs.
I felt bad for Jack because he didn’t get to drive, but he rode along in the three EVs I most wanted to check out.

The Polestar is being built by Volvo under that name, as its new EV arm, and while various Volvos are carrying electric power – including the official “Car of the Show” Volvo XC-90 Recharge – the Polestar 2 is already the revision all-electric concept of Volvo’s first attempt.

Polestar 1 has two electric motors at the rear, and Volvo’s 2.0-liter 4-cylinder supercharged and turbocharged to get you 619 horsepower. But it costs $155,000, which means the company had to scale it back, and forward, at the same time.

Compared to the Polestar 1, which looks like an exotic sports car, the Polestar 2 is more of a streamlined SUV shape for hauling people. Swiftly.

Next, we did a brief drive in the Audi e-tron. Audi makes various e-tron vehicles, but the most exotic are a pair of GT models – the GT and the RS GT. The RS e-tron T is the first vehicle brought into the U.S. by Audi Sport, the Ingolstadt, Germany, company’s high-performance arm. It has 637 horsepower and 612 foot-pounds of torque, and, of course, all-wheel drive.

The look and luxury are unmatched, if you want a sports car that is really a 4-door sedan. Cost is out of sight at $139,900.

The Audi e-tron GT has “only” 522 horses and 472 foot-pounds of torque. It shares the same stunning body shape.

Going down the scale, Audi also has the Sportback and a Q4 Sportback that are scaled down into the low $40,000 range.

The e-tron I drove was so luxurious and solid you almost forgot that the sound you hear is – nothing. All EVs share the silence of electric power operation. 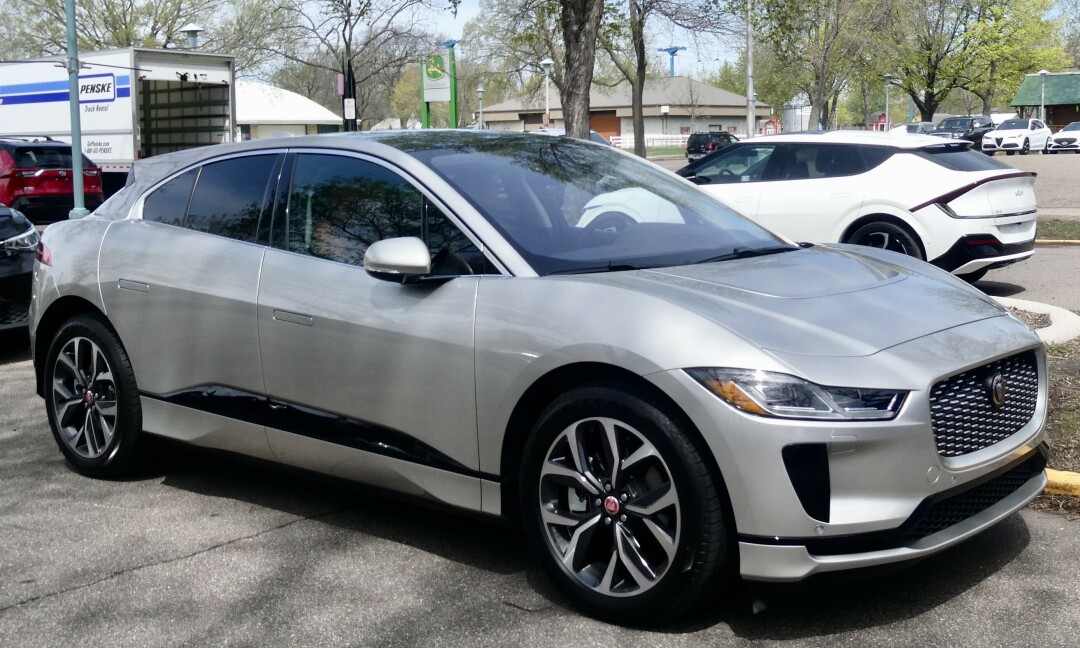 The Jaguar i-Pace is a sleek electric SUV, and Ford had its Mustang Mach E while Jeep had the Wrangler 4XE and Volkswagen had its ID.4 in the mix.

But I gravitated to the most mainstream of all EVs, the South Korean pair of Hyundai Ioniq 5 and Kia EV6. They share drivetrains, but look completely different, and the EV6 is about a foot longer although the Ioniq 5 has about a 4-inch longer wheelbase.

The Ioniq 5 looks more like some sort of futuristic transportation module next to the sleek Kia EV6’s shape.

The shape of the Ioniq 5 is completely different from the returning Ioniq (without the 5), and its melding and overlapping creases make it a masterpiece of artistic design.

Such angular shaping has carried the Sonata and Elantra sedans to new heights, and I anticipate the Ioniq 5 will make that sort of impact on the EV market – especially starting out under $40,000 and reaching up to as high as $60,000.

The auto show is arranged for the car booths and stands to be gathered near each other for ease in walking among them. Also, an array of fair food is being featured, so you can get your corn dogs or Sweet Martha’s Cookie fix right now, among other treats, and munch your way from display to display.

Adult tickets are $20, teenagers $5, and 10 or less free. Entry is through RAM Gate 16, and free parking is available in the Robin Lot, accessible via Hoyt Avenue off Snelling.

All sorts of sponsorship help makes the show a success, and when you open the front cover, you see a full-page add to “Take on the world in style,” 2022 Chevrolet Equinox with all-new RS trim, from Heartland Chevy dealers. The one in the ad is red; ours for the week was glistening white.

As we headed up Interstate 35, we enjoyed listening to the Twins and a couple of NHL Stanley Cup games on the satellite audio system, and our Equinox cruised effortlessly at 70 in smooth comfort.

No, it wasn’t electric. Maybe next year, when my biggest prediction is that the Twin Cities Auto Show will have made its outdoor, fresh-air presence a rite of spring that other auto shows will copy. 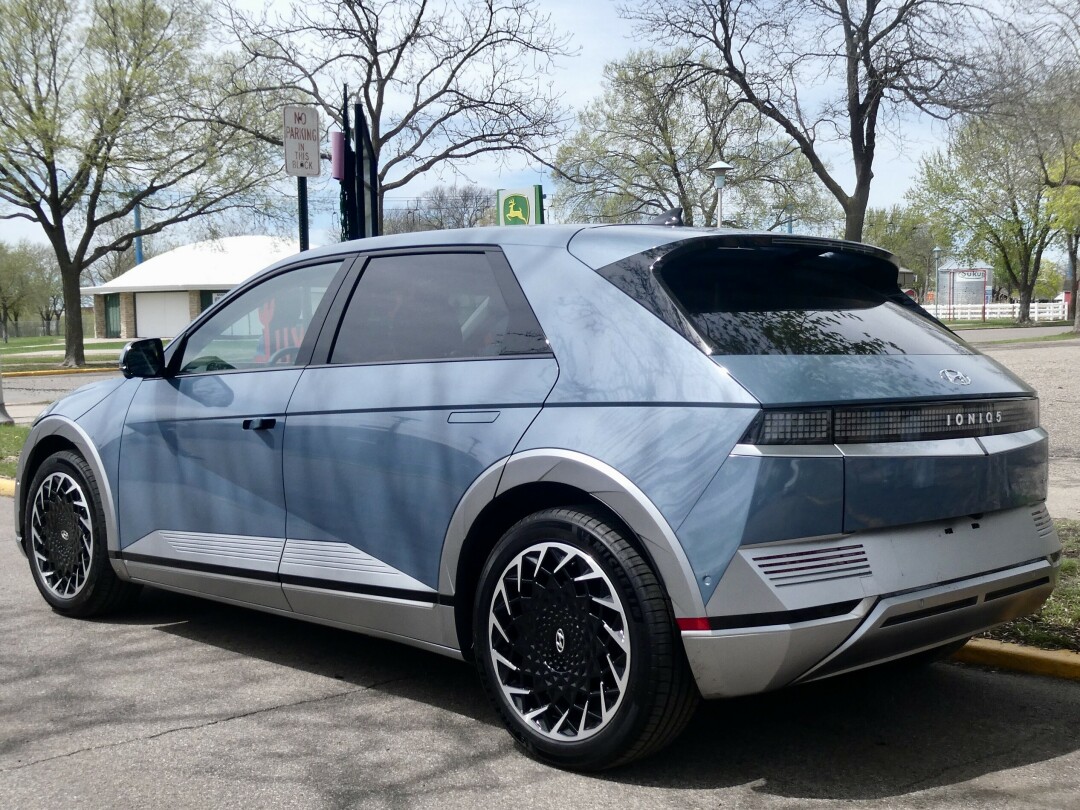