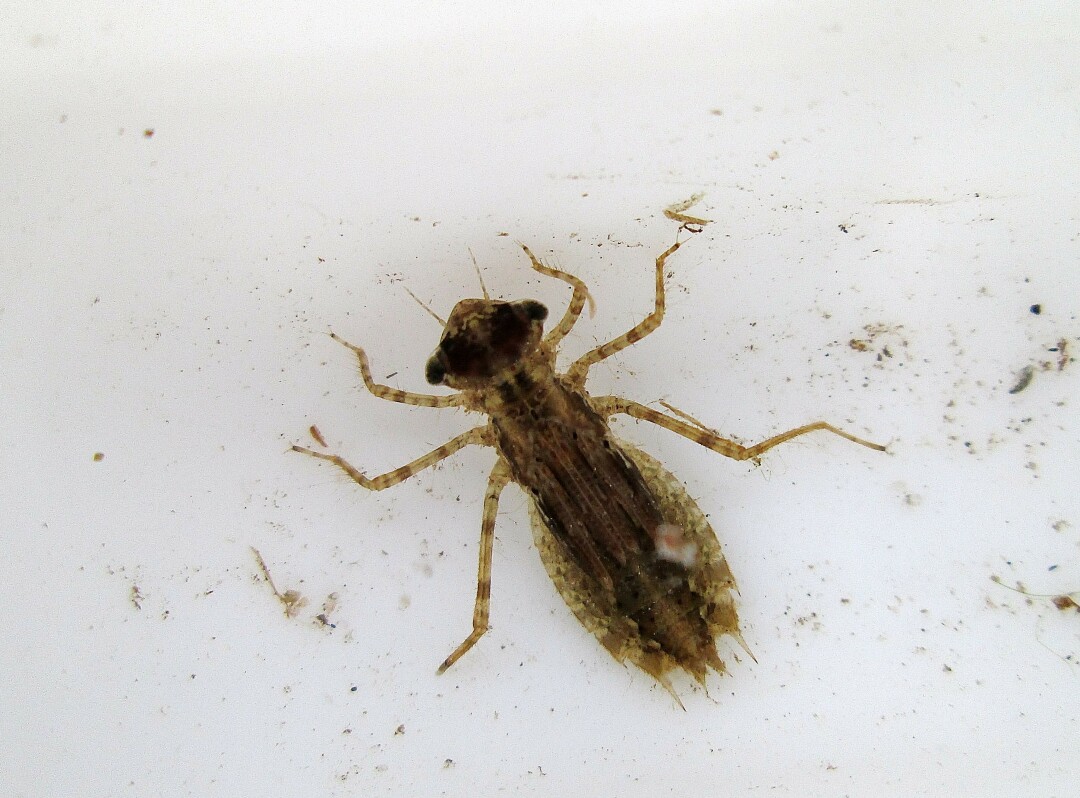 This little aquatic monster is a dragonfly in the middle of childhood. Just like human kids, they grow up wild! Photo by Emily Stone.

“Welcome to Perry Lake and your Growing Up WILD field trip,” I smiled at a small group of kids and adults on our first field trip of the spring.

“Lakes are cradles for all sorts of babies as they grow up,” I told the group. “How many of you like to play in the mud and water as you grow up wild?” The little ones – only 3 and 4 years old, grinned.
One student looked up at his teacher. “I love mud best!” I chuckled in agreement.

Then we all transformed ourselves into dragonfly eggs by hugging our knees. We wiggled, and grew, and hatched into crooked-legged-nymphs.

Then our job was to eat. “What do you like to eat to help you grow?” I asked each kid. The answers included noodles, spaghetti, mac and cheese – do you notice a trend here?

“Well dragonfly nymphs eat snails and minnows,” I declared. “How would you like that?”
Their faces scrunched up just as I’d expected.

“Then, when we’ve eaten enough, we POP into dragonflies and zoom around and eat mosquitoes!”
The chaperones cheered at that.

Our next task was trying to catch some actual dragonfly nymphs in the vegetation at the edge of the lake. I demonstrated proper pond net protocol, capturing a few dead leaves, and then turning the net inside out into my big, flat tub of water.

Staring intently, I checked for any sign of success. When two demo swishes of my net turned up no sign of life, I got a little worried. Ice only went out a week ago, were the critters still hiding elsewhere?

Still, I handed out nets to the kids, and they ventured off along the shore to try their own luck, each with an adult or two in tow.

Of course, someone started on the dock – and was soon shouting about a minnow! The tiny fish – only about an inch long – was striped with dark parr marks. This helps them camouflage into the tall, thin weeds.

I stood sentry at the tub to help kids empty nets and catalogue their catch. Out of the corner of my eye, I noticed the adults were visiting the bin of extra nets. Within a few minutes, everyone was on a mission to catch more critters. A chaperone later told me the adults got competitive about who could net the coolest finds.

There’s no age limit to being a kid on my field trips!

Soon our tub was home to a giant tadpole – just its bulbous head was an inch long, and the tail added another two – and a tiny turtle. Actually, they were the same size.

The difference, of course, is that the tadpole already had legs and was about as big as they get before becoming a frog. In contrast, the turtle must have just hatched last fall, and was about as small as you’ll ever find them!

Finally, I spotted a tiny monster among the leaves just deposited from an adult’s net.

“Gold star for the day!” I exclaimed! She had found the dragonfly nymph we’d just been imagining.
The nymph stage of a dragonfly’s life is essentially their childhood. After hatching from a tiny egg, they shed their exoskeleton several times as they grow.

Dragonfly nymphs may spend anywhere from several weeks to several years growing through the instars. The cooler and shorter the summers are where they live, the longer it takes to emerge as an adult. In the meantime, they rule the bottoms of lakes and rivers as fierce predators.

To catch food, a nymph draws in water through their anus, and clenches their abdominal and thoracic muscles against the water-filled rectal chamber. The amazing amount of pressure now trapped inside the nymph’s body cavity pushes out their labium, or toothy lower lip, in a high-speed strike.

The lightning attack may earn the tiny predator a meal of tasty mosquito larvae, a tadpole, a small fish or even another species of dragonfly nymph.

The dragonfly nymph’s hydraulic system isn’t just used for hunting. By jetting water out the way it came in, nymphs can propel themselves forward at a speed of 10 centimeters per second.

That power of acceleration can help when they are on the hunt, and also allows for quick exits if they become the hunted.

As the water goes in and out, it passes by gills in the dragonfly’s rectum, and helps the little critter absorb oxygen.

If they survive the winter, dragonfly nymphs will use the abundance of spring and summer to continue growing through their required eight to seventeen instars (depending on the species) before their final metamorphosis into adulthood.

The process is astounding. From a split down the back of a scraggly, brown, bottom-feeder emerges a colorful, fairy-like being with delicate, dexterous wings.

There are many different ways to be a kid in nature. Some eat pasta, others eat snails. Some live in the mud, others just play in it. Some shed their exoskeleton as they get bigger, others buy new clothes.

No matter whose kids I’m observing, though, it’s fun to watch them grow up wild!

Author’s note: Portions of this article are reprinted from 2014.

Emily Stone is Naturalist/Education Director at the Cable Natural History Museum. Her award-winning second book, Natural Connections: Dreaming of an Elfin Skimmer, is now available to purchase at cablemuseum.org/books and at your local independent bookstore, too. For more than 50 years, the Cable Natural History Museum has served to connect you to the Northwoods. The Museum is now open with our exciting Growing Up WILD exhibit. Follow us on Facebook, Instagram, YouTube, and cablemuseum.org to see what we are up to.