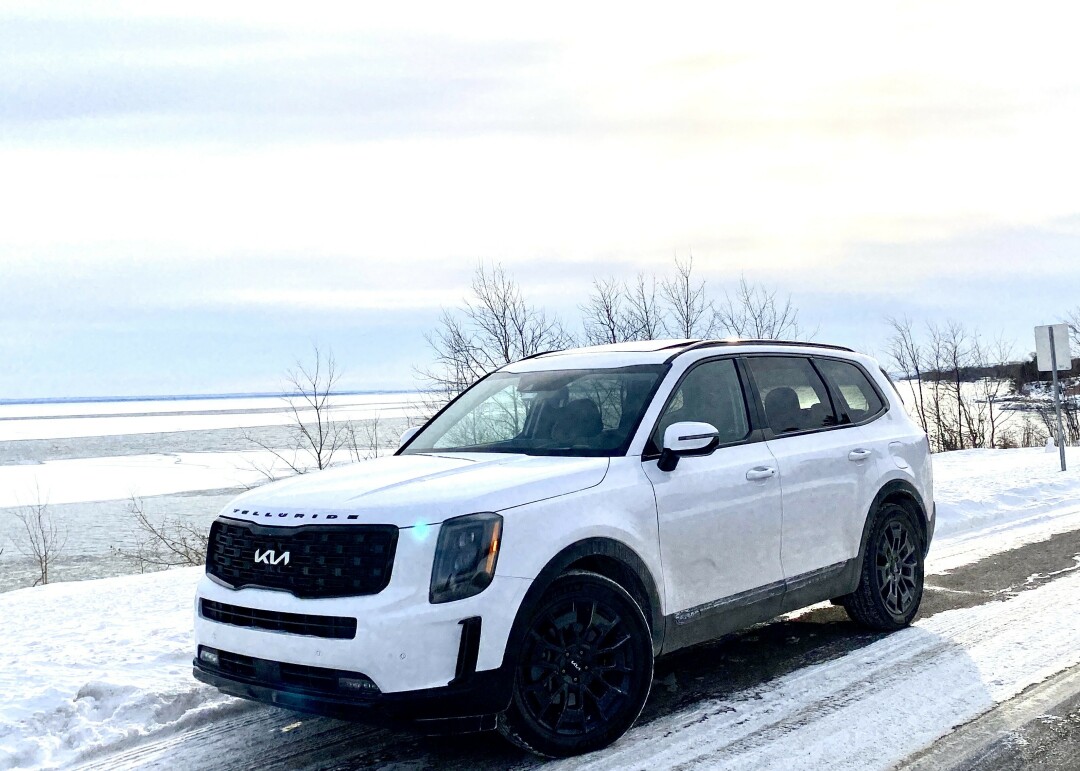 The rise of Kia as a car-maker has been nothing short of spectacular, running in parallel with partner Hyundai as the South Korean tandem has swept up from the lower reaches of prestige to the upper echelon in the swift decade of their partnership.

Kia is establishing its own identity these days, rather than just getting a version of some Hyundai model, and the new Sorento is one of the more recent examples. A few years ago, the Sorento would have been a nice, midsize SUV that was pretty much a warmed over Hyundai Santa Fe.

But the new Sorento is a perfect example of how Kia is making its own way.

The breakthrough for Kia might have come four years ago, when it introduced the Telluride – the largest Kia SUV and one that attained global accolades and SUV-of-the-Year honors. It felt larger than midsize when you’re riding in it, with all the roominess in the second and third rows that can seat up to eight.

It comes with only one engine – a 3.8-liter V6 with 291 horsepower that moves the Telluride with force and impressive feel.

An 8-speed automatic transmission shifts smoothly and proves the advantage of being built in-house by the company, which also builds the platform and the engine, to create a firmly comfortable and attractive psckage. It will tow 5,000 pounds and almost single-handedly created a new image for Kia with its distinctive grille and handling agility.

The SX Prestige model Telluride I was able to test-drive for a week when we along the North Shore of Lake Superior were still experiencing winter’s stubborn refusal to stop-already with snowstorms near Duluth, showed off the luxury possible with the SX Prestige equipment.

Off the option list came the Glacial White Pearl paint job, the Nightfall Edition package, which consists of black grille and trim and the exclusive wheel design above and beyond the “normal” EX luxury Telluride, and the SX Prestige package adds head-up display on the windshield, Nappa leather seats front, rear, and way-back, with the first and second rows heated and ventilated, rain-sensing wipers, and the towing package with the hitch, and self-leveling rear suspension. 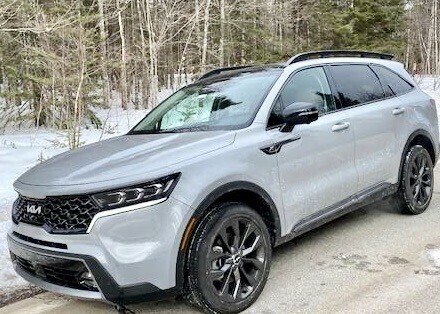 Kia redesigned its new Sorento with its own Telluride in mind.

Those last two are more impressive than they sound. If you venture across the lane marker, you get a warning buzzer to alert you. And now that you are in your lane, it will see to it that you follow the proper trajectory to stay there.

It is not self-driving, although it comes close to keeping you following the center of your lane, even around curves.

The test Telluride had captain’s chairs for the second row, and a fold-down third-row bench seat, with less room than the enormous second row, but adequate for kids of all sizes or adults for short hops. The configuration can also be ordered to hold eight, rather than seven, at your choice.

After three years of accolades for the Telluride, Kia has continued to upgrade all its models, and when it was the Sorento’s turn, Kia didn’t miss. It wisely took some of the most impressive design features of the Telluride and adapted them to the smaller, midsize Sorento. And they fit very well.

The test Sorento was not only the SX-Prestige unit, but topped that with the X-Line trim features that promote an adventurous image, like maybe you can do some serious off-roading. I wouldn’t, in such luxurious vehicle, but you can feel comfortable heading for the lake cabin with its skinny one-lane bumps and rugged requirements.

Or the unpredictable terrain of Duluth streets!

Surprisingly, the shorter, more compact Sorento has three rows of seats, too, although the third row definitely is tight for legroom. It also has two captain’s chairs for the second row.

The exterior color of the Sorento was Wolf Gray, and the interior was X-Line Rust, a bright orange color on the quilted leather.

Otherwise, the Sorento contains all the safety and comfort features of the larger Telluride, including an oversized sunroof, in a more maneuverable length, for a base price of $43,090 and a total sticker of $45,120. It comes with a Bose Premium Audio system, rather than the Telluride’s Harman-Kardon, but we’re splitting hairs here, or at least ear-penetrating sounds, to differentiate.

The Sorento also has LED projector headlights, taillights and foglights.

But the biggest reason I find the Sorento to be a worthy alternative to at least consider next to the Telluride, is that while the Telluride has the powerful 3.8 V6, you get the choice of  three engines for the lighter and more compact Sorento.

The base engine is an adequate 2.5-liter 4-cylinder, while the first upgrade – and the way my test-Sorento came – is the 2.5-liter turbocharged for more power, to the tune of 311 foot-pounds of torque.

The best engine available is the hybrid, which combines the corporation’s amazing 1.6-liter turbo with a potent electric motor for the most power of all. A plug-in hybrid is supposedly coming this year as a fourth engine, with even higher fuel efficiency.

As it was, the Sorento had an attractiveness that may come naturally as sibling to the Telluride, and we got 27.2 miles per gallon in combined city-highway driving. Comparing the Telluride’s 19-mpg city/24-mpg highway EPA estimates, the Sorento shows 22 city/27 highway, so we were well-satisfied with the 27.2.

The other place where Kia is well-grounded is in safety, with all the electronic warning devices housed in a vehicle that is one of the highest for percentage of high-grade steel in manufacturing, which adds an extra wrap of security in the event of an accident.

Both vehicles are assembled in Kia’s high-tech plant in West Point, Georgia, and the Sorento’s engine is built in the U.S. as well. The Telluride 8-speed transmission is USA built, while the Sorento’s 8-speed comes from Korea – although it is a high-tech dual-clutch unit.

The solid, safe feel of both the Sorento and Telluride are evidence of how and why Kia rose from the lowest-rung grades on the Powers initial-quality survey and has climbed rapidly upward to now stand among the top three, with Lexus and partner Hyundai. Korean technology has zoomed upward along with the advanced designs and reputation.

About the time you might consider evaluating the 2022 Telluride and Sorento, Kia has just introduced its latest vehicle makeover – the Sportage compact SUV. But that’s another story.