Cousins in the woods 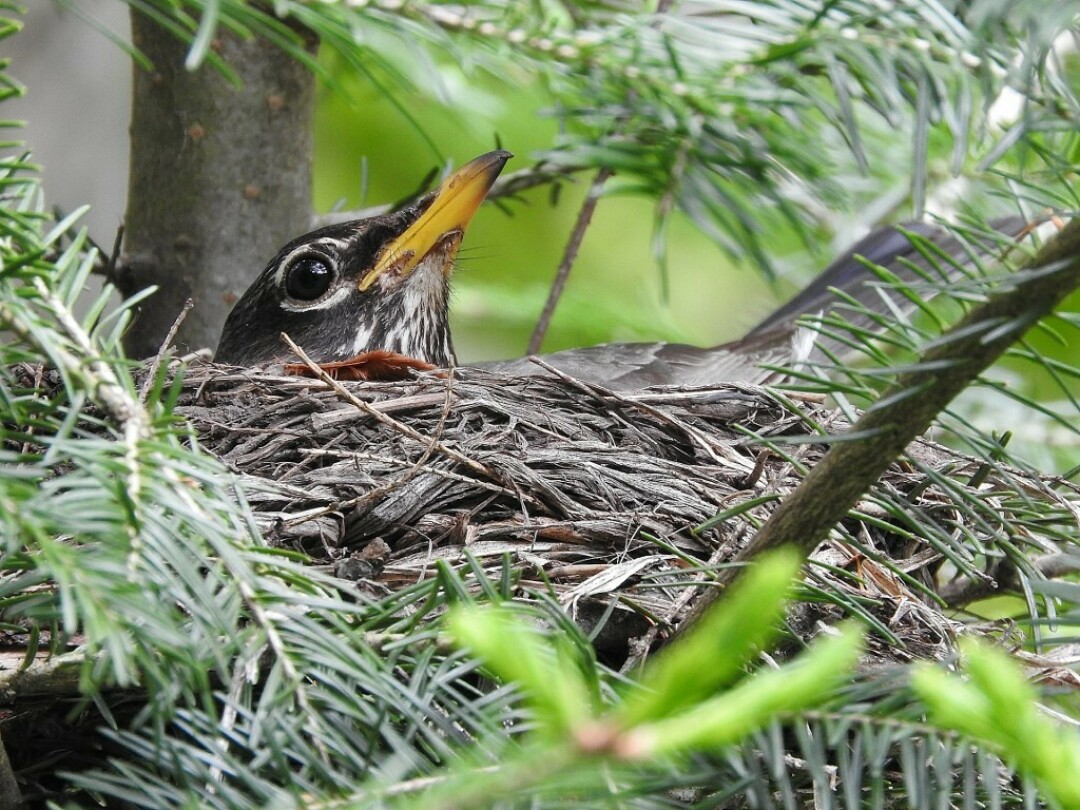 American robins, like most members of the thrush family, make cup-shaped nests that often include mud. Photo by Emily Stone.

The hemlock forest was cool and dim as afternoon faded to evening. I hiked quickly, but with eyes and ears open, hoping to catch a whiff of spring.

A flutter of movement caught my eye. Pausing, then creeping forward to see around a trunk, I was rewarded by a glimpse of the plump brown body and rusty tail of a hermit thrush. Silently, it made a series of short flights into the balsam thicket and vanished.

I smiled at the discovery that this early spring migrator had returned. And then, I listened even more carefully, hoping to hear the bird’s delicate, flute-like song filter through the trees as I have on so many gray-lit walks.

“Whyyyy don’t you come to me, to me?” sings the lovelorn bird as the air begins to shimmer with magic.

“Such soft and solemn and perfect music doesn’t last for more than a few moments,” wrote Mary Oliver.

And from Henry David Thoreau: “The thrush alone declares the immortal wealth and vigor that is in the forest. Here is a bird in whose strain the story is told…Whenever a man hears it he is young, and Nature is in her spring; whenever he hears it, it is a new world and a free country, and the gates of heaven are not shut against him.”

But my wish was not granted. Silence reigned.

The following morning, as the first light of dawn and my consciousness expanded in tandem, the incessant voice of a robin pierced through my closed window.

Cheer up! Cheerily! Cheer UP! CheeriLY! Over and over he shouted a greeting to the Sun, an invitation to the lady robins, and a challenge to his foes.

Since the robin’s hedonistic exuberance left no moment in which to anticipate his next phrase, I rolled over with a grumble. He was no hermit thrush.

It’s hard, sometimes, to remember that these two birds are related.

The thrush family, Turdidae, includes a few obvious members, like the hermit, Swainson’s and wood thrushes. But there are also a few who are not so aptly named – American robins, veerys and bluebirds. Of these, only the American robin is a “true” thrush in the genus Turdus.

Now, in case that made you giggle like a middle schooler – and because you know how much I enjoy teaching about scat in nature – I looked up the etymology of both words. Unfortunately, turdus is simply Latin for “thrush,” while turd seems to have its origins in old words that mean “torn off” and also shares some very old roots with the word scat.

Moving on, I think it’s useful to remember the things that robins and hermit thrushes have in common.
Both birds are prolific singers, and you’re welcome to disagree with me about the hermit thrush’s song being more pleasant. Both birds have plump bodies in shades of brown and orange. They walk about with upright postures, and they often forage on the ground. 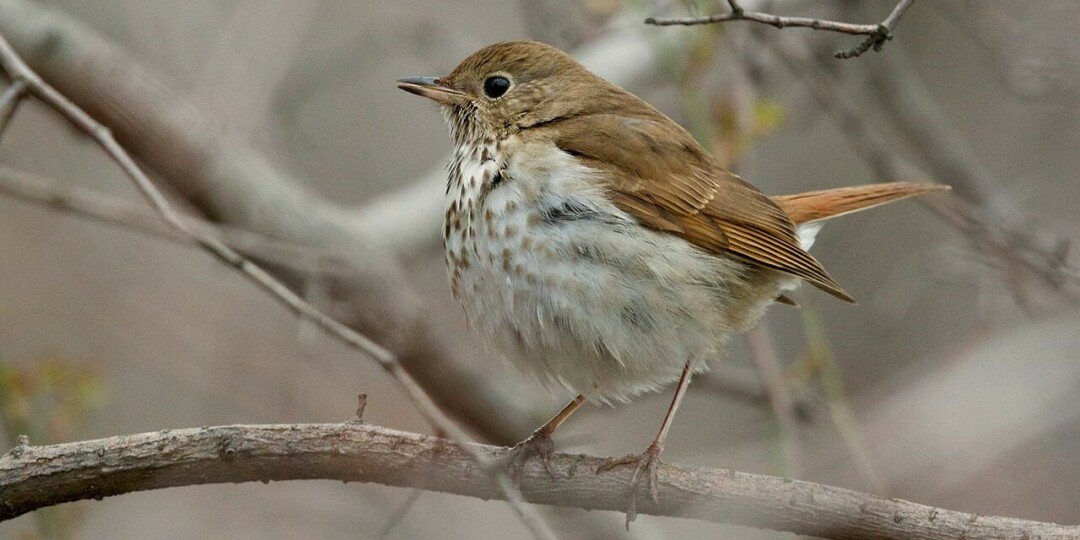 Hermit thrushes are one of the most melodious members of the thrush family. Photo by Matt MacGillivray.

Robins, classically, run across the grass and then stop to search for worms. It may look like they are listening, with their head cocked to the side like we would, but sight seems to be more important. They find worms by spotting the disturbances they make in the soil.

Observations have shown that they focus on earthworms for breakfast – presumably when the moist-skinned invertebrates are most active – and then switch to fruit later in the day. Sometimes they do double duty by selectively eating fruits that are infested with insects. Clever!

While I’ve seen plenty of robins in the wilderness, hermit thrushes are rarely seen on lawns.
Hermit thrushes have their own fascinating foraging techniques for forest glades. They sometimes hunt by “foot quivering,” where they use their feet to shake the grass and scare up insects and other small critters.

One hermit thrush was observed trying to use a 1.5-inch-long salamander as baby food!

Both of these birds, and all the thrushes, build cup-shaped nests that often include mud. Robins build their nest on a horizontal surface. Branches or doorframes seem to work equally well, unless it’s your front door, of course.

Hermit thrushes build their nests on the ground. Bluebirds are the odd duck of the thrush family – they are the only cavity nesters of the group.

The robin woke me up again today. He’ll likely be my alarm clock for the rest of the summer as he rushes to raise up to three broods of chicks.

Hermit thrushes will soon join the chorus, too. Hopefully, as Thoreau predicted, “whenever he [or she] hears it, it is a new world and a free country.”

Emily Stone is Naturalist/Education Director at the Cable Natural History Museum. Her award-winning second book, Natural Connections: Dreaming of an Elfin Skimmer, is now available to purchase at cablemuseum.org/books and at your local independent bookstore, too. For more than 50 years, the Cable Natural History Museum has served to connect you to the Northwoods. The Museum is now open with our exciting Growing Up WILD exhibit. Follow us on Facebook, Instagram, YouTube, and cablemuseum.org to see what we are up to.