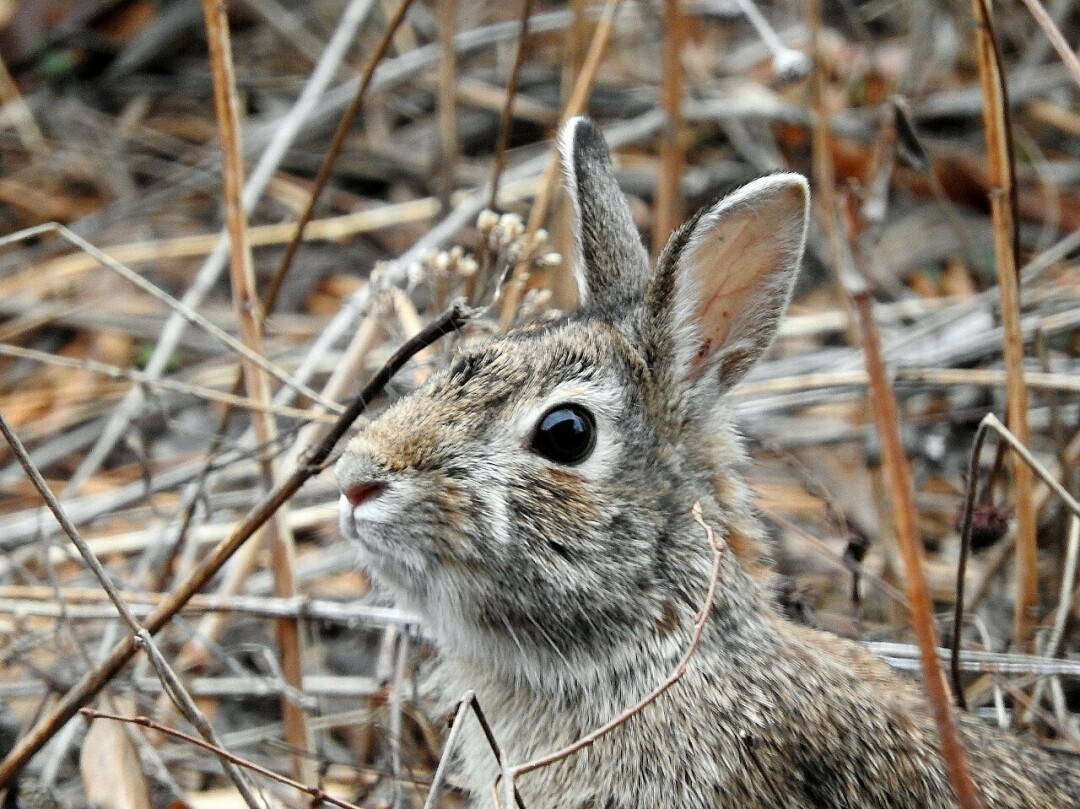 A curious cottontail with ears attuned. Photos by Emily Stone.

My typing grew halting, then paused. I gazed out of my office window, trying to figure out how to begin my next Natural Connections article.

To my surprise, I had more than just mottled green lawn to look at – a fuzzy brown bunny sat nibbling on the blades!

As I watched, their little mouth worked back and forth on the patch of grass, and their ears twitched this way and that, listening to the sides and behind – then abruptly rotated forward with cartoonish focus when a burst of laughter in the office filtered out through the glass.

Was the giggling something for the bunny worry about?

A cottontail can rotate their ears three-quarters of the way around, like little satellite dishes picking up any signals that could mean danger and assessing their location. I could see the anxiety in their quivering muscles.

It’s appropriate for the bunny to be on high alert – almost every predator eats them!

However, birds of prey might be their biggest threat. In some places, they are the primary lunch of red-tailed hawks. In other regions, great-horned owls are their main foe.

Big metal predators do a number on the population of bunnies, too – a study in Missouri found that 10 eastern cottontails are killed annually per mile of road, mostly in spring when the ditches green up before the fields. Disease kills another 18 percent.

All told, only 20 percent of adult rabbits survive each year, and the mortality rate of babies is even higher. The average bunny only lives to their 15th birthday – 15 months, that is.

It’s lucky then, that cottontail rabbits breed like, well, rabbits.

Rabbits reach reproductive maturity at three or four months of age, which makes their average lifespan seem a little more reasonable. Most females don’t breed until the spring following their own birth, but a few get started popping them out in their first summer.

Since cottontails can be found all the way from southern Canada to northern Colombia, their breeding season varies quite a bit in length – along with the number of litters a female can have in a year.

In Wisconsin, three litters is about max, but in some areas they can manage up to seven litters of up to 12 kits each!

One literature review published by the Colorado Division of Game, Fish, and Parks found that some females produced up to 35 kits per year.

How is that even possible!?

First, gestation takes less than a month. Second, the doe (female rabbit) mates again soon after she gives birth. Just as her first litter is weaned at about 22 days old, her second litter is on its way.
I’m exhausted even typing that.

Of course, cottontails don’t do very much active mothering. Nests are only 5 inches deep and consist of a scratched-out depression in a clump of grass or under a bush.

While the babies are born blind and with hardly any hair, the female does not stay in the nest with them; instead she returns just once or twice a day to feed them.

In contrast, my friend’s 3-month-old baby is eating every 2 hours.

The adaptation that makes this extended feeding schedule possible is that cottontail milk is about 14 percent protein and 35 percent fat. Rich milk is common among animals who leave their young alone for long periods.

The rabbit must have darted off while I was Googling them, but soon another movement caught my eye.
The brown bunny had reappeared among the dry leaves and stems of our pollinator gardens, which had been left alone through the winter to protect overwintering insects.

I grabbed my camera and zoomed in, captivated by a shiny black eye, those alert ears, and an impressively active nose. Twitching their nose up to 120 times per minute exposes a rabbit’s 100 million scent receptors to the smells of danger.

Plus, they look adorable doing it.

Seven-hundred words later, just look at how productive staring out the window can be!

Emily Stone is the Naturalist/Education Director at the Cable Natural History Museum. Her award-winning second book, Natural Connections: Dreaming of an Elfin Skimmer, is now available to purchase at cablemuseum.org/books and at your local independent bookstore, too. For more than 50 years, the Cable Natural History Museum has served to connect you to the Northwoods. Follow us on Facebook, Instagram, YouTube, and cablemuseum.org to see what we are up to.