WILD vs. STL in the first round! 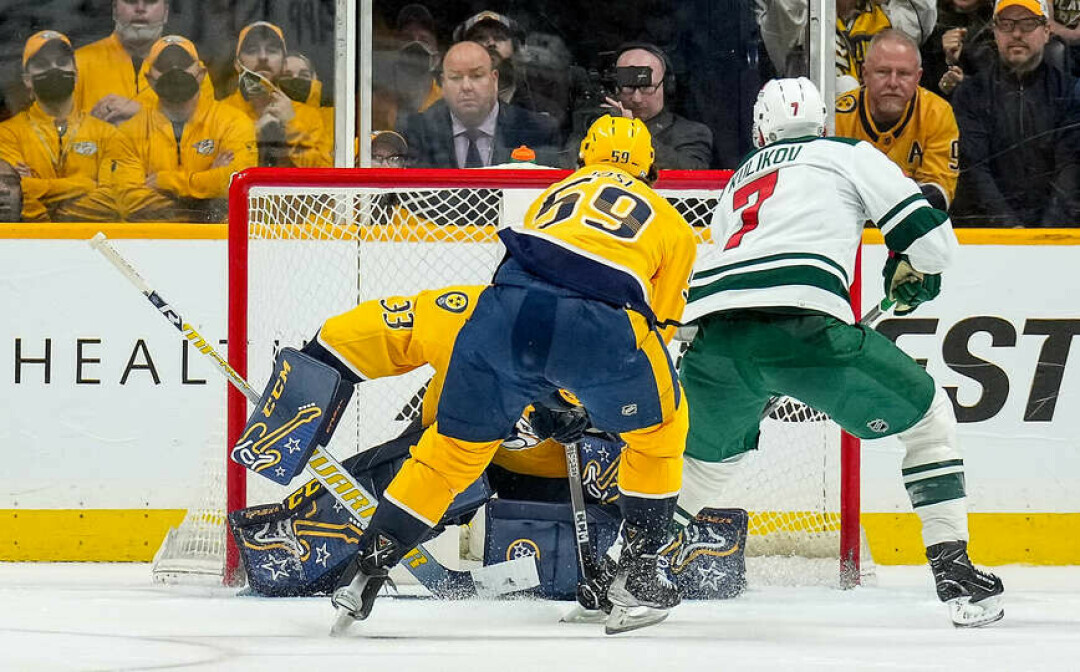 Dmitry Kulikov scores the GWG in OT in NSH.

GRAND LAKE – I am not sure how many hockey fans in the State of Hockey know this but Minnesota and St. Louis hockey teams from a variety of leagues have met up in their league’s postseason tournaments since as far back as the ’30s. The most prominent of these from the National Hockey League has featured the state’s former team, the NorthStars and its current team the WILD.

The St. Louis Blues have provided opposition to one or the other going back to the Stanley Cup tournament of 1968.

In the postseason the Blues held an all-time playoff edge against the NorthStars at four series to five. The WILD and Blues have met only twice and it is even up at a series each.

The most recent tournament meeting between the two occurred back in the 2017 playoff with the Blues advancing in a four games to one victory.

There is not enough playoff history between the two to draw any meaningful information from and besides that these teams change from season to season. There is quite a bit to glean from recent regular-season meetings though and much of it does not favor the WILD.

That does not worry me as it may have earlier in the year. This club has gotten past its late-winter malaise and has been one of the top five teams in the league since mid-March. They have not lost a game in regulation during this stretch. (18-0-4) After being dominated by the Blues in the Winter Classic the clubs have met twice and went to overtime to settle both games.

Even considering the Blues took both games I saw enough grit in the WILDs game to know that they can compete against them and win games.

This series will not be for the weak-hearted and it must be noted that home ice has yet to be decided.

Both teams are tied at 109 points. The Blues have two games remaining. They will play at COL and then at home versus the VGK.

The Avs are suddenly in the midst of a four-game losing streak and Vegas is playing as I write and will have three games left after tonight. However, they are on the outside looking in as far as the playoffs go and I do not believe they will get in this season. I am leaning toward the Blues getting four points here.

The WILD have three games left and will be at home in St. Paul for all of them. They have ARI, CGY and the Avs. Can the WILD get five of six points out of these final regular-season games?

Nevertheless, based on how the WILD performs at home let us stick with the home ice. It could prove to be crucial. I would be surprised if it were not a factor.

I can allow that some of the WILD data is skewed here due to earlier season play when the club was not on its game. However, the Blues also had a stretch of challenging play before the WILD had theirs and they still established superior stats.

What happens in this series? I am not going to issue a pick for it. You can figure out who I will be pulling for though. I will state that the WILD can score goals when needed and they can defend too. They can negate their special team concerns by minimizing them. If you take the fourth-most penalty minutes in the league and expose your PK that much, the odds will not be in your favor. They also may have the best goalie duo in the show right now. Or at least the top three. That is not a stretch to say so.

The team should be at full strength for the tourney. Captain Jared Spurgeon left tonight’s contest with NSH with a UBI. The seriousness of the injury is not yet known. The WILD’s other injured players will be ready for the playoffs. Foligno (Covid), Dumba (UBI), Greenway (UBI) and Zuccarello (LBI) are slated to be ready. Matt Boldy and Jon Merrill have already returned from their earlier injury situations.

Even though I am not making an official pick I will share some info I viewed that was quite favorable to the WILD.

I came across a chart/graph that showed 18 different teams and their chances of getting into the tourney. That is based on how many teams are in already or still have a chance to be. It is configured in “rings” with each one representing a different level. It begins with a percentage of chance to get in, win the first round, second round, etc.

We already know the club is in. The chart gives the WILD a 69.4% chance of winning the first round. It gives the Blues a 30.6% chance in the opening round.

I do not know what will happen, but I know what I want to happen. This edition of the Minnesota WILD deserves to win a round or two in this tourney. So does their fan base deserve a chance at some unabandoned joy with some wins. The State of Hockey is long overdue. PEACE

FOR THE WEEK past the team went 4-0 including an indescribable OT win in NSH this evening! They beat MON 2-0, then won versus VAN 6-3 and against SEA by a like score before tonight’s game with the Predators. If you did not see the tilt, get online and watch the game-winning play. I yelled so loud that half of the dogs in my neighborhood started barking! It was one of the most exciting plays of the year!

Either way, I will be pacing the floor starting Saturday right up to the moment the Wild’s series starts.
Let’s play HOCKEY! OVER & OUT!