Getting to know Margaret 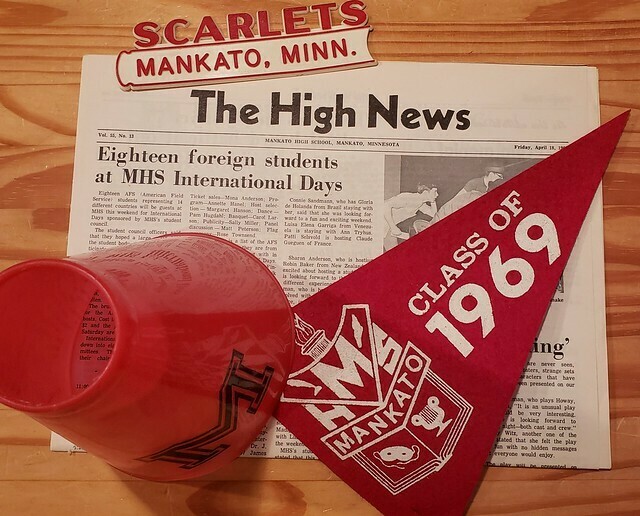 Friday I sang at the funeral of a young man my son’s age. I had been his adult partner when he was commissioned at my church 30 years ago. I was grateful to be behind the mourners so they could not see the hymnal trembling in my hands.

His parents were present, in violation of every parent’s wish that it be the other-way around.

Margaret’s time, on the other hand had come. We graduated from high school together. Her death took place some months ago but was only announced to our class after her Mother, aged 90, passed a few weeks ago.

I’d wondered what happened to Margaret for the last 50 years. She was one of our number who never returned for reunions. For me high school was a little like Dorothy walking into Oz after dreary years spent in Dust Bowl Kansas. Reunions brought me fond memories. It was not so for Margaret.

I met her on the debate team. I joined to make sure I never had another panic attack. For Margaret it could only have been for brain exercise. She probably had the highest IQ in my very brainy class.

Our debate coach was a horse’s ass. Rocky liked to ogle girls and ridicule students. He once showed us a list ranking the IQs of the students in our class of 1969. It should have been off limits.

As he perused it he casually asked why the kid with the second highest IQ, Gary Wilaby, wasn’t in debate.

That caught my attention. Wilaby once passed his straight F report card around our homeroom while he smirked.

Rocky’s revelation suggested that the top IQ was in our debate class. I never doubted that it was Margaret. A memory shared with my classmates at Margaret’s passing sealed my conviction.

One fall a teacher asked her students how many books they had read during the summer. Margaret had read 65. That, and Margaret’s having no time for stupid people, including our debate coach, may explain why a lot of kids didn’t like Margaret.

But even Margaret could feel insecure. When I told her how smart she was she shrugged and told me she had a cousin who was a Rhodes Scholar, as though she was leftovers.

On one occasion I heard girls tut-tutting about Margaret’s having been too involved with an older boy.

When I told Margaret she explained that she had gotten into bed with him but assured me that nothing happened. I was inclined to believe her then and still am.

Even now I am impressed that she spoke of the rumor so nonchalantly when it was additional proof of her classmate’s disapproval.

That disrespect came out in spades during the spring weekend dedicated to bringing foreign students to Mankato. Twenty families signed up to host a student for International Week’s weekend. Despite my having hosted an Ethiopian student the previous school year, I wasn’t part of the International Club and had not planned to participate.

Then the worldly French exchange student, Pierre Von Gerdange, crashed the party. Being from the City of Lights, Pierre was tired of his tiny host community and looked for any excuse to leave it. When Mankato did not invite him to its gala, he invited himself to Mankato. When he showed up unbidden our sponsors needed someone to host the French upstart and thought of the Welty’s.

Pierre was frank and outspoken. He told me about his sexual conquests and his bedding of five American girls. He was three ahead of where I am today. Telling me that one of his conquests had been a bloody mess did little to encourage me.

After we returned to my home from Saturday evening’s festivities Pierre asked me to explain something very perplexing. What promised to be his sixth conquest had been interrupted. He had slipped out of a party with a girl to take a stroll. They found a car, got in and started making out.

Before too long their car was surrounded by dozens of kids who began serenading them with “Getting to know you” from the musical The King and I.

After the weekend I learned the girl had been Margaret. Our school’s best and brightest thought it had been hilarious to rain on Margaret’s parade. I was a little sickened at her public humiliation.

After college it was 50 years of radio silence until her obituary. I learned that she had been an aircraft engineer in my home state of Kansas. I was gratified to read that her coworkers thought highly of her wit and helpful, disposition. I was shocked to see recent photos of Margaret wearing smiles of delight. They were unlike any I had ever seen her put on as a Mankato Scarlet.