Mavis Staples made me cry – again 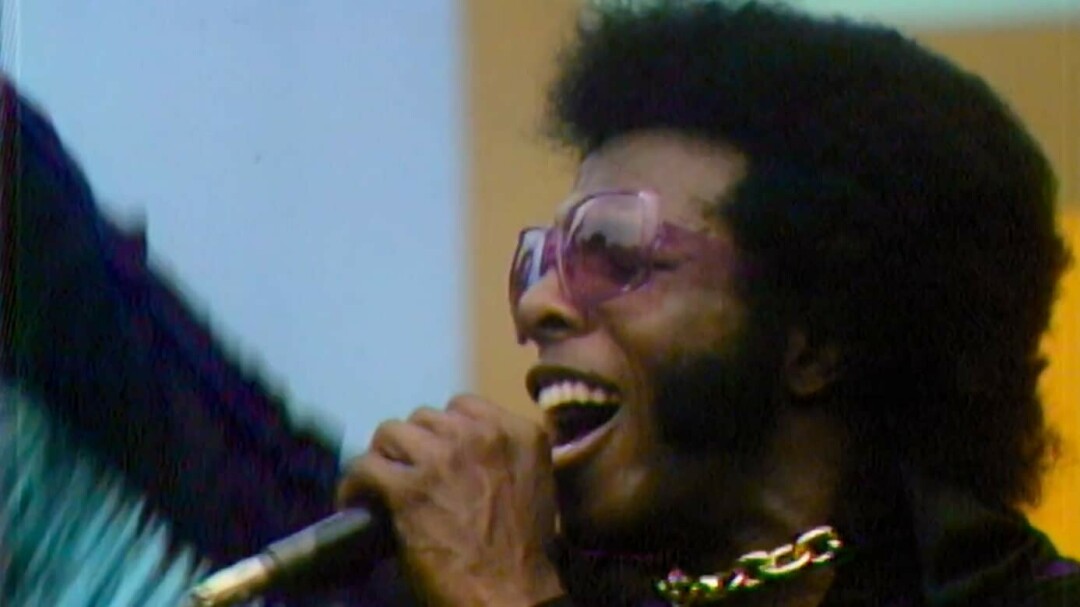 Sly Stone wants to take everyone higher at the Harlem Cultural Festival the summer of 1969.

I used that headline once before in a review of a 2019 show Mavis Staples did in Door County (you can find it here, if you don’t believe me: doorcountypulse.com/mavis-staples-made-me-cry.

I hope you don’t think it awful of me to use it again, but it is true. In fact, Mavis is just one of many performers that made me shed tears or laugh or get up and dance while watching the amazing documentary Summer of Soul (or, When the Revolution Could Not Be Televised), about a long-forgotten six-week free concert series in a Harlem park that featured the Staples Singers, Mahalia Jackson, Sly & the Family Stone, Hugh Masekala, Nina Simone, Mongo Santamaria, Gladys Knight and the Pips, Abby Lincoln and Max Roach, and many more great artists.

The documentary was made by Ahmir “Questlove” Thompson, and since its debut at the Sundance Festival in January 2021, it won the Best Documentary Feature at the Academy Awards last month and also snapped up the Best Music Film award at the 2021 Grammys.

It’s been on my “to watch” list for some time, and I did not watch it recently because of its recent Oscar win. In fact, I am so disinterested in the Oscars I haven’t watched them since Sacheen Littlefeather stood in for Marlon Brando in 1973 – it was the last time something interesting happened during the ceremony (yes, I finally heard about the bitch slap at this year’s awards – bogus nonsense).

It does not matter to me that Summer of Soul won an Oscar. It should win everything, and then there should be no more awards until we understand the significance of everything.

It’s all so clear in the Summer of Soul.

When The 5th Dimension takes the stage in matching “Dreamsicle” costumes, tears streamed down my face when they broke into what must have been the biggest of their many hits, a beautiful mash-up of two songs from the hit Broadway musical Hair – “Aquarius”/”Let the Sun Shine In,” the Grammy-winning best song of the year in the seminal musical year of 1969.

It’s beautiful to see the quintet singing that song which meant so much to me as a 14-year-old wannabe hippie in what I believed at the time to be the cultural outback (aka, my hometown of Duluth, Minnesota). Music of the time gave me hope, shared ideals to hang on to. It reminded me constantly that there are enough people in the world who think this world has gone crazy, and that it really should be so much easier than this. If only we were not too stupid to understand.

Does it take a mind-altering drug to understand that?

I don’t know. But if pressed, I would have to say, maybe.

A Harlem resident who attended the concerts as a child admits in the documentary that he immediately developed his first crush upon seeing Marilyn McCoo of the 5th Dimension that day. It’s easy to see why, because her radiant beauty, stately presence and extraordinary voice are on full display in Summer of Soul, but for me it was the other woman in the quintet, the more petite, Diana Ross-like Florence LaRue, who captured my teenage imagination back in the day. Summer of Soul reminds me why that was when she dances and unexpectedly belts out a powerful line.

Make no mistake – The 5th Dimension was omnipresent on American television beginning in 1967 with their first big hit (five Grammys), Jimmy Webb’s “Up, Up and Away,” followed the next year by the even bigger hit (gold record), Laura Nyro’s “Stoned Soul Picnic.” And then in ‘69 they went into the stratosphere with “Aquarius/Let the Sun Shine In,” – No. 1 hit of the year.

McCoo and her husband Billy Davis Jr., one of the three male members of the group, are on hand to comment in the documentary. They talk about how important it was for them to play the Harlem Cultural Festival – six summer weekends of free concerts – because their mainstream success had seemed to cut them off from black audiences, some of whom, they said, did not know they were black singers until people saw their faces looking out of a hot air balloon on the cover of their first album Up – Up and Away! They definitely make the connection.

The movie begins with the great Stevie Wonder, and this opening was a particularly WONDERful moment for me. In the 1990s I was in a band, playing percussion (congas, bongos, tambourine, shakers and cowbell), but I always wanted a drum set. I recently moved into my new home, and with no one to distract or harangue me for making a wonderful racket, it was time for the drum set.

I was truly moved seeing Stevie kick ass on drums. He sets up a funky rhythm the band falls in line with for a cover of the Isley Brothers “Do Your Thing.” 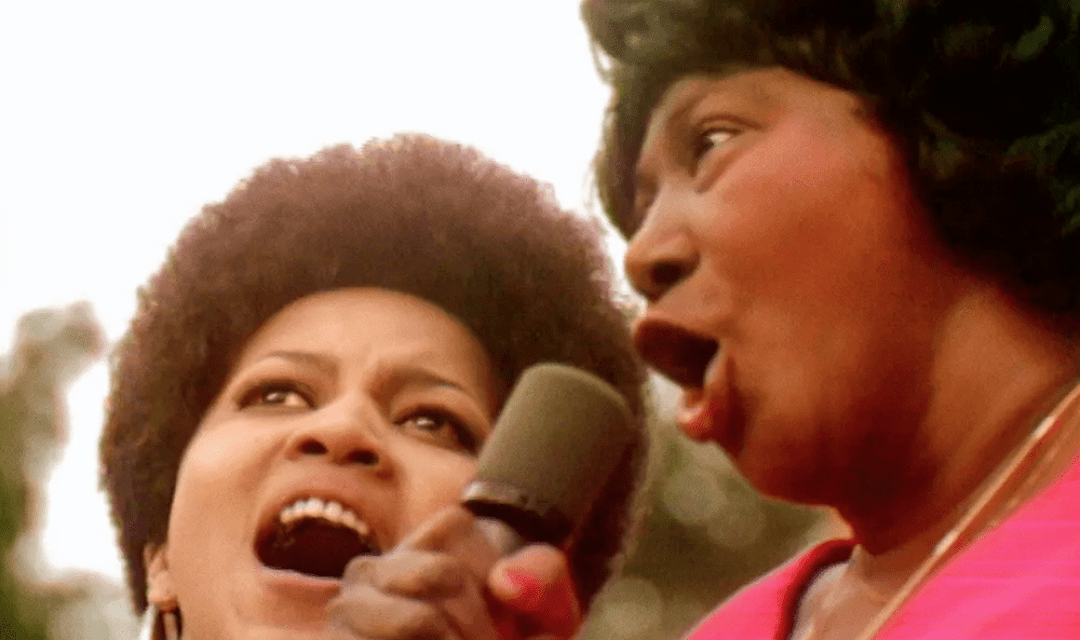 And for this segment alone this movie should have won for best editing (was it even up for that?). In between images of Stevie’s drumming we see clips that remind us of how dark and tumultuous those times really were. It’s a beautiful piece of filmmaking.

One of the many standouts for me was the joyous, masterful performance of “My Girl” by David Ruffin, who had just left The Temptations.

And a true revelation for me is a brief clip of jazz guitarist Sonny Sharrock, who seems to be insanely shredding his guitar for the folks at the Harlem Cultural Festival. I don’t know where Sharrock’s mind was in 1969, but I suggest you find his final album, Ask the Ages from 1991, and you will hear a guitarist who understands Coltrane’s “sheets of sounds.” In the brief 1969 footage, Sharrock looks unhinged. But it’s obvious he was simply an explorer of uncharted territory. He found that territory in Ask the Ages.

There’s an interesting little sidebar within the documentary because the festival took place during weekends the summer of 1969, which included Sunday, July 20, 1969, the day of the Apollo 11 moon landing. While most of America and much of the world is watching the live moon landing coverage, Harlem is at the festival. Reporters – white reporters – ask festival attendees about the moon landing, and they say, sure, that’s great for science and all that, but for what end when there are so many poor people suffering here on earth?

But back to Mavis Staples, and how she made me cry – again. I’ve been a fan ever since I first heard her powerful voice in their 1970 hit “Respect Yourself.” and the haunting style of Pops Staples’ guitar is one of my favorite sounds.

But in 1969, they had yet to break into the mainstream and were known solely as a gospel act, and that’s what they bring here. But Mavis is on hand to talk about how she felt that day, and as she describes it, it happens on the screen. She was moved by the power of the moment. You will feel it.

Mavis returns later at the behest of her idol, Mahalia Jackson, who has told Mavis she’s not feeling well and will need help singing Rev. Martin Luther King’s favorite song, “Precious Lord” (Rev. Jesse Jackson reminds us that the last words Dr. King spoke before his assassination were to Memphis saxophonist Ben Branch, asking him to play the song.)

And, of course, the tears flowed to see one of my all-time favorite bands on stage, Sly and the Family Stone. The messages resonate to this day. I want to take you higher! Amen!