The Harder They Come at 50 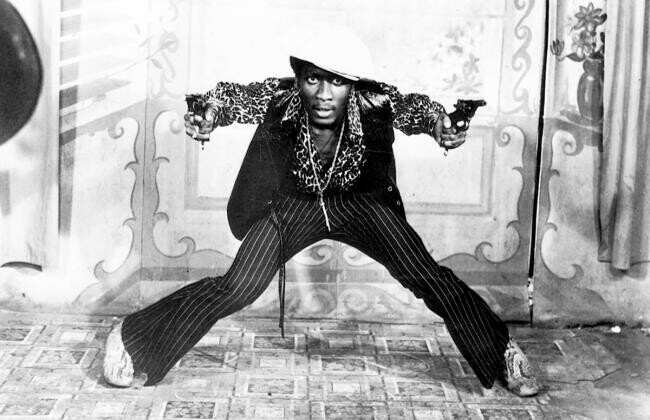 Jimmy Cliff in his gangster mode in The Harder They Come, which turns 50 years old this year.

“Well, they tell me of a pie up in the sky / Waiting for me when I die”
- Opening words of Jimmy Cliff’s song “The Harder They Come”

Besides containing the best movie soundtrack ever, Perry Henzell’s 1972 The Harder They Come is recognized as the first international hit for the Jamaican film industry, about an outlaw musician who did not want to wait until he died to get a slice of the pie.
The Criterion Channel is celebrating the movie’s 50th anniversary with an audio commentary version with the late Henzell (he died in 2006) and star Jimmy Cliff.
That to me was time for double-dipping. First I watched the film on its own – it’s probably a couple of decades since I’d last seen it – and then watched with the commentary.
The biggest surprise for me with the commentary edition was to learn that the director is a white Jamaican. He grew up the son of a wealthy island family and spent his youth in an English boys’ school, so his voice sounds Irish with the Jamaican lilt to it. Yet he makes it clear early that he shares the values of the island’s Rastafarians.

The Harder They Come tells the story of country bumpkin Ivanhoe Martin (Cliff), who, after his grandmother dies, arrives by bus in Kingston to chase his dreams, but immediately upon arrival is ripped off and lost in the slums.
Henzell said the Jamaican Chamber of Commerce was not very happy with his realistic portrayal of Jamaican life, minus the pretty tourism aspect experienced by foreigners.
The movie looks even rawer and more desperate being shot hand-held on 16mm film. Both Henzell and Cliff say there was a good deal of improvisation throughout the making of the movie, and several changes in direction along the way.
Cliff’s character is based on real-life folk hero outlaw Ivanhoe “Rhyging” (Jamaican patois for “raging”) Martin, who was first arrested at the age of 14 and sentenced to a “birching.”
Henzell used the birching episode, after Cliff is arrested for cutting a man who was trying to steal his bike, but he tells us during the replication of that birching in the film that most of it was cut due to its graphic nature.
Martin led police on a six-week chase that established his notoriety, before being shot to death by police at Lime Cay.
Henzell used that frame for Cliff’s character, but also gave him musical ability and aspirations to improve his lot through music.
But, no, those aspirations are crushed at every turn, by an exploitive music producer when he cuts his hit record “The Harder They Come” and is only paid $20 for it, and by a preacher who does not want his daughter to consort with Ivan, causing him to go rogue.
Henzell describes opening night at a theater in Kingston with 1,500 seats.
“People as far as you could see,” he says. “There is no thrill in moviedom like the thrill of seeing yourself on the screen for the first time. Jamaicans had never seen themselves on a screen before.”
He said people went so mad about the movie that you couldn’t hear the dialogue on opening night.
Along the way Henzell says he felt there was “something about Jamaican youth and culture that’s really worth projecting to the world,” even though they are living in crushing poverty.
“I realized at that point, it was a kind of defiance of poverty, that you can be poor and you can be proud,” Henzell says.
Henzell mixed up with the cast with professional actors and Jamaican slum dwellers, and seemed especially pleased with the performances of the non-actors.
All of a sudden Jimmy Cliff pops onto the commentary, independent of Henzell and almost sounding as if added as an afterthought.
They first got together about the movie when Henzell asked Cliff if he could write the soundtrack for a movie. Cliff responds, almost incredulous. “Of course. I can do anything.”
Some time later Cliff was living in England when he got the script from Henzell through Chris Blackwell of Island Music. Growing up in Jamaica watching Westerns, Cliff said he could feel Ivan’s character and had actually wanted to get into acting, so was happy to be asked to play Ivan.
Henzell goes on to explain that there was a history of spaghetti westerns being shown in the slum theaters of the time the movie is documenting (and that was followed by a period when kung fu movies dominated), and we see a showing of the 1966 spaghetti oater Django. It sort of sets the way for Ivan’s future rage against the machine.

There’s a scene where Ivan is set up to fail in making a ganja delivery on a motorcycle. He ends up shooting a cop and crashing the bike.
“I reckon it’s the cheapest crash in history,” Henzell says, explaining that he rode along with a hand-held camera, dropped it, wriggled it around and added some sound effects.
There apparently was some tension between Cliff and Henzell regarding the film’s ending. Cliff wondered why Ivan had to die instead of the evil record producer. Henzell’s answer: “Crime doesn’t pay.”
There’s a beautiful raw moment when Cliff is recording the title song. That’s a live performance. Bing, bam, done!
While it might have been a while since last seeing the film, the soundtrack has been part of the soundtrack of my life these many years, on vinyl, cassette, CD and streaming. It has always been one of my favorite records. Period. Even though two of the songs on the 39:55-minute recording are repeated.

Besides introducing reggae to much of the world for the first time, The Harder They Come soundtrack album contains great music from Cliff, of course, but also Toots & The Maytals (their “Pressure Drop” is a masterpiece), The Melodians, The Slickers, DJ Scotty and Desmond Dekker.
Only the title track by Cliff was specifically written for the movie. The rest were singles by Jamaican groups, the oldest of which was Dekker’s “007,” from five years before the 1972 film.
Last March, the soundtrack for The Harder They Come was added to the prestigious Library of Congress National Recording Registry, making it only the second reggae album to be so recognised. In 2007, Burnin’, the sixth studio album by Bob Marley and The Wailers, was also awarded that distinction.