Update on best and worst 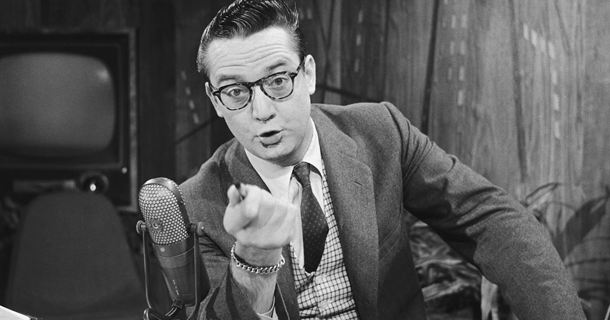 Renaissance man Steve Allen was the original host of NBC’s Tonight Show, which made its debut on Sept. 27, 1954.

I finished the Boom Chicka Pop without encountering one semi-popped kernel. That decides it. I will never buy Old Dutch popcorn again, even if an old Dutchman personally comes to my house and sticks his finger in my dike.
Frozen food: I said Banquet was the best, but I tried the turkey dinner. I put a pat of butter on the peas and mashed potatoes, which made them edible, but the meat resembled turkey in the same way a hubcap resembles a pizza. My dogs were reluctant to eat it. I took a bite, but the texture was cardboard.

I didn’t mention Hormel Compleats, which aren’t frozen. They have a turkey dinner which is decent, and I sometimes have their spaghetti and meatballs, beef dinner or meatloaf. They also have the Dinty Moore Beef Stew, which is OK.
If they say they are ready in one minute, don’t believe it. Vent, cook on high for 1 minute, then stir the potatoes and give it another 30 seconds, at least. There is never enough gravy for me, so I have added a spoonful from a jar of beef gravy, or sometimes a pat of butter. You have to put up with this shit when you aren’t a good cook.

Talk Shows and Network Nitwits: In the 1950s, Steve Allen had a show that was in prime time, and in the 1960s he began hosting the Tonight Show. It was not the talk show it later became. He had regular cast members such as Carl Reiner, Louis Nye and Don Knotts before he became Barney Fife. I remember Knotts playing the part of a man in the street with a bad case of nerves.

Steve was succeeded by Jack Parr, with Hugh Downs as the announcer.  Parr , I believe, originated the talk show format. He could be a little prickly at times, and in one instance, walked off the show, leaving Downs to cover for him. I don’t know what his problem was.
A young Marlin Brando was on the show once with Zsa Zsa Gabor. Zsa Zsa had already been married a couple of times to very rich men, and she complained that everyone thought she was rich.
“Where is my money?”  she asked. “I’m not sitting on it.”
“That’s a point for conjecture,” said Brando.
I didn’t think she would understand that, but she went off the stage in a huff, and I had a newfound respect for Brando.
I saw Johnny Carson doing his stand-up routine, and was happy when he replaced Jack Parr.
A few years later, Joey Bishop tried to compete for ratings, bringing Regis Philben with him. Regis at the time looked, and sometimes acted, like a teenager.
David Letterman hosted the Late Show, which followed Carson, and sometime in this time period, late night shows were hosted by Dick Cavett and Tom Snyder.
Bob Hope, who used to be a big name in Hollywood began to lose his luster, and since he couldn’t get a regular job, he started “entertaining the troops.” The government would fly him into remote bases, where the men were happy just to see a different face. He always brought Hollywood starlets with him to be sure the guys would be happy to see them. He would learn the names of a few of the officers, and tell his stale jokes, adding their names as required.

In the last few years of Carson, when Hope had a special coming up, he would stroll on stage like he owned the place, sit down and recite his scripted joke set while Carson sat with a forced smile on his face, obviously gritting his teeth. Then Hope would get up and leave, having ruined Carson’s show for another night.

I have always had a pretty low opinion of the general level of intelligence in TV network executives. They have often approved shows of mindless drivel which became popular with the masses because mindless drivel fits so well with the mush they have in their heads.
On the other hand, intelligent shows which require time to find its audience went over their heads like a flock of swallows returning to Capistrano.
NBC started to pull out in front of the pack in sheer nincompoopery in the 1990s. Dick Ebersol, the network executive responsible for firing Norm McDonald, the funniest comedian on SNL because he didn’t think Norm was funny, took over the reins at SNL – a masterstroke by network executive standards – putting a man with no sense of humor in charge of a comedy show.

He practically drove the show into the ground before Lorne Michaels came back and rescued it. Of course, the fact that Norm was making a lot of jokes about O. J. Simpson, Dick’s golfing partner had nothing to do with his firing.
After Johnny Carson retired, a proper mess was made with Jay Leno and David Letterman. As if that wasn’t enough, a few years down the line, they decided that Leno, who still had the highest ratings on late night TV, was ready to retire long before he actually was.
They had to involve Conan O’Brien in that mess as well. And, to think, Conan had brought the Masturbating Bear to late-night television.
Meanwhile, over at Comedy Central, Jon Stewart had a popular show called the Daily Show. He had comedians such as Steve Carell, Stephen Colbert, Ed Helms and Samantha Bee, all of whom became popular in their own right.
Trevor Noah is a black comedian from South Africa – a place where apartheid was the law for the first part of his life. When Stewart left the show, he handed it off to him with the advice to make it his own show. Clearly, Noah had many serious issues he wanted to discuss.
I watched the first few shows, decided I didn’t want to watch a serious show on Comedy Central, and quit watching. I understand the issues, and am sympathetic, but I get plenty of that on the news.
After they got their talk shows, I liked Jimmy Fallon less, and Jimmy Kimmel more.
I liked Jimmy Fallon on SNL. He was the perfect song and dance man. I didn’t think he was a good choice for the Tonight Show, and I still don’t. He proved to be a shallow person, just wanting to entertain rather than enlighten.
I didn’t like Jimmy Kimmel on the Man Show; I didn’t think he was funny in the least. I appreciate his humor now, except for one thing: Jimmy Kimmel thinks it’s hilarious to make kids cry.
If I was one of those parents who are so eager to see their kids on TV that they will tell them they ate all their Halloween candy just to make them cry, I would be ashamed. Making a kid cry to laugh at them is cruelty, not humor.