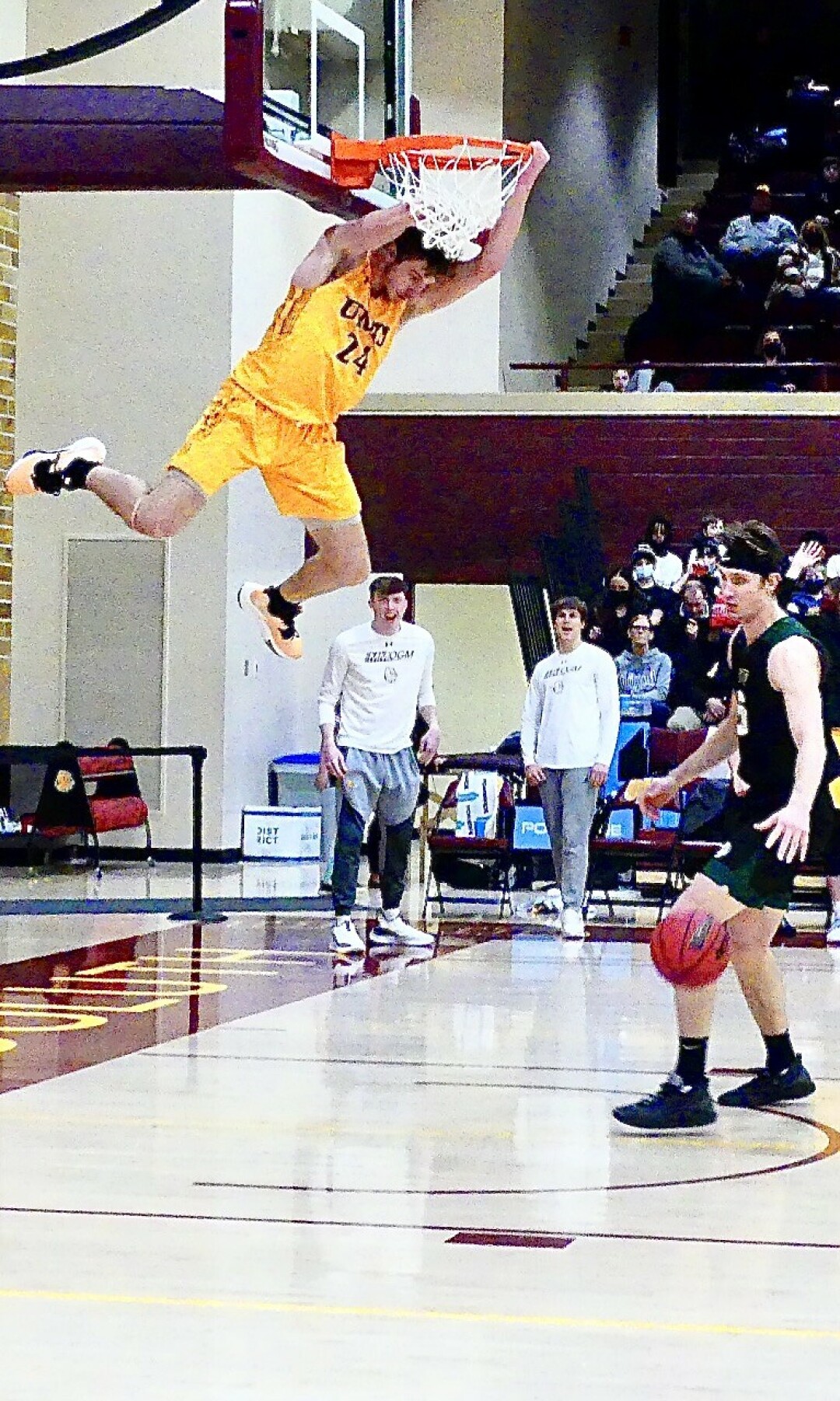 Did you miss the big day? I’m talking about Tuesday of this week, which was Feb. 22, 2022. That’s 2/22/22 for those not counting.
Neat date, I’d say. But if you missed it, you can wait for the next time a similar date appears, which will be 400-some years from now.
That also was the date of the Section 7A and 7AA boys hockey quarterfinals, except that a foot or two of ferociously blowing snow postponed all of them for at least a day.
That starts to crowd things, because the semifinals are Friday or Saturday, for A or AA, as the teams all move to AMSOIL Arena, where the A final – with Hermantown’s No. 1 Hawks a formidable favorite – will be next Wednesday and the AA final next Thursday.
It’s not as though we needed more complexities. Last weekend, for example, both the UMD men’s and women’s basketball teams won their Northern Sun conference titles with a pair of victories each.
I thought that would be good, because they go off to Sioux Falls for the semifinals and championship, earning an automatic NCAA Division 2 berth, so it would be nice to see them both one more time in the first round of playoffs.
But wait! As conference champs, both of them get byes, instead of a home game. So we won’t see them again.
In Division 1 hockey, the complexities are the craziest. UMD swept two tough games from St. Cloud State last weekend, to finish with an 18-6-3 WCHA record – good enough, amazingly, to overtake a suddenly faltering Wisconsin outfit (18-6-3) for third place behind Minnesota and Ohio State.
But hold the celebration.
The WCHA decided, because of pandemic uncertainties, to accommodate possible cancellations by deciding the standings by percentage of points, so UMD’s 19-8-1 was good for 58 points to Wisconsin’s 57 points, but based on percentage of points, Wisconsin stands at .704 and UMD at .690. So the Bulldogs might be third in your hearts, but they’re still fourth in the WCHA, and will take on fifth-place Minnesota State Mankato (10-17-1) in the best-of-three quarterfinals.

Maybe that’s deserved, in the big picture. UMD blanked St. Cloud State 3-0 last Friday, getting goals from Gabbie Hughes, set up by Elizabeth Giguere at 5:01 of the first, and clinging to that 1-0 lead until Naomi Rogge scored at 13:16 of the third, then Katie Davis hit an empty net for the 3-0 victory.

Goaltender Emma Soderberg was back from tending goal for Sweden in the Winter Olympics, but she was held out while Jojo Chobak stopped all 14 shots for the shutout, as the Bulldogs outshot the Huskies 47-14.
Saturday afternoon was a different story, however, as UMD needed a spectacular finish to escape with a 4-3 victory – when UMD welcomed Soderberg back by needing to pull her to turn a 3-2 deficit into victory with two goals in the final 50 seconds.
After Huskies goaltender Emma Pelusny held off an intense flurry of UMD shots, the Bulldogs got the tying goal from Clara Van Wieren with 55 seconds remaining.
The Bulldogs kept swarming, and in an amazing twist of drama, McKenzie Hewett raced in deep on the right, and wound up reaching out from beyond the goal line to swat the puck in with 10 seconds left for the 4-3 triumph.
The celebration erupted but then was subdued by a five-minute review of the goal.
I looked hard as they played the video replay on the big screen, focused to see if someone was in the crease or interfering with Pelusny, but saw nothing. What I hadn’t noticed was that while “racing” up the right, Hewett appeared to be almost a foot offside on the rush before she got the puck and became the hero.

I had to be told that the big-screen video did a stop action, clearly showing she was in the zone before the puck.
There was no doubt the officials would disallow the goal and the teams would head into overtime 3-3. Turns out, there was some doubt. While seeing the same evidence that the fans saw on video — and Huskies coach Steve Macdonald saw from his station on the bench side of the blue line — the officials came out and declared that the goal would stand!

“We got a good look at it, and we thought it was offside,” said Macdonald, who might be the best-behaved coach in the WCHA, if not the world, for having perhaps the biggest victory in Huskies history snatched away and extinguished by an offside goal.
“We can claim it was offside and all, but we made a mistake that cost us the tying goal, so we can’t complain. We’ll have to move on and learn from this.”
The Huskies led 1-0 on a goal by Courtney Hall at 15:11 of the first, but Anna Klein’s 18th goal of the season tied it, and UMD gained a 2-1 lead when Rogge scored her 15th on a power play – two goals by seniors on Senior Day.
This time the Huskies tied it when Olivia Civar scored at 2:59, just 52 seconds after Rogge’s goal. It was still 2-2 when the Huskies swiped the puck and came in 3-on-1. Emma Gentry carried up the right and sent a perfect feed across the slot lot Taylor Lind, who put the Huskies ahead 3-2 at 7:27.
Giguere, who transferred to UMD from Clarkson for a fifth year, got her third assist and fourth of the weekend when she fed Van Wieren’s one-time redirect for the tying goal.
Soderberg’s return from Beijing was solid, with 25 saves, while the Dogs outshot St. Cloud State 36-25. The Huskies got Klara Hymlarova back from the Czech Republic’s Olympic team as well.
Meanwhile, the men followed both women’s games in the pressure-packed series against North Dakota, with returning goalies a big part of that series, too.
In the 4-3 opener, Ryan Fanti tended goal, but after Blake Biondi had a surprising amount of room to tee up the 1-1 equalizer in the first period, the Fighting Hawks moved ahead 3-1 on power-play goals early in the second, by Luke Bast, and in the final minute of the session by Cooper Moore – first goal of the season for both.

Midway through the third period, Darian Gotz, playing a much more prominent role with Wyatt Kaiser out with an injury, sent a hard, long pass more than 100 feet from his end to the far blue line.
Freshman center Dominic James, helping on the penalty-kill, lunged to get his stick blade on the bullet pass at the far blue line, then pounced on the puck and sailed in to score on the breakaway to cut the deficit to 3-2.
For the first time since the first period, the surprisingly sparse crowd had reason to roar. But Ethan Frisch scored the  third Hawk power-play goal of the game, making it 4-2, and Kobe Roth’s 10th goal of the season brought the Bulldogs up to a 4-3 deficit with 3:56 remaining, but the Hawks held off the attempts at the equalizer. 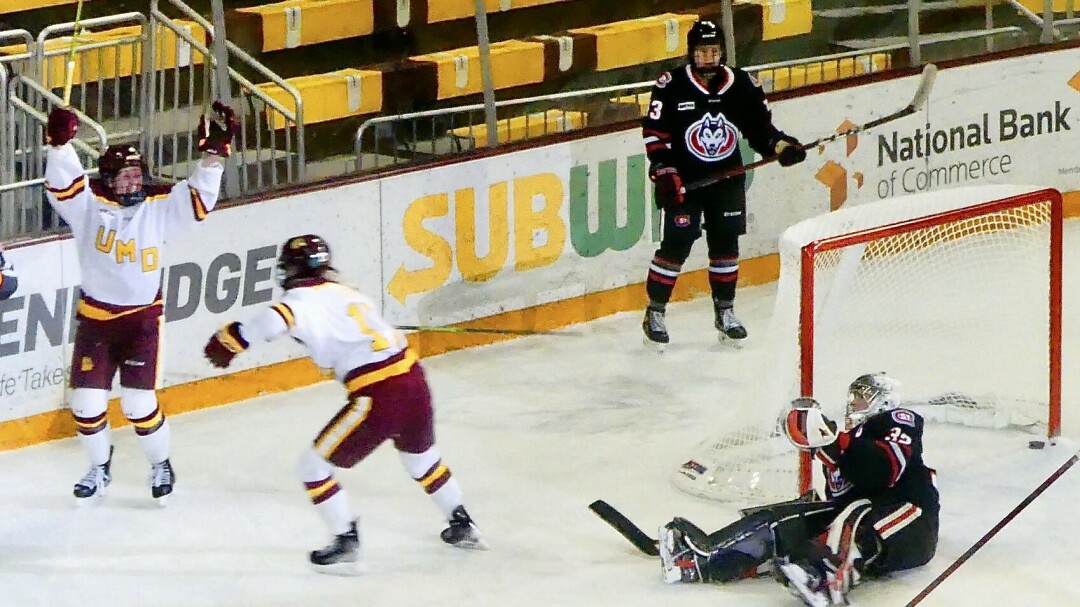 UMD's McKenzie Hewitt celebrated scoring the 4-3 game-winning goal with 10 seconds remaining against St. Cloud State, which withstood video replay that appeared to show she was offside on the play.

The defensive coverage was so close-checking in that game that there wasn’t room to make pretty plays, or any plays, and there wasn’t even much bodychecking because you need some room to initiate bodychecks, too.
The Bulldogs played a much more inspired game Saturday, which also saw the first start for goaltender Zach Stejskal after making only a relief appearance last week, following several months of treatment for testicular cancer, discovered last October.
Luke Mylymok, a sophomore who had been out for all but two games with an early-season injury, started on the fourth line and scored with a one-timer from the right circle for a 1-0 UMD lead midway through the first period in the second game.
But a mishandled exchange in their own end cost the Bulldogs when the loose puck slithered toward the crease just as Carson Albrecht arrived to put his first goal of the season past Stejskal.
Derek Montgomery put North Dakota up 2-1 at 3:08 of the second period, and late in the second period UMD blew a chance to catch up when the Bulldogs made what has become an obligatory back pass while generating a power-play rush.
The pass was botched, and Louis Jamernik, trying to kill the penalty, stepped up and had the gift of a breakaway. He didn’t miss, and the shorthanded goal at 17:33 lifted the Fighting Hawks to a 3-1 lead at the second intermission.
The Bulldogs were inspired for a third-period rally by Kobe Roth, who broke in alone on the left side and beat goalie Zach Driscoll at the left pipe at 3:08. But while UMD attacked to the finish, getting 19 shots in the third period, the Fighting Hawks held on, and the Bulldogs went down 3-2.
The setback drops UMD from a shot at NCHC contention to needing to get it back together at Miami this weekend to hold on to fourth place and home-ice for the playoff quarterfinals. While, almost unnoticed, the sweep boosts North Dakota into first place with a 14-6-1 record, ahead of Denver (15-6) as the stretch drive continues.

At Romano Gym last weekend, the UMD women whipped Bemidji State 76-54, shooting a sizzling 31-for-60 from the floor to clinch a bye in the Northern NSIC race.
Then the men put on a similar shooting show, hitting 36-of-71 for 50.7 percent, and throwing a balanced front at the Beavers, who were led by Derek Thompson’s 26 and Travis Bianco’s 17.
The Bulldogs got 20 points each from Drew Blair and Joshua Brown, who clicked for 7 of 10 from the floor and was 4-6 from 3-point range, and 16 from Austin Andrews, but got a dose of offense from Charlie Katona, as well, when he put in 13 of his 19 points in the second half, including a 7-point spree that turned a 50-43 lead into a much safer 62-45.

Surges were the order of the day for UMD, which trailed 8-6 before scoring an eye-popping 19 consecutive points.