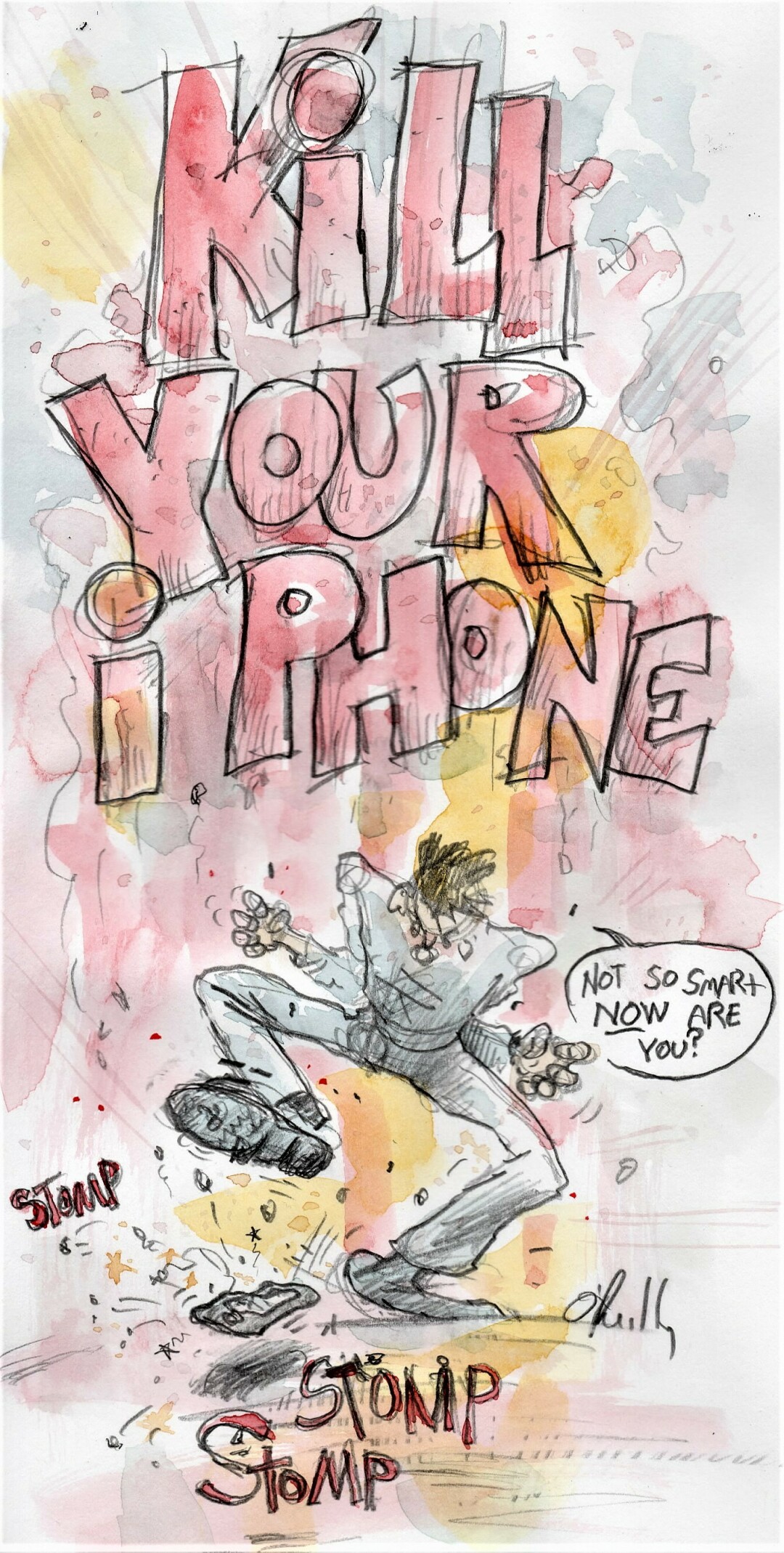 I’m not anti-smartphone, I just choose not to participate in the habit. I’ve never had a smartphone, not because I live under a rock or I’m computer illiterate. I’m not a conspiracy enthusiast wearing a tin foil hat to keep from being tracked by the government.

I just feel that in this climate of unchecked technological “innovation”, where corporations are given a free pass to snoop into our personal lives on the grounds that it makes shopping and connecting with friends easier, that it’s vitally important to be present in the moment, to be self-aware. If you want to carry a miniature computer around in your pocket and surf the web 24/7 it’s OK with me.

But, oh yeah-KILL YOUR iPHONE! It’s bad for you mentally, physically and socially. You are being used by Big Tech and the corporate sector and they are trying to trap us in a world where we can’t function without buying their products.

Don’t get me wrong, I think everyone should have a computer. I grew up in the dawning age of the personal computer and have always appreciated the freedom and flexibility of email and online banking.

At home, we can harness the power of the web and perform amazing technological feats of computing, but once we step out the front door we should talk to our neighbors, appreciate the sunrise and navigate the world around us with an innate sense of direction.

It’s easy to get lost in the communication age, to be sucked into digital media that prey on our weaker instincts.

If you follow the money, it leads to advertisers who are using our phones to grab and hold our attention for as long as possible. The victims of this strategy are wandering the Earth in broad daylight, dead to the world around them as they binge on cat videos, check their news feeds or engage in some soon-to-be-short-lived viral trend on their smartphones.

They’re like hermits, but instead of sitting alone on a mountaintop, they’re alone in a crowd, totally submersed in the digital abyss of that shiny little rectangle. Humans are social creatures who need to share complicated thoughts and carry on face to face conversations, to work out feelings or just spend time with each other.

Another by-product of having the internet in your pocket is the dumbing down of society. With all the answers at hand at every conceivable moment, we’ve quit using our brains for anything more difficult than turning a doorknob.

We don’t memorize phone numbers, we don’t do arithmetic, and we don’t write anything longer than a few sentences. We’ve also acquired an annoying habit of checking facts in real time, second guessing or verifying everything that comes up in conversation.

As soon as you say that Thurgood Marshall was from Baltimore, someone’s digging the phone out of their pocket and verifying the facts on Google.

As useful a tool as internet search engines are, we’ve taken things too far by dismissing the importance of memory and mental exercise. It’s worth considering that misremembering things can lead to original thoughts in a similar way that botching a simple experiment led to the discovery of penicillin.

Some people seem to be immune to the ill affects of smartphones. They can take advantage of the benefits and steer clear of the pitfalls.

In fact, I have good friends that spend a good deal of time on their devices who are interesting, engaging people with robust social lives in the real world. There is a delicate balance and some people have an easier time with it than others.

Some people are more interested than others. That said, we should all have a choice in our level of involvement with the digital world. In other words, some of us should be allowed to opt out.

I recently went to the DECC and got a COVID test. The test requires a smartphone to process your vial of spit and ensure you get your results. This is a great way to remove human interference and improve cost savings.

If you don’t have a smartphone, a tablet is provided for you. The tablet I used crashed several times but in the end it all worked out, thanks to a stranger’s smart phone that I was able to use.

The problem here is that we’ve bought into a system where convenience has been turned into a necessity.

Smartphones used to make things easier, but soon we will need them to perform simple tasks like buying groceries or boarding a plane. It would be one thing if it was a low-cost item like a government issued ID, but the people who benefit here are private corporations.

Why do we need to buy a consumer product to participate in a world that worked just fine for thousands of years without it?

Remember that bumper sticker from the ‘80s that advised us to “kill your television”?

Well, I think it’s time to do the same with iphones. They distract us from life, they make us mentally lazy, and they are always in our hands. Let’s put away these toys and use our computers the way they were meant to be used-tethered to the wall by a cord.

I don’t mean to shame anyone or look down on them, I simply want everyone to take a long, hard look into the eye of their Iphone before they place it lovingly on the floor and stomp it into a thousand tiny pieces.