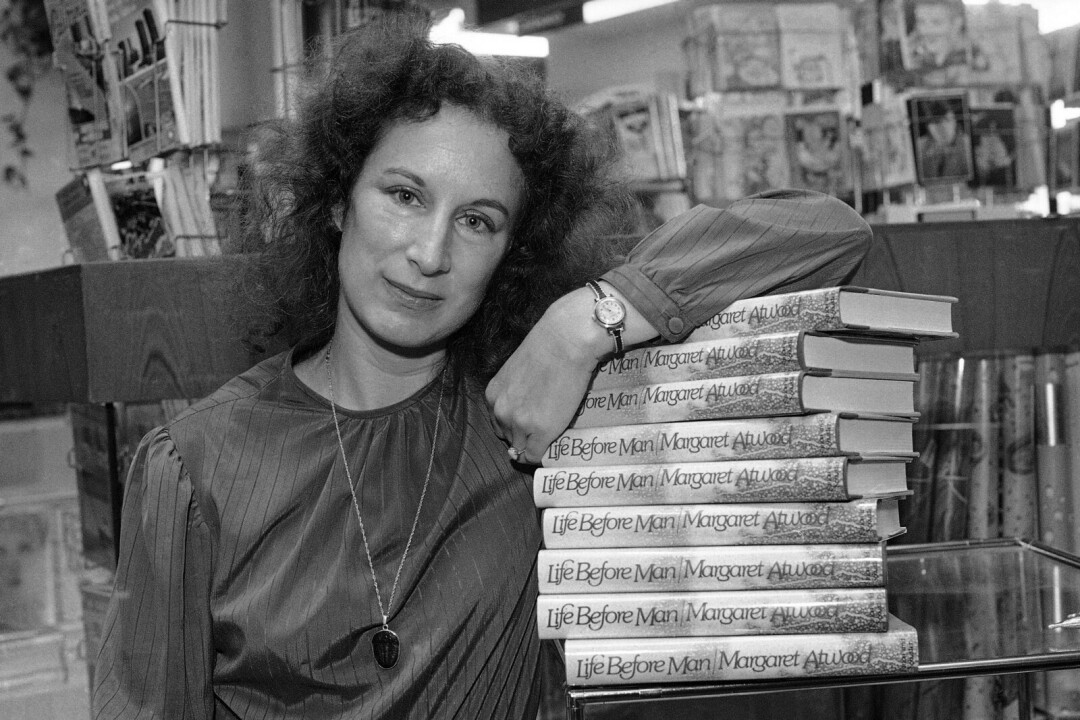 For the past 40 years I’ve felt a pang of guilt for making Margaret Atwood straddle the big hump made in the backseat by the differential gear in Leo Hertzel’s rear-wheel drive Buick Century when he drove us to lunch at Zona Rosa’s in downtown Superior way back in another world called 1982.

OK, I didn’t really make her straddle the hump, but it has always felt that way.

I don’t recall how the seating arrangements were made after Margaret Atwood’s morning writing workshop at the University of Wisconsin-Superior.

Leo was a professor in the English Department there, and I had made friends with him while a student.

This was 1982, and I had graduated the year before with a self-designed major in criticism. About six weeks before graduation, I was hired to work as a cub reporter/photographer/darkroom technician at the Superior Evening Telegram. I also continued to pursue my interest in fiction by entering my short stories into local writing contests, where Leo was often one of the judges, and which I often won. He expressed interest in what I was trying to do as a fiction writer.

We stayed in touch, played tennis a few times (he was far too good for me, even though he was 30 years older).

Leo was widely published himself and very encouraging to this young writer. He was always doing something interesting, including bringing literary names to the small campus that I chose to attend because they allowed me to create my own major and graduate in less than four years with an accelerated schedule of classes (almost killed myself trying to finish the winter quarter where they allowed me to take 25 credits – I think 12 was normal for a quarter, but I was in a hurry to get into the real world and I knew what I wanted to do – write).

Leo told me he was bringing Margaret Atwood for a workshop and reading. In between, he was taking her to lunch and asked if I would like to join them.

So, I dug deeply into her work, reading everything she had done up to that point, which included several volumes of poetry. This was three year’s before she would publish what is her most famous work, The Handmaid’s Tale.

I was mightily impressed by her work, and I noticed something about the progression of books that I thought might help me cut through the normal dross of a writing workshop, where wannabe writers are given a chance to interact with a published and honored writer, and where, unfortunately, questions such as “Where do you get your ideas from?” and “How can I express the universal in my work?” are posed.

Those were actual questions asked by workshop participants of Margaret Atwood. She started the workshop off by asking each of us – I recall a limit of 20 people – to ask her a writing question. She answered even the most inane of them politely, but I could tell she was bored doing so, had answered these same questions many times before in similar circumstances. Just one of the crosses a famous writer must endure.

My plan was to wake things up a bit, so when she came to me, I opened my backpack and pulled each of her books out and piled them on the table. This was 40 years ago, so I do not recall how many books were in that stack (I could look it up, I guess, but that’s not important right now). It seemed like a lot, and I had read them all.

I held up the first several novels, and noted that none of the covers reflected the stories within, until a certain book (was it Life Before Man?), which I noted finally did reflect what she had written.

Her face brightened from the sort of frozen professional look she had maintained up until then, a look that told me this was the first time this particular question had been broached and I had struck paydirt.

She said that book was the first where the publisher consulted her on the cover. It was a real icebreaker moment that should have led to a great conversation later at the Mexican restaurant.

But all I remember from the restaurant is me thinking, “I made Margaret Atwood ride Leo Hertzel’s hump!”

To this day I wonder, was it male privilege that had me ride shotgun in Leo’s Buick, while his wife and daughter rode in the back with Margaret Atwood between them, straddling the hump? Maybe she wanted to sit in the back with the women. Maybe Leo’s wife and daughter preferred having Margaret Atwood between them, straddling the hump, than a greasy little reporter from the local rag. I’m sure they didn’t think that, but I did.

I eventually moved away for a newspaper job on Maui. Leo and I kept in touch through typewritten letters. I still had some hopes of producing relevant fiction, and Leo was always encouraging. But he left us in 2004, and I never got to mention my Margaret Atwood guilt to him.

I wonder what he would have made of it? Being a Catholic, he certainly would have understood the guilt.
And to Margaret Atwood, I apologize for making you straddle the hump. I should have refused the shotgun seat and offered it to you.