Hitchcock and BBC take on Conrad 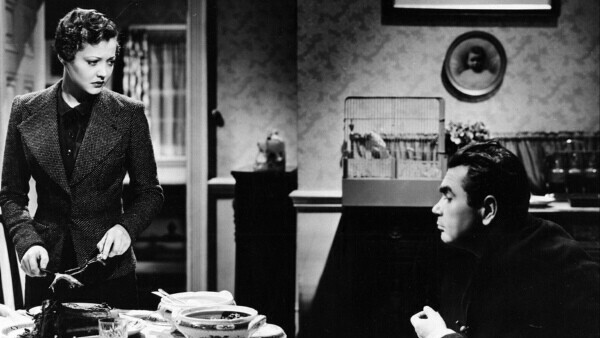 Winnie Verloc (Sylvia Sidney) cuts roast beef with the knife she will soon fatally thrust into the guts of husband Karl Verloc (Oscar Homolka) in Alfred Hitchcock’s 1936 Sabotage, based on Joseph Conrad’s 1907 novel The Secret Agent.

An event that took place in London in February 1894 was so shocking and mysterious that it stuck with novelist Joseph Conrad, becoming the centerpiece of his 1907 novel The Secret Agent: A Simple Tale.

At about 4:45 pm on Feb. 15, 1894, a 26-year-old Frenchman by the name of Martial Bourdin was approaching the Royal Observatory in Greenwich Park when a package he was carrying exploded, taking with it Bourdin’s left hand and leaving a gaping hole in his stomach. He was carried to a nearby seaman’s hospital, where he soon died without saying who he was or what had happened.

To this day it is not known for certain what Bourdin was up to, or if he even knew he was carrying a bomb. However, police soon learned the man’s identity and that he belonged to a group of foreign anarchists who met at a popular London club. They raided the club and arrested everyone inside, but an explanation of what happened was never revealed.

In 1920, Conrad provided an author’s forward to novel that referred to the “Greenwich Bomb Outrage” of 1894 as “a blood-stained inanity of so fatuous a kind that is impossible to fathom its origin by any reasonable or even unreasonable process of thought.”

At home, Verloc lives with his young wife Winnie, her “simple” younger brother Stevie (his excitable behavior suggests autism) and his mother-in-law, “a stout, wheezy woman, with a large brown face.”

The family element of the story becomes very important when Verloc’s new contact at the embassy, Mr. Vladimir, accuses him of being a lazy agent provocateur and insists that he do something to “stimulate the vigilance” of British police to the presence of foreign anarchists in their country.

“What the English need is a good scare,” Vladimir says. “Report back to me with a plan.”

“I mean an act of violence,” Vladimir insists.

I wanted to visit The Secret Agent because a slew of Hitchcock films appeared for the holidays on the Criterion Channel, and in 1936 Hitchcock turned Conrad’s novel into a movie titled Sabotage, just after completing a British espionage thriller titled Secret Agent, but having nothing to do with the Conrad story. 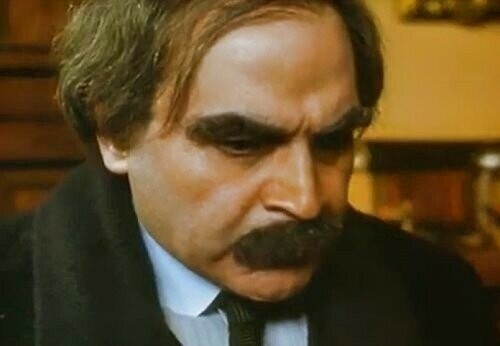 David Suchet stars in the BBC’s 1992 production of Joseph Conrad’s The Secret Agent, which adheres more closely to the story than Hitchcock’s with a much darker ending. The BBC revisited the story in a 2016 production starring Toby Jones as Verloc.

But I also found a BBC production from 1992 starring David Suchet as Verloc. Since I’ve seen Sabotage many times (it’s one of my several favorite Hitchcock films), I began with the BBC production, which, it turns out, follows Conrad’s book more closely than Hitchcock’s version.

We learn more about how Verloc is perceived by his associates in the anarchist community in the BBC production. One of his associates, a man who will later betray Mrs. Veloc, describes Verloc as “an intellectual nonentity.”

“We could close down your grubby little shop at any time. We want Michaelis,” he tells Verloc.

After his tete-a-tete with Verloc, Heat tells his boss, “London anarchists haven’t the spunk to do anything.”

Verloc is called back to the embassy and asked what his plan is.

“I have no plan,” he says, looking less like a secret agent and more like a plumber about to present his bill.

Again Vladimir (Peter Capaldi) accuses Verloc of growing fat on his government’s payments without providing service. And in the absence of Verloc’s initiative, Vladimir has come up with a plan. He first thought of a bomb at the National Gallery, but that, he says, would only produce “screaming from artists and other people of no account….but science. Blow up the Greenwich Observatory and the English will go mad.”

And, he tells Verloc, it must be done before an anti-terrosim conference ends in Milan in one month or else his fellow anarchists will learn that Verloc is a police informant.

Verloc enlists brother-in-law Stevie to deliver the bomb, with disastrous results. In both Conrad and the BBC production, the entire family is eventually wiped out due to Verloc’s machinations.

But Hitchcock allows a much happier ending, with Winnie Verloc (Sylvia Sidney) absolved of her husband’s murder when his body is conveniently destroyed in a bomb fire, and she has a steadfast man who cares for her, the police detective who was undercover while attempting to catch Verloc (played by John Loder, who was not Hitchcock’s first choice – that was Robert Donat who had starred in Hitchcock’s 1935 hit The 39 Steps; Hitchcock claimed Loder was such a lump that he constantly had to rewrite dialogue so Loder could manage it).

Hitchcock starts things off with a dictionary definition of sabotage: “Wilful destruction of buildings or machinery with the object of alarming a group of persons or inspiring public uneasiness.”

Then we see the lights go out in London, thanks to Verloc putting sand in the bearings of a generator. Unlike the BBC’s Verloc, Hitch’s Verloc (the creepy Oscar Homolka) is an active agent provacateur. But his control at the embassy, Mr. Vladimir, is not impressed, and has press clippings that say “London laughs at blackout.” He orders Verloc to carry out an attack that will stop the laughter.

Verloc enlists the aid of the creepy bomb-making Professor (William Dewhurst), who is so paranoid that he never goes outside without hooking himself up to a bomb that will go off if anyone messes with him. He actually helps solve Winnie’s dilemma in the end.

Another major change from the original is that the Stevie in The Secret Agent is no longer a troubled and mentally challenged youth in his late teens but is a seemingly normal young boy who just happens to live in the home of a not-too-bright anarchist. You wonder about that switch, but only until we get to the key set piece where Verloc sends Stevie to deliver the bomb, which the Professor has set to go off at 1:45 pm, or as he says, “The birds will sing at 1:45.”

The scenes are made all the more powerful because we, the audience, know that an innocent child has been sent across London with a time bomb under his arm. Of course, as a child, he is easily distracted by things along the way, including a street parade. Time is ticking away when he hops on a bus to try to make his destination on time, with Hitchcock constantly cutting to clocks on the street as the fatal moment approaches. This is why Hitchcock was known as the master of suspense.

I recall reading that Hitchcock later disavowed the sequence, saying he felt he had been too cruel with the audience.

Pshaw! I bet it shocked the beans out of people at the time, but terrorism does not recognize such bourgeois concerns, and, so, it stands out as a pretty damn powerful statement.