Nothing normal as 2022 gets under way 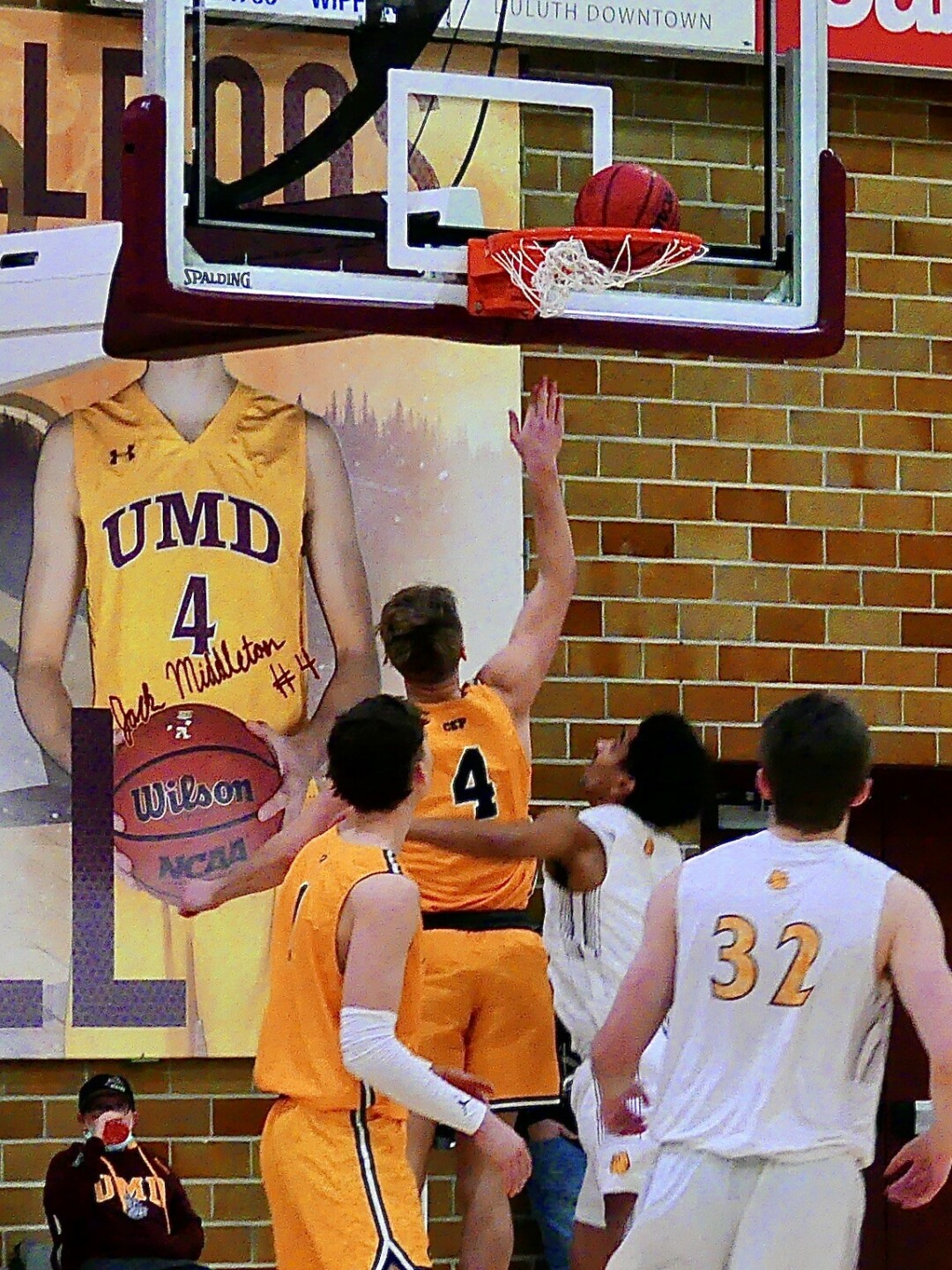 UMD sophomore Jacob Shields lived up to the billing by scoring two (of his three) points in front of his personal portrait in the 106-71 victory. Photo by John Gilbert.

Amid thoughts – hopes? – that we might return to normalcy in 2022, the sports world pretty much turned upside down. Normal would mean we head into the second week of January with something resembling a comfortable determination for the second half of our sports schedules.

We did not count on the Vikings finishing with a victory, and then deciding to fire both general manager Rick Spielman and coach Mike Zimmer. There was good reason for the moves, but it will only be justified if the team makes the right decisions on the replacements.

We can suggest going for a coach who embraces the modern, contemporary views that offense is not a bad thing, and can win ballgames, and from a management standpoint, the whole team is solidly constructed – except for the unyielding stand that Kirk Cousins is the perfect quarterback around whom to build the offense.

We did not count on the Minnesota Wild to tumble out of first place in their NHL division and lose five games in a row – and then to snap out of the slide with the most improbable result.

The Wild, playing without goalie Cam Talbot, defensemen Alex Goligoski, Jonas Brodin and Jared Spurgeon, and forwards Kirill Kaprizov, Joel Eriksson-Ek and Jordan Greenway – all of them top-two-unit skaters. Kaapo Kahkonen has done a remarkable job as backup in goal, and he did the same to limit the Caps to two goals through two periods.

The Wild, meanwhile, played woefully on offense, as might be expected. Trailing 2-0, the Wild drew a delayed penalty, and when the Caps tried to make a European-casual pass back toward their own end, there was considerable shock to everyone in Xcel Center as well as one both benches when the puck kept sliding, all the way into the net, which was emptied after the routine delayed-penalty call.

Mats Zuccarello, who spends most of his shifts making great passes to Kaprizoff, shot one through traffic for the tying goal with 14 seconds left and the Wild goal empty. Overtime was scoreless, and on the shootout, after two rounds, the Wild led 1-0 in shootout goals, and Kevin Fiala, who had been benched for nearly half the game for taking three penalties in succession, was given a reprieve and scored to clinch the shootout victory. And that after being outplayed nearly every shift of the game!

We expected the Gopher hockey team to make a run at Michigan for the Big Ten title, because they are loaded with talent, and have Jack LaFontaine in goal. A fifth-year senior who chose to come back under Covid rules to play again, was named the Richter Award winner last year – although folks who had been deprived of the Big Ten Kool-Ade might have realized MSU-Mankato’s Dryden McKay was the best, based on how he dominated the WCHA. (To stress the point, McKay beat LaFontaine 5-0 in the West Regional final to reach the Frozen Four.)

But LaFontaine was a key to the Gophers this season, and after beating Michigan State both games last weekend, LaFontaine was given an offer he couldn’t refuse – and signed with the Carolina Hurricanes, who are missing two goaltenders because of injuries.

Maybe the Gophers can overcome the loss of their ace goaltender, because they have two or three others on the roster.

We have gotten used to the UMD men’s hockey team taking over the big headlines in Northern Minnesota, and the men’s basketball team, which is Division 2 compared to the high-budget hockey program’s Division 1 status, is a distant supporting operation.

But here we are, in midseason, and the Bulldogs of coach Justin Wieck have put together an incredible performance record – simply winning every D-2 game en route to a 15-0 record, and a secure spot in the national rankings.

They are No. 5 nationally, after last weekend, when their game with MSU-Mankato was scratched because of Mankato’s Covid-19 positive tests, then they came back Saturday to absolutely crush Concordia of St. Paul 106-71. The Bulldogs showed tremendous depth and individual skills to carry off the spectacular scoring night.

The standouts included top-scorer Austin Andrews, who scored 22, to lead six players in double figures. Joshua Brown came off the bench with a dynamic insert of fire, scoring 12, with most of them in a two-minute flurry right after entering the game.

And one of the highlights was Jacob Shields, who also came off the bench at mop-up time.

UMD’s PR staff had a bunch of big-photo displays they can flash up on screens at the end of the court as an added attraction, and a larger-than-life photo of No. 4, Jacob Shields, that he undoubtedly was not aware of as he battled to get free and score from under the basket.

I shot the photo, but it was just a matter of lucky timing, because Shields only made 3 points in the game, and the photo – and big display – shows him scoring 2 of the three.

Both basketball teams are on the road this week, while both hockey teams come home to AMSOIL Arena, the men facing Miami of Ohio and the women taking on Bemidji State.

We fully expected Alabama to cruise to victory over fellow-SEC rival Georgia in the national college championship football game, because Alabama wins all the big games, don’t they?

But Georgia battled the Crimson Tide to a defensive standoff for most of the game, then quarterback Stetson Bennett outplaying Heisman Trophy winner Bryce Young. The game’s first touchdown didn’t occur until 1:20 remained in the third quarter, after James Cook sped through the line and went 67 yards to set up a short touchdown run for a 13-9 Georgia lead.

The Georgia defense stopped Alabama, which had to settle for a field goal to create a 13-12 score, but it seemed that fate was against the Bulldogs when Bennett was trying to avoid a sack, scrambling to his right and attempting to fling the ball out of bounds. He was hit as his hand clearly was coming forward, and the ball fluttered toward the sideline, but was caught before it went out for a Tide recovery.

The replays seemed conclusive, but the ruling stood – it was called a fumble and not an incomplete pass, and Alabama had the ball at the Georgia 16. Alabama punched it in for an 18-13 lead with 10:14 left.

The video closeups on the Georgia bench looked glum, but Bennett came out firing and connected on all three passes for 68 yards, the third being a 40-yard touchdown pass to Adonai Mitchell to put Georgia back ahead 19-18. A 2-point try failed but the Georgia defense didn’t, stifling the Tide offense.

When Mitchell connected with Brock Bowers for a 15-yard TD it gave Georgia a slight cushion with 3:33 left, but the clincher came wen defensive back Kelee Ringo intercepted Young’s pass on the sideline and ran 79 yards for a pick-six touchdown.

Zam Plante is scheduled to pull on his No. 27 Hermantown jersey this weekend, recovering from a dislocated shoulder that has knocked him out for a month.

The Hawks have done very well without him, most recently beating traditional power and large school Class AA state champion Eden Prairie 6-1 at Hermantown on Saturday. That followed Hermantown’s 8-1 victory agains Denfeld, which scored first but then watched Zam Plante tie the game 33 seconds later and set up Wyatt Carlson and George Peterson for goals and a 3-1 lead after one.

Against Eden Prairie, sophomore Dallas Vieau scored both goals in the first period, and wound up with his first high school hat trick for Hermantown, which outshot the defending AA state champions 36-23.

“We don’t have as much talent as our recent teams,” said Eden Prairie coach Lee Smith. “But we’re playing pretty well. We just have to stay out of the penalty box.”

Hermantown, 10-2, plays at St. Cloud Cathedral Friday, then returns home to face Warroad Saturday in a classic match between Class A No. 1 Hermantown and No. 2 Warroad.

So the Vikings will sit out the playoffs, again, this season. But there are going to be some spectacular matches this weekend as NFL playoffs open.

On Saturday, the Las Vegas Raiders are at Cincinnati, and New England hits the road to play at Buffalo; on Sunday, Philadelphia is at Tampa Bay, San Francisco is at Dallas, and Pittsburgh is at Kansas City; and the game of the week is Monday night, with Arizona at the Los Angeles Rams.