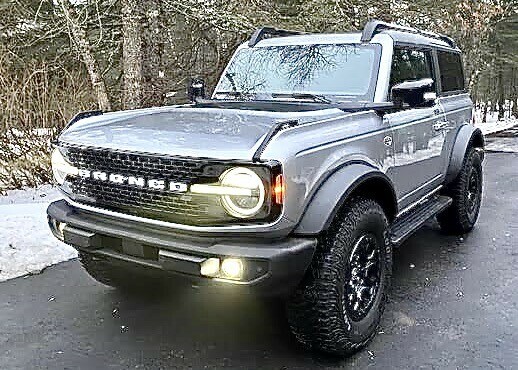 The new Bronco comes in two sizes, with the larger 2-door offering a stick. Photo by John Gilbert.

Sometimes an auto company can baffle us with the manipulation of introductions, and in this case, Ford created more questions than it answered when it brought out the versatile and useful Bronco.

I actually got my mitts on two or three different ones, and enjoyed them all – a tight little 4-door SUV capable of handling all your SUV objectives.

I knew that Ford also was bringing out a larger Bronco, with more interior room and the ability to haul more people and stuff. So about the time I figured out the 4-door Bronco, I got a couple different 2-door models, and they also were also fun to drive and felt sportier.

If you aren’t slightly confused by now, maybe you haven’t been paying close attention.

I eagerly hopped into the most recent Bronco, sizes realizing immediately something was different. It was a 2-door, after all the earlier ones of both were 4-doors. The 4-door is well made and takes care of business efficiently.

But, c’mon – don’t we all harbor secret fantasies about having a 2-door SUV? I know I have.

The first 2-door model I had was, believe it or not, a stick shift!

Ford has equipped some of the Broncos with a 7-speed stick, and that gives you the ability to keep it right where you want it. Fortunately, the second one I got came equipped with the 10-speed automatic, a smooth-shifting unit that is perfectly set up for the equipment at hand.

The Bronco 2-door Advanced 4X4 was the “Black Diamond” model and felt light and quick, and came with a 2.3-liter EcoBoost twin turbocharged 4-cyinder engine.

The stick was remarkably smooth to shift and accelerated out of trouble with ease. If had 275 horsepower and 315 for-pounds of torque.

The hill-start assist is a neat feature, with a stick, because it puts you at ease when you stop on a hill, and the vehicle won’t roll away while you’re stopped.

That’s particularly handy if you’ve gotten a little rusty in your heel-and-toe skills with a stick and a clutch. It also had what Ford calls “full vehicle steel bash plates.”

The 2-door gives you a spacious rear seat, although getting into it requires some agility.

The Black Diamond trim is neat and gives you an optional removable roof. Ford wants the Bronco to tackle the same off-road projects as the Jeep Wrangler, so it starts out by making available doors that pop off, do you can go cavorting around doorless if that suits you.

The Bronco 2-door with the 10-speed automatic was equipped with the Wildtrak package, which means, in my case, a 2.7-liter EcoBoost V6, with lots of power. That lists as 315 horsepower and 410 foot-pounds of torque.

Curiously, the larger engine with the automatic didn’t feel as quick as the four with the stick.

One of the features that attracts folks to the Bronco is the array of gadgets that make it seem like a good deal, such as the cargo area protectors, the black roof rails, and the neat LED headlights that shine as though squinting just a bit.

The smaller Bronco, with the four doors, makes selection a tough choice. I’ve found that modern automatics work so smoothly they can relegate the stick shifts to the discard pile. Unless, that is, if you like stick shifts as much as I do. In that case, the stick makes the 4-cylinder function like old-time off-roaders.

Especially if you take the doors off and let it all hang out, so to speak.