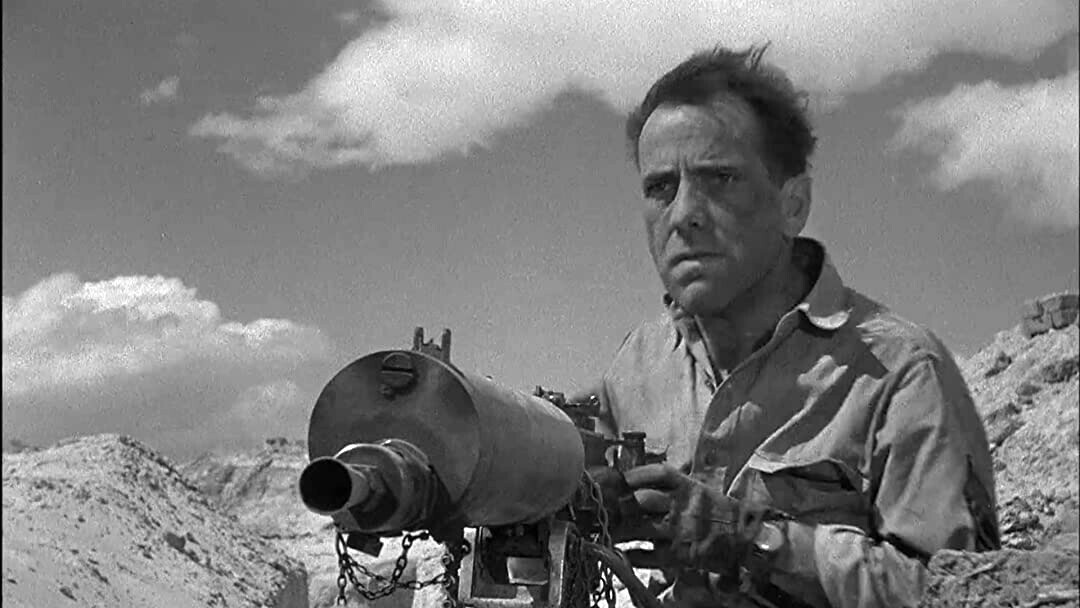 Humphrey Bogart on the attack against Nazis in the desert in Sahara (1943).

Determined to ride my bike throughout the winter, the recent cold spell made me realize what a literal pain it is to be among the 4 percent of the population that has Reynaud’s Syndrome.

Even with battery-heated gloves, three fingers on my left hand turned ice cold and dead white after a 10-mile ride.

When your appendages get that cold, the cold also seeps deep into your soul. I could think of only one way to warm up – a desert movie.

All my favorite desert movies involve World War II, and there are quite a few to choose from, but I don’t take long to choose – I go immediately to Five Graves from Cairo from 1943.

Why? It’s written by the top-notch team Billy Wilder and Charles Brackett, and it is only the second American feature directed by Austrian-native Wilder. Directly after this one, he made one of his several masterpieces – Double Indemnity.

As an added bonus, Five Graves features actor/director Erich von Stroheim as Field Marshal Erwin Rommel. Stroheim had made his mark as a director in the silent era. His magnum opus was the 1934 Greed, the first version of which runs 10 hours. His uncompromising nature and attention to detail led to fights with the studios, which led to his being banned for life from directing.

Thankfully, he turned his attentions to acting and became known as “the man you love to hate.”

But the star of Five Graves to Cairo is Franchot Tone, as a London bank clerk serving as a corporal in Egypt, the sole survivor of a five-man tank crew that got pummeled by Rommel’s Afrika Korps during the fall of Tobruk in June 1942. Tone’s character wanders the desert and reaches an outpost hotel with a bad case of sunstroke.

Oh, yeah, as soon as Tone begins tumbling in the hot sand I feel life tingling back into my previously dead fingers.

When he reaches the hotel, dazed and confused, he passes out, just as Rommel and his entourage arrive to set up temporary headquarters in the hotel. Hiding the passed-out British soldier from the Nazis is hotel owner Akim Tamiroff and maid Anne Baxter.

Baxter’s maid has a brother in a German prison camp, so sets out to seduce Rommel. He has rung for the waiter to bring him breakfast, but Baxter arrives instead.

“I don’t like women in the morning. Go away.” Rommel tells her.

She explains she needs to talk to him.

“Two steps back, please,” Rommel says. “Now what do you wish to say?”

She tells him about her father and brother in German prison camps, and that the brother is wounded, and she would do anything to get him out.

“This is reminiscent of a bad melodrama, but usually a lover, not a brother,” he tells her, and then dismisses her by saying she should write to the camp commandant or the Red Cross, and make sure you do it in triplicate, he tells her. Germany needs the paper.

Rommel/Von Stroheim gets all the best lines that Wilder and Brackett wrote. For example, after sitting down to dinner, he looks at what the waiter has just delivered and says, “Rice pudding in Egypt. One never knows whether it’s raisins or flies. Take this away!”

Rommel then gives a speech on how the Germans have been preparing for war whilst everyone else in the world was going about their business. It is just what Tone’s character needed to hear to launch a plan to halt the seemingly unstoppable Afrika Korps by identifying and eliminating secret supply depots Rommel had arranged several years before the war started.

Tension is created by Tone pretending to be a crippled waiter who died in an air attack just before Tone arrived. He only learns when an advance German unit arrives at the hotel before Rommel that the waiter had been a German spy planted at the hotel. So he has to pretend to be working for the Nazis while gaining information to destroy their supply depots. 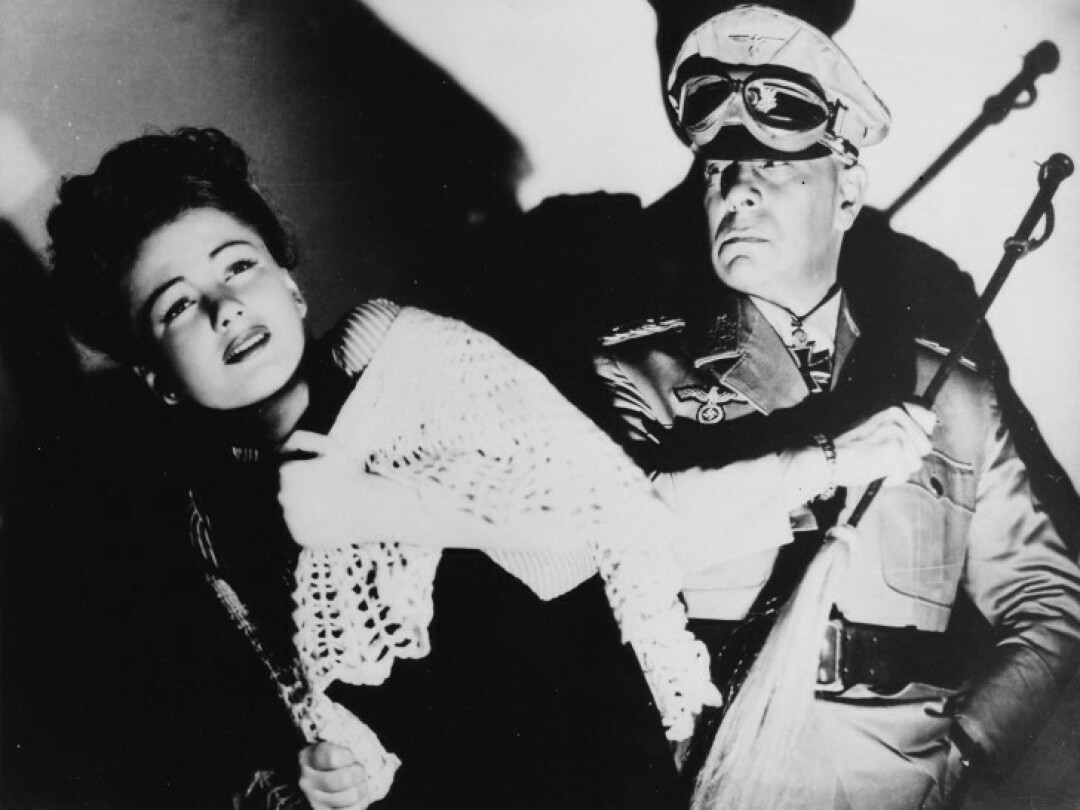 Anne Baxter and Erich von Stroheim in a publicity shot for Five Graves from Cairo.

The story takes place the same time as Five Graves, at the fall of Tobruk. In the fighting, the tank has been separated from its unit and now has been ordered to retreat to the south, with the hope of rejoining their unit.

Shortly after setting off across the Libyan desert, the tank encounters a bombed-out British field hospital, where they pick up British medial officer Capt. Halliday and four soldiers representing nations of the British Empire – Australia, Ireland and South Africa – as well as a tough and bitter Free Frenchman, Corporal Leroux (Louis T. Mercier), but known to all as “Frenchie.”

To add to the international flavor of this motley crew, they are joined by Sudanese Sgt. Major Tambul (Rex Ingram) and his Italian prisoner, Guiseppe (played by the always good J. Carroll Naish).

With a limited supply of food and water, Gunn wants to leave the Italian prisoner to his own certain death, but Gunn finally gives in and allows Guiseppe to join them.

While the tank is stopped for a break, a German fighter plane appears (actually, because this was shot during the war, Columbia Studios was unable to get its hands on German equipment for the film, so this is an American P-51 Mustang pretending to be a Messerschmitt).

Gunn shoots the Nazi fighter down, but after it has strafed the tank several times, mortally wounding British soldier Fred Clarkson (Lloyd Bridges in one of his first credited roles – as a Columbia contract player, he had a couple dozen uncredited roles dating back to 1937).

The tank finally makes it to an outpost watering hole, where they decide to make a stand to prevent a German battalion from getting water.

I love the idea of this movie – a diverse group of Allies thrown together with an Italian who denounces fascism and a Sudanese Muslim, crossing the desert with the shared goal of stopping the Nazi menace, well, they just don’t make ‘em like this anymore.

Oh, wait! Forty years after Sahara was made, director Andrew McLaglen remade Sahara, almost word for word, starring Jim Belushi in the role of Sgt. Joe Gunn. I tried it. All I can say is that Belushi is no Bogie. It’s available on Amazon Prime.