The great Ella Fitzgerald gets her due in Netflix doc 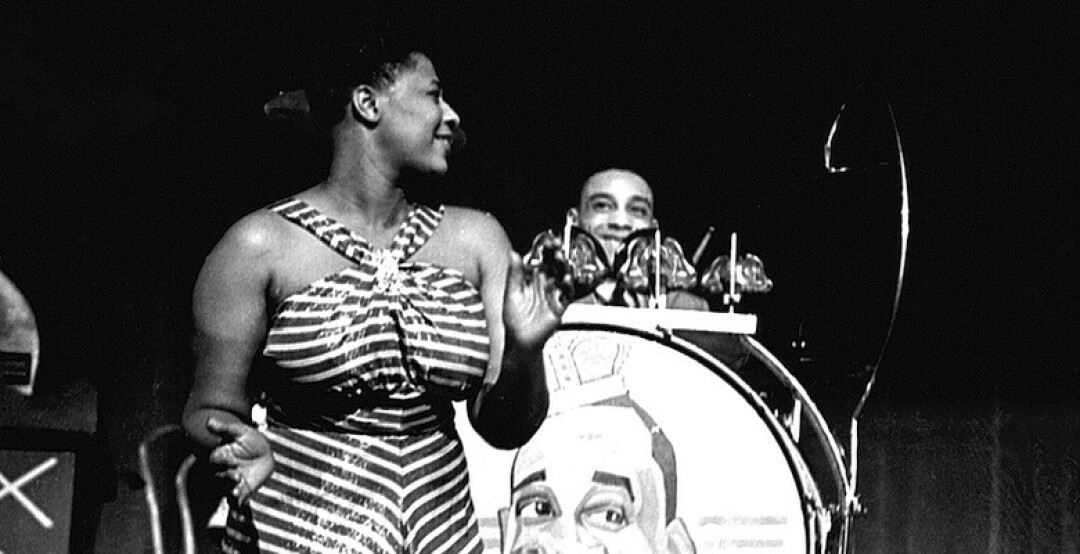 “Forgive me if I don’t have all the words. Maybe I can sing it and you’ll understand.”

“I know I’m no glamour girl, and it’s not easy for me to get up in front of a crowd of people. It used to bother me a lot, but now I’ve got it figured out that God gave me this talent to use, so I just stand there and sing.”

“The only thing better than singing is more singing.”

All of the above are words uttered by the great Ella Fitzgerald.

Director Leslie Woodhead described his documentary Just One of Those Things about the enigmatic Ella Fitzgerald as a labor of love.

“As a lifelong jazz fan, this has been a labour of love for me. The film follows her extraordinary journey over six decades as her sublime voice transforms the tragedies of her own life and the troubles of the times into joy.”

First appearing on BBC 2 in 2019, Just One of Those Things recently appeared on Netflix, and beyond the jazz fan, this documentary should appeal to anyone interested in how the human spirit can soar above the most impossible conditions.

In short, If you are a sucker for a good story well told, be prepared to shed some honest tears as Ella Fitzgerald’s story unfolds before you.

The film opens with black & white footage of Ella absolutely ripping and riffing her way through “Fly Me to the Moon.”

And then the story begins of the skinny, homeless teen who lived by dancing for nickels on street corners in Harlem – described at the time as “the largest colored city in the world” – finally going to the great Apollo Theater in Harlem in November 1934 to enter a talent contest as a dancer, but after seeing two fantastic sister dancers, decides to sing instead. It was her first time singing in front of an audience.

Dancer Norma Miller was in the audience that day, and she recalls that she and the group she was with were not impressed by the girl in the dirty dress and boots standing on the stage of their beloved Apollo.

“My legs were so skinny, I used to wear boots so nobody could see the bottoms of my legs,” Ella explains.

“We booed her,” Miller said. “Can you imagine, we booed Ella Fitzgerald?”

And then the girl started to sing and the booing stopped.

“We heard a sound, I’m telling you,” Miller said. “It was so perfect. She shut us up so quick you could hear a rat piss on cotton.”

I’m not sure what that expression is supposed to mean, but Ella won the day. She knew that day when she felt the love from the audience that she would spend the rest of her life singing.

That appearance was the spark that started an incredible 50-year career that saw her go to the top of a genre when she was labeled “Queen of Jazz,” and later, when producer Norman Granz had set her on the path of interpreting the Great American Songbook, she became the “First Lady of Song.”

If only the documentary could focus solely on the music, but, no, because of the times, race is a major part of Ella Fitzgerald’s life and we have to hear the ugly stories of white people who believe they are the superior race.

“Everything was race,” Norma Miller says. “You couldn’t go to Woolworth’s across the street. If you were black, you couldn’t try on a hat in the store. They wouldn’t have black girls on the cash register.

Ellla Fitzgerald experienced racism long into her career. The documentary tells the story of her arrest in Houston in October 1955 when Houston cops broke into her dressing room during one of Norman Granz’s Jazz at the Philharmonic tours. Granz was also serving as Ella’s manager.

When the plainclothes vice cops arrived, they found Dizzy Gillespie, saxophonist Illinois Jacquet and Ella’s personal assistant Georgina Henry playing dice in Ella’s dressing room. Ella was not a part of the game, but was in the room with a cup of coffee and piece of pie.

Granz then entered the room and saw one of the cops going into the bathroom. Thinking he was going to plant drugs, Granz told the cop, “I’m watching you,” which caused the detective to push his gun into Granz’s stomach and say, “I oughta kill you.”

The cops arrested the three dice players, Ella and Granz.

When approached by reporters at the police station, Ella said, “What is there to say? I was only having a piece of pie and a cup of coffee.”

They posted bond and were able to return for the second half of the concert without the audience knowing what had happened. Police eventually dismissed the charges.

The year before Fitzgerald had performed at a small jazz club in Los Angeles, where Marilyn Monroe was in the audience. Monroe was already a big fan, and the two became fast friends.

Once asked to name her favorite singer, Monroe answered: “Well, my very favorite person, and I love her as a person as well as a singer, I think she’s the greatest, and that’s Ella Fitzgerald.”

When Monroe learned that the singer was not able to book a show at LA’s famous Mocambo nightclub, Monroe went to the owner and promised that if he booked Ella, Monroe and her celebrity friends would come every night. On opening night Monroe was in the front row with Frank Sinatra and Judy Garland.

But even without Monroe’s help, Ella’s Mocambo shows sold out and her two-week stay was extended a week.

She never had trouble booking another big club again. However, at a gig in Colorado, Monroe flew to see the show and learned that the owner of the venue wouldn’t allow Ella and her band to enter through the front door. Monroe refused to enter the club if Ella couldn’t enter the same way. Of course, the club owner relented.

The arc of her career after her debut at the Apollo put her right at the top from the start, singing for the top swing band of the time, Chick Webb’s Orchestra, the house band at Harlem’s Savoy Ballroom.

One of the documentary interviewees describes Webb as a hunchbacked dwarf, but the truth is that he injured his spine in a fall that stopped his growth and gave him the appearance of a hunchback. He played a specially designed drum set and was recognized for having a sound all his own.

So that set Ella up to be the dominant swing singer of her generation. When Webb died in 1939 at the age of 34, Ella inherited the orchestra, but with the draft and World War II, the orchestra disbanded and Ella began her next adventure as a bop singer.

I wish the documentary had spent some more time on this aspect of her career, when she developed scat singing to an art form that has yet to be equaled with adventurous bebop vocal solos rivaling those of the instrumentalists.

We do learn quite a bit more about her time with Granz when he turned her into the First Lady of Song with her interpretations of the Great American Songbook.