Red Betty and the Murder Farm 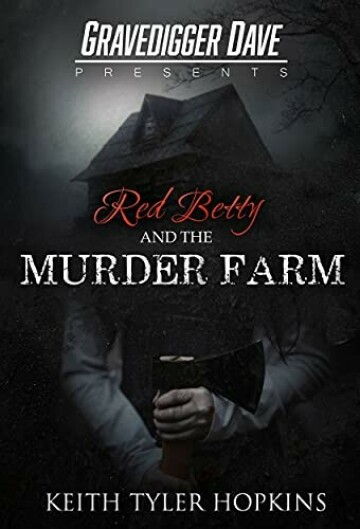 Keith Hopkins just dropped a short novel called Red Betty and the Murder Farm. It immediately stands out from his previous contributions for horror enthusiasts.

A couple years back, Hopkins made his introduction to horror films by releasing a more regional supernatural/horror anthology, Gravedigger Dave’s Halfway House, it ended up being a filmmaking project that led to Hopkins to ask questions from the makers of...which ended up as the The Horror Anthology Handbook.

I won’t deny that these things are definitely horror related, but they both came off as a documentary or perhaps even relied heavily on a journalistic approach. Anyone can read or watch Halfway House or the Anthology Handbook: it’s interesting, might hold the interest of someone who is interested in local phenomena or genuinely loves horror anthologies, but horror isn’t meant for just the “general audience.”

Horror must be weird and even a bit gritty: the more imagination the better.

Enter Red Betty and the Murder Farm. This is a quick read that instantly hits on possibilities of how it could all go farther. It’s a blend of country Texas Chainsaw Massacre horror, mixed with Resevoir Dogs gangster violence enhanced by a Dick Tracy-worthy line up characters, ending off as a superhero origin story.

I should just say this isn’t going to take days to read and the story picks up pretty fast following Betty around her murder farm. It doesn’t take long for nefarious characters to enter the scene, which she somewhat begrudgingly cleans up after. The latest victim on the chopping block spins a whole new turn in her life and the future of the Murder Farm.

I could go on about it, but rather than risk spoilers, I’m going to cut straight to an interview with Hopkins, himself about it. As far as a horror/crime short story goes, it’s worth the ride.

Each chapter gets more and more wildly visceral and is aptly named to this mix of carnal mayhem. We talked with Hopkins about the book and some of his endeavors with the horror genre:

Q: I believe it has made second place on free horror reads on Amazon?

Keith Hopkins: Yeah it did hit second place on free reads (and then plummeted when it got to the paid charts, but that’s OK). And I’m really happy it’s at Zenith (Bookstore). I’m going to try and get it into Fitger’s bookstore as well.

Q: Have you seen any interest in the Anthology guide?

Keith Hopkins: I’m pretty happy with the response to horror anthology handbook, but Red Betty has gotten off to a much stronger start

Q: Do you have any underlying hopes of Red Betty ever seeing a screen?

Keith Hopkins: My god, yes! I’m running a Facebook ad for it that only people with an interest in filmmaking living in LA and Hollywood will see. It’s a total Hail Mary, but you never know

Q: What would be your ideal location if it were ever to be filmed?

Keith Hopkins: I’d love to see it filmed on a remote farm somewhere between Duluth and the Cities. I’ve never actually scouted locations, but I can see it in my mind. It just needs an old farmhouse, and old barn, a shed and some woods.

Q: There is a bit of that in the area. I was curious about the mother superhero character that just dies in the car chase? Have you ever thought of the back story. I mean, is her quick death leading at all to a prequel? This is also kind of a superhero origin story. Is there any thought to furthering what has been written?

Keith Hopkins: I already have book two mapped out on paper. It’s both a prequel and a sequel that crosscut back and forth like Godfather Part 2. In present day, Red Betty and The Bloody Boy hit the road in search of the villains who got away at the end of book one. In the past, Mum and Pop are a Bonnie and Clyde-type duo rampaging across the country and the superheroine you mention is right on their heels. When Mum realizes she’s pregnant with Betty, they decide they need to re-evaluate their lifestyle choices. That’s when they get the idea to start the Murder Farm.