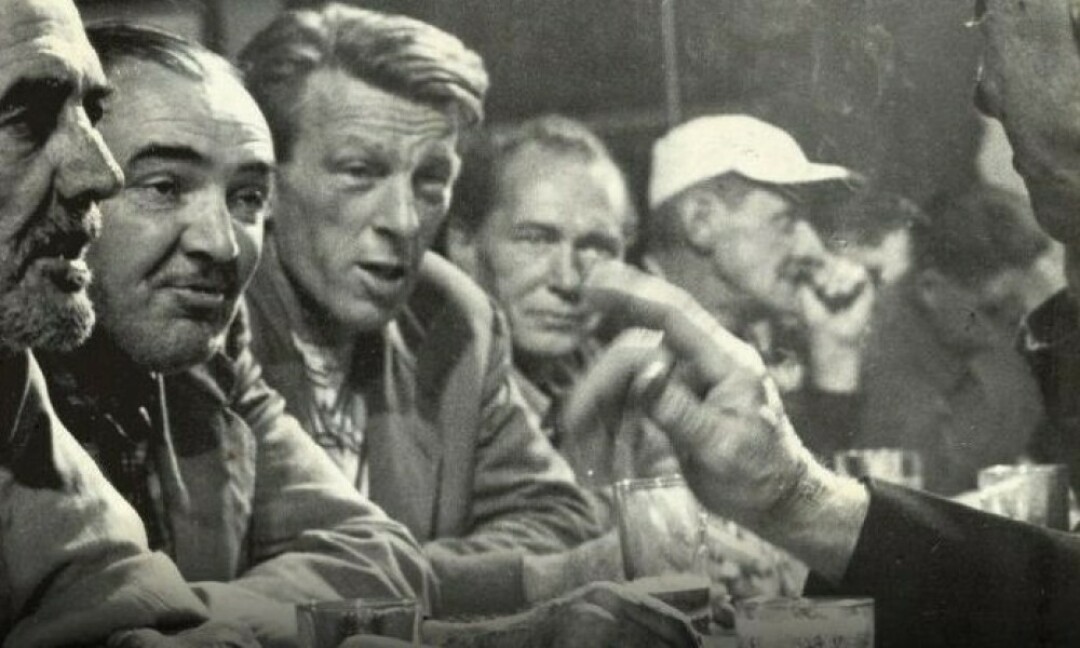 The Criterion Channel continues to outdo itself. Wandering over recently, I found a new collection of 61 films taking place in New York City. Lots and lots of good stuff here, but the first thing I dove into is a strange “documentary” shot in 1955 and released in 1956 called On the Bowery.

I refer to it as a strange film because it is supposed to be a documentary, and it’s won awards in that category, yet it’s unlike any documentary I’ve ever seen.

While there obviously are cinema verite shots of people – mostly broken down men – on the Bowery, there is a bare outline of a story here that is obviously staged. I’ve also seen this movie referred to as a piece of “docufiction,” which is the first time I’ve seen that word.

We see scenes of bowery denizens in various stages of blastocity – from first comforting sip to dead drunk and passed out on a sidewalk. We see cops rousting drunks in a black and white world. These scenes are documentary by nature.

The premise of the movie is three days on the Bowery, sort of through the eyes of a newcomer, Ray Salyer, an itinerant railway worker who has blown his pay on drink, had his meager belongings stolen by a newfound pal, and hopes to find some day labor to earn enough to move on to the next railroad job.

Ray was who he appears to be in the movie, not quite broken by life yet, but getting there. Teetering on the brink. At one point he tries to stay sober, but it doesn’t last.

The story goes that after the release of this film Ray was offered more movie work, but he turned it down, hopped a train and was never heard from again. “His fate is one of the great mysteries of cinema,” states a website dedicated to the film (ontheboweryfilm.com):

After a silent opening accompanied by the music of Charles Mills, Ray arrives on the Bowery in the daytime, dusty and with a battered suitcase in hand. He heads straight for a bar, takes a seat at the bar and orders a glass of beer.

A friendly fellow sidles up to him and starts a conversation by asking Ray where he’s been working. After some chit-chat about working on the railroad, the guy hits Ray up for a drink. Ray tells him he’s drinking beer, and he’d be happy to buy him a glass. The guy says he’d rather have wine, but gladly accepts the beer and quickly finishes it.

This exchange appears to be the dividing line between a true denizen of the Bowery, whose choice of drink is the cheaper and more potent muscatel, and the guy on the fringe, who sinks to the Bowery when he’s down on his luck, but always with the hope of hooking another job. Those are the guys who drink beer.

The guy invites Ray to come meet “the boys,” a quartet seated at a small table. Ray goes to the table, they find him a chair, and seeing they are dry, he offers to buy a bottle.

“I know you guys are muscatel drinkers,” he says. “I don’t drink wine myself, but if you make it port, I’ll buy a bottle. I don’t drink that muscatel.”

While the men talk, Gorman Hendricks enters the bar and soon joins the table. When the bottle is gone, everyone takes off except for Gorman and Ray.

Ray asks Gorman if he can buy the next round, and he admits to not having “penny one.” He asks Ray what’s in the suitcase. Ray says clothes, and Gorman suggests he sells some for drinking money.

They paw through a few rags until Gorman finds a pocketwatch that excites him, but Ray says no, the pants will have to do.

The next scene features frenetic woodwinds as corner trading goes on. Ray finds a guy who buys his trousers, and he and Gorman and the suitcase head for a bar.

Composer Charles Mills, a Guggenheim Fellow who studied with Aaron Copland, supplies the soundtrack of woodwinds and strings, the exception being the harpsichord ending.

Ray’s not happy about what he gets for the pants. As they are about to buy their first drinks, Ray says. “I don’t want to spend too much on drinks. I want to have enough for a flop.”

Then we see a montage of scenes with Ray, Gorman and the suitcase going to bars until Ray is stumbling drunk. He picks a chunk of sidewalk to fall asleep on, and Gorman leaves with the suitcase. He trades the suitcase for a flop.

Then we get a series of scenes of dawn on the Bowery, with dirty, drunken, beaten-up men asleep in the streets and alleys of the Bowery. Not a woman in sight.

Ray wakes up and asks a fellow street dweller where he can find some work. The man pushes a cart around the streets. He tells Ray to follow him.

Whoops, spoke too soon about no women. There’s a woman sitting on a stoop, sharing a bottle of something that could be Sneaky Pete with a guy who was shaking a fist in the cinema verite opening scenes.

Sneaky Pete – a mixture of muscatel and port mixed with water and grain alcohol – was sold on the Bowery during the 1950s. We actually get a scene in this movie of three men having their morning shot of what they call “heat,” some sort of drink they create by squeezing out the contents of a sterno can. Sterno was known as “canned heat,” hence the name of the drink.

No one is seen drinking alone on the Bowery. It’s a communal experience. One random character in the movie seems to be on Cloud 9 as he tells his drinking partner that he loves his wine. Except for a couple of brief instances in the movie, these men appear to be mellow, congenial drunkards who sometimes have to go to extreme means to obtain the glow that keeps them going.

It was summed up beautifully in 1962 when Elmer Bendiner wrote a story on the bowery for the New York Times Magazine:

“The Bowery man’s drinking style is less formidable than that of the respectable working alcoholic. The Bowery man rarely drinks alone with the single-minded objective of a quick knockout. He is a social drinker, and not only does he pass the bottle, but he must combine with his fellows to raise the price of one. He drinks to achieve a pleasant plateau from which he can survey the world and his fellows with some equanimity. He craves an illusion of friendship without the responsibilities that friends impose. His alcoholic haze fragments the harsh light of the world and diffuses it so that edges are blurred and the world is soft.”

After spending the night on the street, Ray finds a day delivery job that gives him hope to move on to his next job. When Gorman finds him sitting in an alley, Ray is drinking a soda. Gorman suggests they get a drink. Ray says he’s off the drink, and he heard about the local mission. He’s going to check in there and stay dry and on the straight and narrow.

We get a look inside a real mission and its service, with a pastor who looks nothing like the shrunken broken men in the pews. He looks well-fed, alert, well dressed, articulate. Yet he says he came from among their ranks and was saved in a mission. He tells them no man sets out to end up on the Bowery – the maddest and saddest street in the world – but there are no hopeless cases with God.

The sermon is followed by a meal of thin soup, bread and coffee.

While in the dinner line, Ray asks the guy in front of him how the mission works, and learns he can stay there up to a week, but must spend the first night on the floor so his clothes can be fumigated and washed and he can clean up before moving into the dormitory. Sobriety is the only payment required.

Ray doesn’t last long. He watches guys placing newspapers on the floor to sleep on, and he bolts for a bar, where he meets Gorman.

Gorman says he worked for the Washington Times and was also a very good doctor.

Ray toasts Gorman and says, “Me, I only care for one thing.” And then takes a drink.

Ray meets a woman just as he appears to be entering the mean drunk stage. He threatens to punch Gorman in the nose, and then he goes after another guy. In the next scene he and the woman weave their way out of the bar, get to the next doorway, and Ray violently pushes her in the face away from him and she takes off. Ray heads into an alley, followed by two guys who mug him and steal his last 80 cents after knocking him out.

If this is a documentary, how could director Lionel Rogosin have let his star get beat up without intervening? Did it really happen and this was a re-enactment?

Next day, we see Gorman asleep in his tiny flop, and Ray still unconscious on the ground as three guys enter the alley to make their breakfast, the previously mentioned Sterno drink. When someone alerts the trio that the cops are coming, they lift Ray up and walk him out of the alley. Later we learn that they also gave him a drink of the “heat” to help get him on his feet for the day.

After two nights in the flophouse, Gorman asks for the suitcase so he can pawn what’s inside, and promises to come back to pay for his stays. After getting his ill-gotten gains, he heads to a bar, where a forlorn Ray is sitting alone at a table with nothing to drink. Gorman suggests they have a drink.

“I’ve only said that a thousand times,” Gorman says.

Possibly feeling guilty, Gorman says a buddy is supposed to show up with dough, and when he comes, he’ll give Ray enough to go.

“I’ve heard that many times before. I’ll be seeing you around,” Ray says and leaves.

Gorman goes into the toilet, counts his cash, pulls off a few bills, then heads outside and finds Ray leaning against a building.

He says his pal showed up.

“I’ll divide the wealth with you. It’s not much, but it might help,” Gorman says. He passes the thin wad of bills to Ray and they part. Gorman heads to the bar, where he sits at a table with some of the same guys from earlier in the film.

Gorman tells them he got “the boy” clothes, put money in his pocket and put him on a train for a new job that Gorman had gotten for him.

“And the kid’s gonna come through,” he says.

The guy next to him says, “Let me tell you something. He’ll be back.”

A crazy harpsichord starts, we see a shot of Ray looking worn and beaten as he makes his way from the Bowery, and then shots of what Ray might look like in a few years, sad, weary, defeated faces of the men of the Bowery.