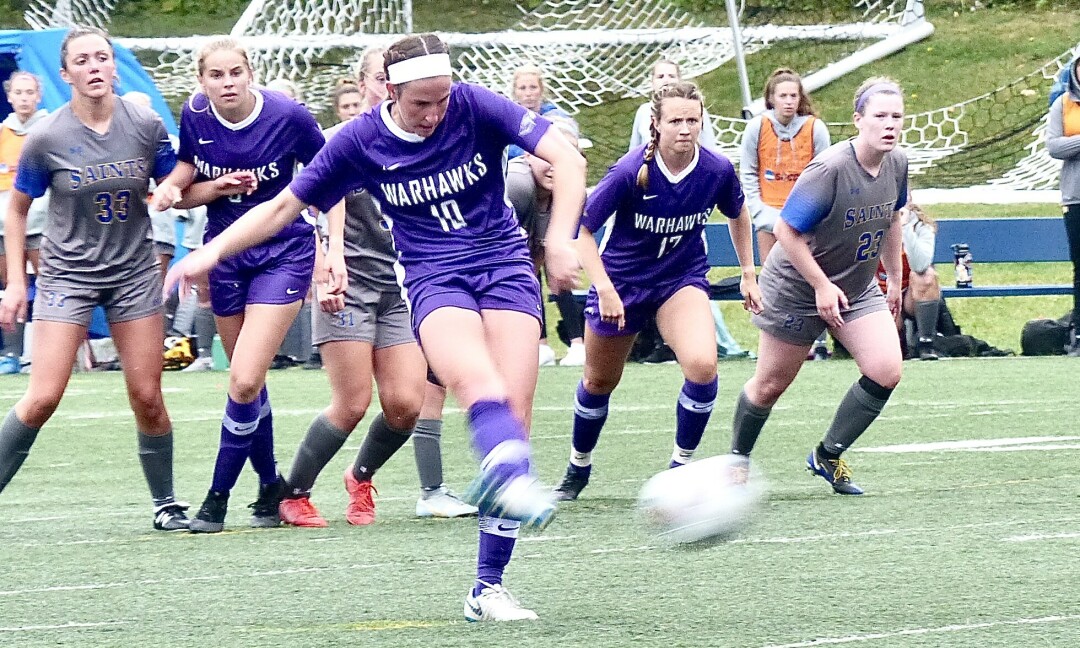 Wisconsin-Whitewater’s Anna Brodjian blasted a penalty kick into the UMD goal to clinch the Warhawks 2-0 victory at St. Scholastica. Photo by John Gilbert.

The two best college football teams in Minnesota that aren’t Division I will collide Saturday at Malosky Stadium when Minnesota State-Mankato invades to take on the challenge from Minnesota Duluth at 6 p.m.

When the Northern Sun coaches conducted their preseason picking, MSU-Mankato was ranked No. 1 and UMD was No. 2, with both of them favored to win the NSIC South and North, respectively.

Therefore, when they play it will be one of those oddities that will be a non-divisional game, but a conference game, and while both could very well go on to win their divisions, the game becomes a major barometer for which is truly the best team overall in the NSIC. There has been little argument in recent years, with Mankato dominating, and taking runs at the NCAA Division II championship as well.

But last week’s season-opening games puts a whole different emphasis on the collision of the two rivals, because even though both of them won, they took decidedly different routes to their victories.

UMD is led by John Larson, who is the unquestionable leader of the offense, capable of beating teams with three elements – passing, running, and perhaps most importantly the ability to read defenses and adjust whatever play is called to whatever the sixth-year Bulldog quarterback decides will work best against that assembled defense. That ability to improvise and then to execute gives Larson the chance to work his magic.

Last weekend at Upper Iowa, in Fayette, Iowa, UMD had the chance to wipe out the shocking memory of an upset loss to the Peacocks – the Peacocks! – in their last meeting, in 2019 at Malosky Stadium.

The Bulldogs did exactly that, thanks to Larson, in a 41-14 romp. Larson completed 22 of 33 passes for 447 yards and six touchdowns, including 61- and 84-yard bombs to Armond Carmickle, who caught five of Larson’s passes for 209 yards, with his two TD catches in the first half, when the Bulldogs settled the issue with a 34-7 headstart.

If there could be a criticism, it might be that the Bulldogs didn’t have much of a rushing attack, although logic says when the passes were clicking so effectively, Larson didn’t have to read the “rushing” part of the read-offense attack.

In Mankato, meanwhile, Northern State of Aberdeen, which was picked fifth in the North and eighth overall in the NSIC, shocked the Mavericks by jumping ahead and staying there until the closing minutes. The passing of Hunter Trautman accounted for four touchdowns and a 34-24 Wolves lead with five minutes left.  Mankato rallied to tie the game with 38 seconds left, after recovering a Northern fumble on the Northern 39. J.D. Ekowa scored on a 2-yard plunge, and Luke Williams tied it with a place kick, 34-34.

In overtime, Northern was given a 15-yard penalty on the first possession, and missed a 61-yard field goal attempt. The Mavericks retaliated to march within range, and on fourth and 1 at the 16, Ekowa scored on a 16-yard scramble.

The narrow escape will undoubtedly cause the Mavericks to focus totally on the Bulldogs, while Larson’s scoring touch and the realization that Mankato appears vulnerable to a passing attack should boost UMD’s confidence. All that’s riding on the game is national ranking and a possible playoff spot, a couple months down the road.

The Saints got a taste  of how tough the WIAC is when Wisconsin-Whitewater spanked them 2-0. The Warhawks got a 1-0 lead when Olivia May scored 16 minutes in, but after a day of frustration, the Saints managed only one shot – by Alexa Ickert in the first half – to Whitewater’s 11. St. Scholastica scoring star Morgan Friday was sent sprawling more than a couple times by the aggressive Warhawks, although they couldn’t secure the victory until Anna Brodjian blasted in a penalty kick in the 64th minute.

On Sunday, the Saints took their home turf again to face Wisconsin-Eau Claire, but Friday and the Saints fared better. Friday scored for a 1-1 tie on a penalty kick, and later countered another Eau Claire goal with her second goal of the game and the teams battled to a 2-2 deadlock that withstood two overtimes.

The Gophers made a strong bid against Ohio State in their Big Ten opener but an inability to prevent the explosive Buckeyes from scoring on spectacular long touchdown plays ultimately cost Minnesota a 45-31 decision. The Gophers surprised the Buckeyes by gaining a first-half lead, and reinforcing their intentions by vaulting ahead 21-17 in the third quarter. Star running back Mohamed Ibrahim ran hard and proved his mettle by gaining 163 yards on 30 carries through three quarters. But Ibrahim went down awkwardly and apparently tore an Achilles tendon, which we’ve since learned will require surgery and knock out the biggest Minnesota threat on the roster.

In the final analysis, though, Ohio State freshman quarterback C.J. Stroud overcame early jitters to connect on 13 of 22 passes for 294 yards. Most of those yards came on scoring passes of 71, 56, 70 and 61 yards, as an amazingly speedy corps of receivers simply ran away from Minnesota defenders to get wider open than Stroud could hope for in practice passing drills. They added a 61-yard touchdown run on a remarkably simple right-end sweep, and a defensive TD on a 32-yard return of a fumble.

Those folks who enjoy snowmobiling during our wonderful winters may have suffered a year ago when the annual Sno-Cross race at Spirit Mountain did not open the pandemic-altered season last year. That event annually draws huge crowds to take in the highly competitive program, and we can safely assume thousands have been looking forward to its return to normal this Thanksgiving.

Instead, there will be no race at Spirit Mountain this season. The racing organization decided to delay the start of the season until New Year’s, and then came a disturbing breakdown of communication between the race organizers and Spirit Mountain, which couldn’t agree on a date until the entire schedule was filled, with no Duluth race involved.