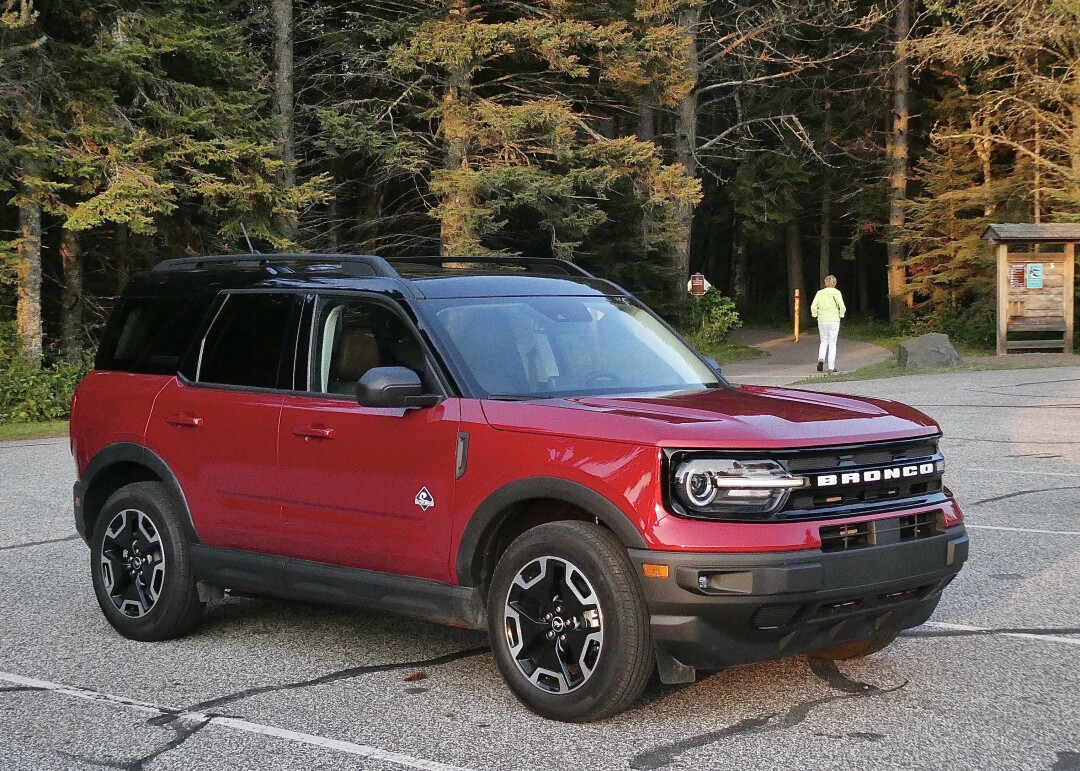 The new Ford Bronco Sport – the smaller of the two Broncos being introduced for 2021 – may be the big seller for Ford because of its sophistication as a utility vehicle for everyone, not just heavy-duty off-road types.

There are various models within the Bronco Sport group, and having reported on a couple of them, it’s time to also delve into the Outer Banks.

Or maybe you dive into the Outer Banks, if you’re taking a late-summer vacation.

The inner features are set up for folks or small families that have an adventurous side and may want a vehicle that will do anything and everything as a small-family hauler, but also can take the water-toys along and make sure the leftover san can be easily washed out, or the family hound can be brought home messy.

I found the Outer Banks had its biggest surprise under the hood, where the Rapid Red Bronco Sport carried Ford’s smallest mainstream engine, a 1.5-liter, 3-cylinder, turbocharged up to EcoBoost standards, which means 181 horsepower.

When you go for a test-drive, do not bypass this one, just because it’s a 3-cylinder, which seems weird to the sensibilities of American buyers used to V8s, V6s or 4s.

In building engines, a lot of 4-cylinders run smooth, but a lot of them don’t, too, because they have a harmonic vibration that frequently needs to be settled down with anti-vibration techniques, up to and including counter-balance shafts. Remember companies such as Volvo and Audi used to have 5-cylinder engines that had the same effect on buyers, but having 3 or 5 cylinders means inherently vibration-free operation.

So when you take a drive in a Bronco Sport, try the Outer Banks and pretend that you’ve been told it is either a small V6 or a quite-potent 4-cylinder, and you’ve be impressed.

For those who understand all that, knowing it is a turbocharged-3 will be an attraction, and the way it zips around in traffic will impress you even more.

What will astound you, more than just impress you, is when you stop to refill the fuel tank and calculate that on your last tankful you got 32.4 miles per gallon. That is not just an estimate, either.

The test vehicle I drove for a week up and down the North Shore, revisiting Hwy. 61 along Lake Superior’s wildfire-smoke-infested air in this late summer of 2021, was driven in both highway travel and up and down the hills of Duluth, and in combined driving, our refill calculated out to 32.4.

Now, in an all-wheel-drive SUV, even if compact, that’s impressive, although I must admit we never bothered with the AWD in the heat of August, which has now proven to be the hottest in Duluth’s history.

For those unfamiliar with the Bronco Sport, it gets the old name on an all-new project, which is a sort of boxy vehicle plunked down on a smaller platform from the full-sized Bronco.

No sense creating an all-new platform, though, because the popular Ford Escape compact SUV is right across the showroom and is one of Ford’s most popular vehicles. So Ford put the neat new body on the Escape platform.

With some surprise, I find the Bronco Sport, boxy or not, handles with quicker agility than the sleeker Escape, so the match works.

Comfortable bucket seats up front, and fold-down in the rear are covered with this special bullet-proof fabric that feels rugged and yet not uncomfortable, and again is aimed at efficient clean-up.

You could, as mentioned, hose out the rubberized rear storage area, after you’ve folded the rear seats down, or by leaving them up.

The larger EcoBoost 4 develops 245 horsepower, which is more than enough for any service. I say more than enough because I am convinced the EcoBoost 3 with its 181 horses can breeze up Duluth’s steepest mile-long avenues with ease.

In fact, a feature I really appreciate is the hill-start assist, which some may find unnecessary.

When you drive up Lake Avenue, however, and come to a four-way stop at Fourth Street, for example, you step on the brake to stop fully, and the stop-start system kills the engine. The hill-assist holds your position in place, though, so when it’s your turn, you step on the gas, the engine starts instantly and the hill-assist releases in the same instant, and you’re off.

The 8-speed automatic transmission is standard on all Bronco Sport models, whether you prefer the Badlands, or any other model to the Outer Banks.

All the connectivity stuff is there, with rear-view camera, remote keyless entry and remote start, reverse sensing, terrain management, wireless charging, power moonroof, B&O audio system with 10 speakers, the latest version of Ford’s Sync, LED lights fore and aft, foglights, tailgate assist with a lift-glass that also is handy when you don’t want to open the whole lift gate.

One of these days, I’ll get the just-released larger Bronco for a test-drive, but as of now, the Bronco Sport is fully satisfying from the standpoint of creature features, comfort, utility, as well as power and handling agility, and the climate control and audio system.

And any thought that the EcoBoost-3 won’t be enough power is easily overwhelmed why the realization that you might have your hands on a quick and agile compact SUV that is also capable of getting over 30 miles per gallon.

The other day, I went to fill up with gas and found I was too far away from one of those stations that advertised $2.99 per gallon, so I settled for one that sold regular for $3.09 a gallon. As I hooked up my credit card, I noticed that premium fuel was $3.59 a gallon at that very pump.

You wonder why they don’t boast about $3.59, or that you have to pay 60 cents more per gallon for premium?

Calculate that out over the course of a month, or a year, and you will appreciate that your vehicle runs just fine on regular. And then think how neat it would be if your vehicle ran on regular – and got 32 miles per gallon!