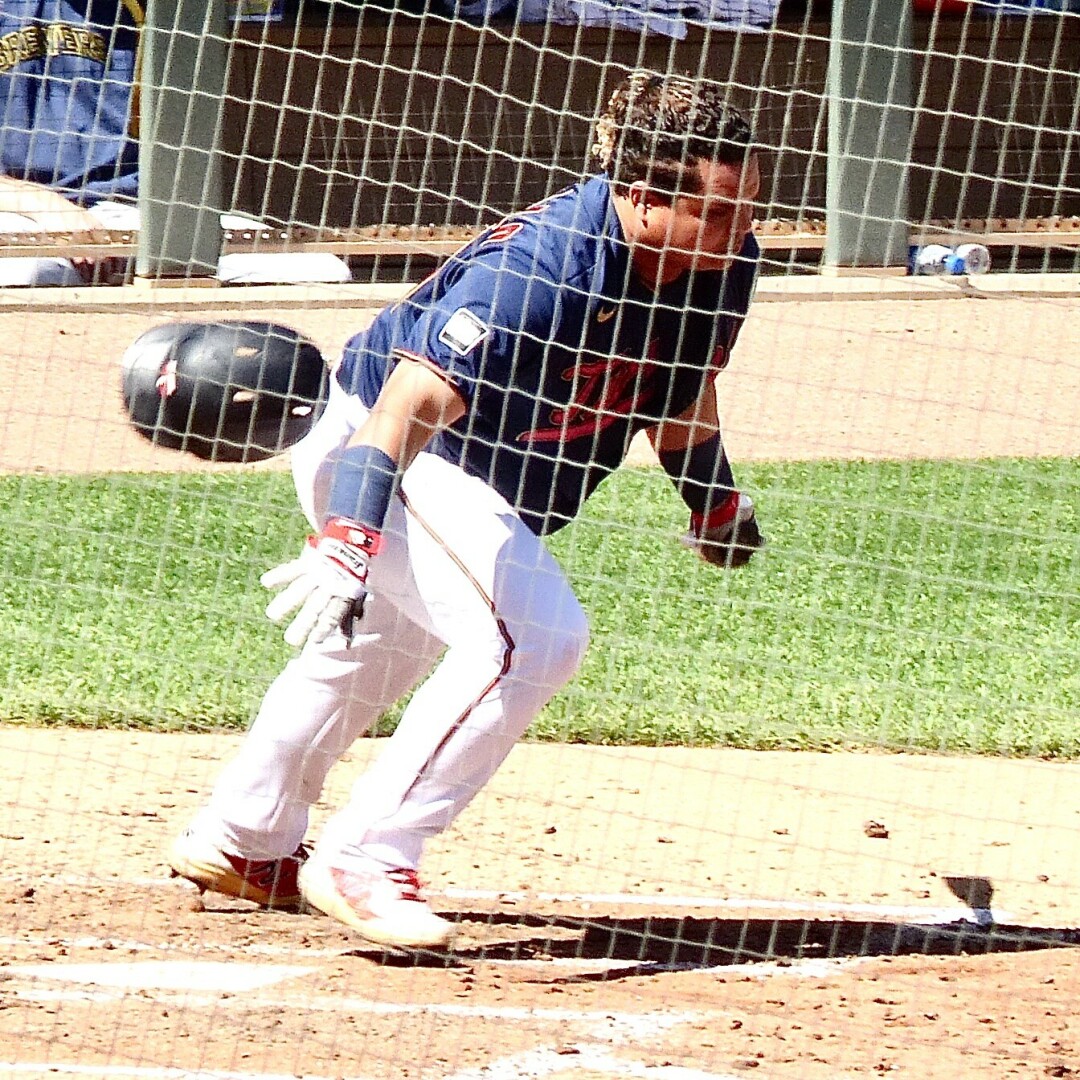 Helmet one way, bat the other, Luis Arraez puts on a show every swing. Photo by John Gilbert.

This is the week football takes over, and the transition should be particularly easy in Minnesota, where the Twins are playing well with their future prospects playing out the Major League Baseball season while the big publicity machines are hyping the University of Minnesota and the Vikings as they head for their official starts to the season.

The UMD Bulldogs also command a favorite’s role in Division II football, where they open Thursday at Upper Iowa in the Northern Sun Conference – the same night the Gophers open Big Ten play with high hopes.

The Gophers are loaded, but their opener is against Ohio State, a team that is reloaded and has designs on winning the Big Ten and possibly displacing Alabama as national champion.

While the Bulldogs head off to Upper Iowa, they will be led by returning senior quarterback John Larson, who is not only an accomplished passer but fully capable of leading the Bulldogs in rushing as well. UMD comes home for its home opener in Week 2, when Minnesota State-Mankato comes to Malosky Stadium for a 6 p.m. game. The two-division NSIC breaks the same way as in recent years, with Mankato ranked first in the South, and UMD first in the North. In the overall ranking, UMD is the only North team in the top five, which consists of 1. Mankato, 2. UMD, 3. Augustana, 4. Sioux Falls, and 5. Winona State.

That means that beating teams such as Mankato, Augustana and Winona will go a long way to helping UMD gain post-season impact in NCAA regional tournaments.

The Gophers face similar high hopes, having come off a strong finish last season to qualify for playoff action. But part of Minnesota’s success is the simple fact that Ohio State and Michigan – the two perennial Big Ten national powers – were both absent from the Gopher schedule.

This season, the Gophers open against Ohio State, which could turn the lofty hopes into a cloud of dust.
On Sunday, Sept. 12, the Vikings open with high hopes but serious questions surrounding quarterback Kirk Cousins and his ability to turn broken plays into success during the NFL season.

St. Scholastica opens its football season as a new team in the MIAC (Minnesota Intercollegiate Athletic Conference). The Saints open against their Division III slate against Sewanee at 1 p.m. Saturday, Sept. 4.
While the transition to football isn’t always smooth during the baseball season, we made a family trek to Target Field last Sunday for our annual Twins game. They played Milwaukee, a team with a solid base, strong pitching and a realistic chance of making a run at the World Series.

The Twins are a team that keeps taking series victories from division-leading teams, and they won the first two against Milwaukee in exciting fashion.

But this is a Twins team using young or new, or both, pitchers to supplement a starting rotation that has entirely left the team.

Kenta Maeda, the lone remaining starter, will have surgery on his arm and may miss the rest of this season and all of next.

Jose Berrios is in Toronto where he has regained his form as a potential ace.

The young prospects look promising, and at least the Twins regained the services of center fielder Byron Buxton, after several injuries knocked him out of what was a superstar season.

Miguel Sano, looking more fit than I’ve seen him, has spent the last month punishing pitches, and hitting tape-measure home runs. Josh Donaldson continues to come back from injuries to hit some meaningful homers, too, and Jorge Polanco continues to be the Twins best player, whether at shortstop or second base.

It makes the Twins fun to watch, if you can contain your interest to within specific games, or against specific foes, without concern that the Twins are hopelessly out of any sort of contention. The game we saw, the Brewers beat the Twin 6-2 and put on displays of pitching, fielding, hitting, and clutch hitting that allowed them to go on their way with their stretch drive back in order.

Along with football, UMD opens its volleyball season at a Michigan Tech tournament this weekend, and the Bulldogs, led by senior Kate Berg’s explosive kill-shots, have a great chance to make a run at Concordia of St. Paul and the Northern Sun’s extremely competitive schedule.

St. Scholastica also opens its women’s soccer schedule against Wisconsin-Whitewater at 4 p.m. on the Saints field. And while Division III compared to UMD’s Division II in sports, St. Scholastica’s women’s soccer team will be a prime Duluth sports attraction. Coach Dave Reyelts has virtually his whole team returning and a solid crop of top freshman prospects. But the big news is the return of Morgan Friday, who will be a senior with a St. Scholastica resume that is unequaled in college soccer as the Saints move into the stronger MIAC.

Friday scored 27 goals last season to lead NCAA soccer in goal-scoring — and that was in the Saints pandemic-condensed season, which was limited to nine games, including conference playoffs, with no NCAA tournament allowed. So nine games, 27 assists, equals an average of 3.00 goals per game. The MIAC may be able to stop St. Scholastica, but I don’t believe anybody can stop Morgan Friday.

A major challenge will be for the St. Scholastica administration to stabilize a weird summer of turmoil — particularly in men’s and women’s hockey. All was calm until Jackie MacMillan, the only coach in St. Scholastica history, suddenly resigned, and she said on social media that it was because officials at the top of the school has facilitated a meeting between her and a player and her parents who had complaints. MacMillan said she did it, and such a thing shouldn’t happen at the collegiate level, and she was resigning to avoid similar action in the future.

Julianne Vasichek, her loyal assistant, steps up to take over and should do a strong job at maintaining all that MacMillan has built.

Then this past week, a strange departure claimed men’s coach Kevin Moore, who, by all accounts, was popular with the players and creative in his approach to coaching. But suddenly he was out, and it took a week before the administration announced he had resigned. There had been a situation where he was suspended for three games last season for rules infringement, but nobody is yet willing to discuss whether it was a resignation, a forced resignation, or a termination.

Dave Williams, who came from Alberta to star for the Saints, went off to play in the low minor leagues for several years, then returned as assistant coach. While inexperienced, Williams has been named as interim coach of the Saints men’s team, and it is uncertain whether that means while a search for a new coach is conducted, or whether Williams has a chance to prove he can handle the job.