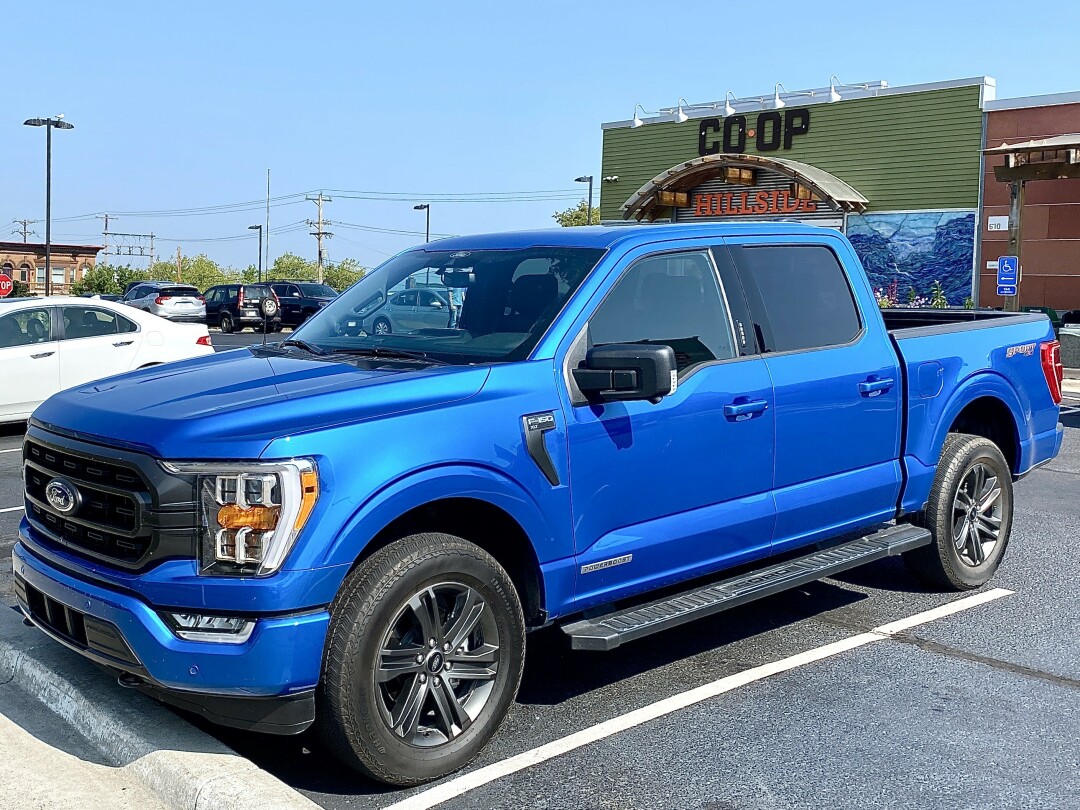 As we’ve learned how to exist through the COVID-19 pandemic, a lot of us have gotten comfortable working from home instead of in the office. Ford Motor Company is trying to take us one step beyond that – working not in the office, not at home, but in your new F-150 pickup truck.

Ford knows that its top competitors, particularly the Ram 1500, but also including Chevrolet’s Silverado, GMC Sierra, Toyota Tundra, and even the midsize Honda Ridgeline, have filled their interiors with creative features and ideas to make it more livable, so Ford has tried to do it all, with a larger dashboard screen, and a console, that is large enough to house all sorts of work-aimed things, such as file folders and just about the files themselves.

Flipping the console lid creates a desk-like surface, and the Pro Power OnBoard system makes it a virtual office on wheels.

But while loading it up with features, Ford makes sure the SuperCrew XLT over-achieves  when it comes to operating as a basic pickup truck, too!

For power, it come with the 3.5-liter EcoBoost – which Ford is now calling “PowerBoost” to designate not only a turbocharged power boost but also the added energy from a 44-horsepower permanent magnetic synchronous electric motor, fitted between the V6 and the 10-speed electrically operated transmission.

There is also a 1.5 kilowatt-hour lithium ion battery under the rear seats floor. Combining all that power gives you 430 horsepower and a whipping 570 foot-pounds of torque.

The other more useful and more obvious benefit of the hybrid moderating the turbo V6 power is that the test pickup – which came in stunning Velocity Blue that led numerous passesrs-by to casually say, “Beautiful color,” or “Nice color” whenever I climbed out of it – also is fantastic when it comes to fuel efficiency,

Having driven virtually every pickup that has come out over the last few decades, I am used to full-sized pickups getting 10-14 miles per gallon, or so, and maybe 17-18 on a good day. Adding the turbocharger won’t improve gas mileage, but adding the hybrid technology meant that driving mostly in city traffic, up and down the hills of Duluth, Minnesota, I was able to get 24-25 mpg, even while showing off the trucks power with bursts of acceleration.

Having the enlarged fuel tank also meant you could drive from Duluth to Chicago without refilling the tank, and you would still have enough left to drive around for a day or two. As I drove on my appointed tasks, and a few unappointed, I kept a closer and closer watch on the fuel gauge. When I had driven 486 miles, the instruments indicated that I still had 194 miles to go to empty. It also added that 123 of those miles were on electricity. In a lot of cases, a normal pickup truck with a potent engine might settle for 194 miles on a full tank.

All the features and technology costs a bit, of course. The basic XLT starts at $43,805, but the liberal offerings from the option list boost the total to $65,256. I’ve driven more expensive trucks, but none with the same level of useful features as this F-150 XLT Hybrid.

Inside, the SYNC system’s latest version makes connecting your smart-phone to you personally easy and without the usual bothersome challenges. The audio system is also of elite status, with a B and O sound system filling the interior with your chosen sounds. Another captivating feature is the large, dual-pane sunroof, which Ford chooses to call a Moonroof. It gives an added, airy feeling to the cabin as well as letting the sunshine in.

There also are the usual complement of front, rear and side warning alerts, and this one has lane-keeping, which electronically combines cameras and computers to nudge you back into your lane.

The two front bucket seats are firm and comfortable, and for some reason, they seem easy to climb up into and drop down out of, and it can’t just be the 6-foot running-board that runs along the lower sides. My wife, Joan, noticed the same convenience, and she is usually the first one to complain when truck’s require extra effort to enter or exit.

The rear bench seat is a 60/40 thing, and the cushions on both sides fold up and lock firmly in place against the backrests, offering more large stowage areas, which can also be used with the seats in place. The legroom in the rear is spacious, which isn’t always the case, and full-sized adults commented on the roominess of the rear.

Driving the XLT was also remarkably easy for a pickup truck, and my only complaint was that as I pulled into a perpendicular parking slot, I invariably pulled up as far as I dared, and then when I got out and checked, I was still three or four feet short of contact. After a few days, I learned that when you have the rear camera, you also get a front camera, but it doesn’t come on until you are very close to contact, then it gives you plenty of warning to help you park as close as you want.

While we’ve discussed for years the brilliantly devised F-150 pickup tailgate possibilities, it seems we need to revisit that, just because GMC and General Motors apparently are mounting a big ad campaign to show a unique breakthrough in tailgates — a fold-down step that allows easy access to climb into or out of the box.

Now, that’s very similar, if not identical, to the F-150’s tailgate, and I can’t believe that nobody at GM is aware that they are blatantly stealing Ford’s idea, and also claiming credit for inventing it! The Ford tailgate has been improved to fold down at a touch, and it drops down at a slowed rate. When down, you grasp the latch again and as you pull it, the top edge turns into a step and drops down, right where you can reach it with one step, and another step gets you into the box.

That’s not all. To the left of the now-exposed step is a bright yellow plastic tip, and you grasp it and pull it straight out, and there you have a long sturdy steel rod. Tilt it up and it locks in place, and pointing straight upward. You can easily grasp it as you climb a step, and it is the ultimate convenience to balance yourself as you climb in or out to get to stuff in the box.

Others, such as RAM, have cut a corner slot into the bumper, which is helpful because you can put your toe in there and climb up effectively, and others have tried to come up with their version of a climbing aid. But until now, nobody has copied it almost exactly and tried to claim, in national television ads, that they invented it.

All off its features and compelling list of truck ideas should assure the F-150 of keeping its position as the largest-selling vehicle in the nation. And now that it’s capable of letting you do office duties as well as pickup business should only expand its appeal.

Ford’s ability to put a potent hybrid of its own design into the pickup wars is the perfect stop-gap between gas engines and pure electric. Ford already is producing a pure electric F-150, to be introduced by the year’s end, but for many consumers, a good hybrid is a logical stopping off place on its way to an electric future.