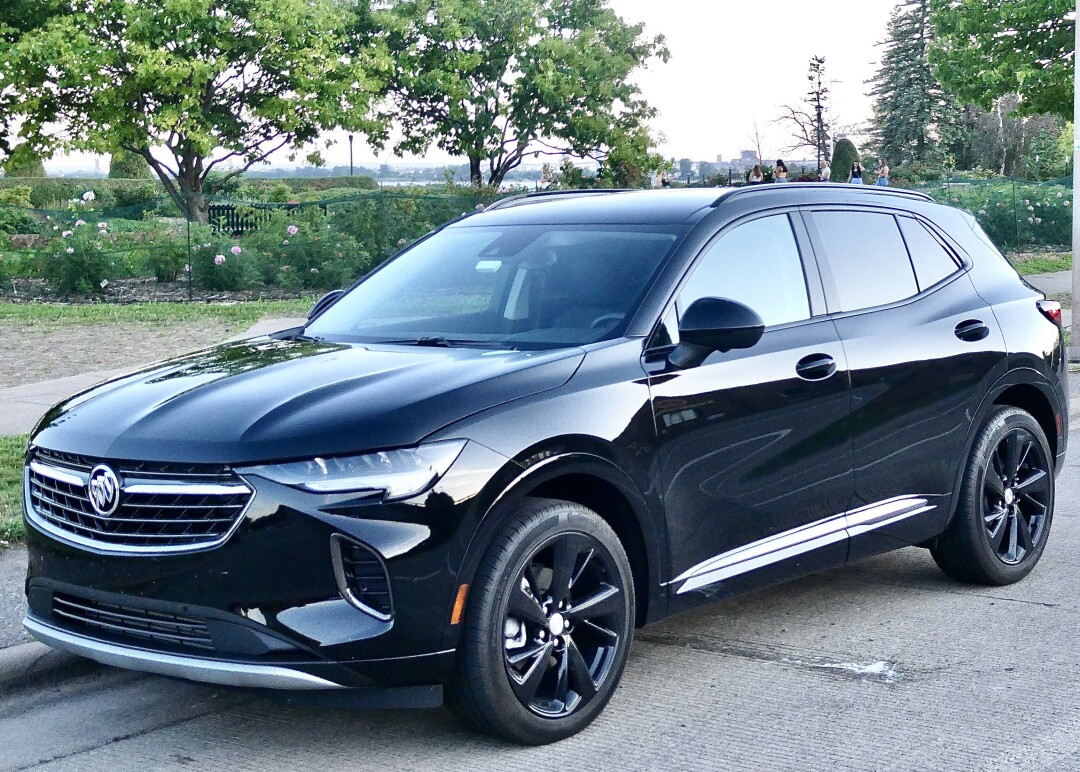 We went for a casual ride to downtown Duluth last weekend, and we decided to park the 2021 Buick Envision I was test-driving at the curb on London Road, so my wife, Joan, and our older son, Jack, and I could stop to smell the roses, so to speak.

One of the true treasures of Duluth is that Rose Garden, which spreads out across a couple blocks of parkland near Leif Erickson Park, from about 11th Avenue East to about 13th Avenue East. A stroll through the various clusters of roses and other flowers also affords you a stunning view of the Aerial Bridge and the westernmost tip of Lake Superior.

A major attraction of that garden is that the roses are almost all hybrids, in a mix and match gathering you simply can’t see anywhere else in the world.

When Buick brought out a new, somewhat compact wagon called the Envision five years ago, I found it to be surprisingly attractive and remarkably competent. It wasn’t world class or anything, but it was pretty neat.

For 2021, Buick has thoroughly redesigned the Envision, and our trip to the Rose Garden was pretty conclusive evidence that the car is, after all, world class.

After we spent a half-hour at sundown mingling with tourists and roses, we circled back to where the Envision was parked along the curb.

Joan walked up at first to a vehicle parked 50 feet behind the Envision, and Jack and she examined it alongside our Envision. It was a new BMW X5, one of the more impressive SUVs in a world full of SUVs.
We all looked over both of them strictly from a design standpoint, and we all agreed that the Buick Envision was the better looking of the two.

That may sound like heresy, but it is a comparison based on the overall similarity of the two, bolstered by the fact that a person could mistake one for the other. It appeared to be black from the outside, but a closer look at the many metallic highlights verified the “Ebony Twilight Metallic” identification.

The all-new Envision design has a quite-racy front end and a pleasingly attractive silhouette, plus a neat rear end as well. Inside, Jack drew rear-seat duty most of the time, but he never complained because it had supportive 60-40 bench seating and a lot of headroom and legroom. He did complain that the Bose 9-speaker premium audio system could use a more dynamic approach to rear sound.

The front buckets were also comfortably supportive, and while the Envision would not be mistaken for having sports-car handling, the ST model of the tester had an upgrade from 17-inch wheels to 20-inch black alloys, mounted with 245-45 R20 Continental tires.

There is a driving mode that allows you to select Tour, Sport or Snow/Ice, and we found it was not harsh in Sport, and it was a bit softer in Tour. I would like to compare, however, because generally, going to 20-inch wheels with lower profile tires can lead to rigidity next to more rubber between smaller wheels and the pavement.

The 2.0-liter turbo four was quick and substantial in all acceleration challenges, and the 9-speed automatic was a welcome presence compared to a CVT, and shift paddles on the leather-covered steering wheel added to the sportiness and flair.

The EPA estimates for fuel economy showed 24 city and 31 highway, and we recorded an average of 31.5 in combined city-highway driving – very impressive compared to other middle-and smaller SUVs.
The Envision should be ranked among SUVs, although it isn’t much of a stretch to consider it as a trendy station wagon with SUV tendencies.

Behind the fold-down second row of seats there is a surprisingly large storage area, and I must confess to a surprise that took me the full week to figure out. The first time I opened the hatch, I reached up for the remote switch to electrically close it, but nothing happened. I tried several times, and after finding no response, I pulled down on the hatch and it stubbornly closed, but not quite all the way. As I reached to force it to the final latching, it buzzed and latched itself.

I also asked Joan and Jack to try closing it but they found the same refusal of the push-button to activate it.

On the final morning in my possession, I was looking over the array of many buttons and switches and spotted a small button on the door, down below the various window switches. Looking closer, I saw it was a rotating switch that showed full, 3/4, and off, and it was switched to “off.”

Sure enough, when I rotated it and pushed it, the hatch opened p smoothly and efficiently. And also closed at a second push.

A lot of people are aware of the advances being made in design and quality by China’s auto-makers as that country surges toward incredible numbers of vehicles and drivers, and they wonder when a truly solid and competent Chinese vehicle will make inroads into the U.S. market.

The Envision is here to tell us all, China is here and has produced a solid, competent vehicle that you might mistake for any of a dozen competitive SUVs.

The surprise is that General Motors has been the anchor for U.S. vehicles for so many decades that we have to be surprised that the old slogan of “Buy American” might now include “Buy Chinese With an American name” slogan.

The price of the new Envision ST is $35,800 as a base price, and once you load it up with the Technology Package and the ST package it rises to $41,315. Those additions include a forward park assist, to augment the standard rear park assist, which is the auto-park system that you can see if you watch the ads for the Envision carefully on any Twins broadcast, or elsewhere.

The lane-keep assist, lane-departure warning, cross-traffic alert and blind-spot monitoring are all included standard as well, and all the connectivity devices are in place, too.
It is hard to envision, so to speak, all the standard stuff on a competitor for $35,000, or all the included equipment on the ST for $41,000.

One thing that is missing on the test vehicle is that its proper title adds the suffix “FWD” and not “AWD.” The tester was pulled along by front-wheel drive and did not have the all-wheel drive that I know is available. I have written often that if you’re going to get an SUV of any size and you live in the snow-belt area of Minnesota, you would be foolish to not get AWD.

Naturally, driving the new Envision in Northern Minnesota in this 90s-featured summertime makes AWD the farthest it could be from necessary, but we also know that winter is coming.

The hot summer makes air-conditioning more important, and it worked fine, even if it did take a half-mile to start throwing out chilly air. You fiddle with the switches and lower the temperature while raising the fan speed, and all of a sudden you are getting icy-cold air blowing too hard. But you can get used to setting it more moderately and driving the first half-mile to get the right blend.

We know that China has been fighting severe air-pollution for years, and we are getting it in Northern Minnesota this year from the numerous wildfires in Canada sharing their windblown smoke to choke us up. The Envision has a climate control switch that lets you activate an air-quality indicator, and an air ionizer. When the smoke was at its worst, we flipped on the ionizer and the air-conditioner at recirculation, and we were breathing cleaner air than anybody on the outside.

Meanwhile, the paddles help in hill-descent, and the stop-start, which is switchable, did a nice job of climbing Duluth’s many steep avenues. When you stop for even a brief stop sign halt, the stop start shuts down the engine but you are held in place. As you start up, it instantly re-engages and you’re off.

Maybe Buick is setting a good example for General Motors, beating the current chip shortage by expanding on the build capabilities in a country where those chips undoubtedly will come from. But all the right stuff is included on the Envision, which I must say is my favorite Buick model I have ever driven, or seen.

When you park in a shopping center lot, just be prepared for some long looks, and even for some folks to ask you what kind of car that is. Be nice, and don’t say “BMW.”

It’s time to spread the word in Buick’s favor.