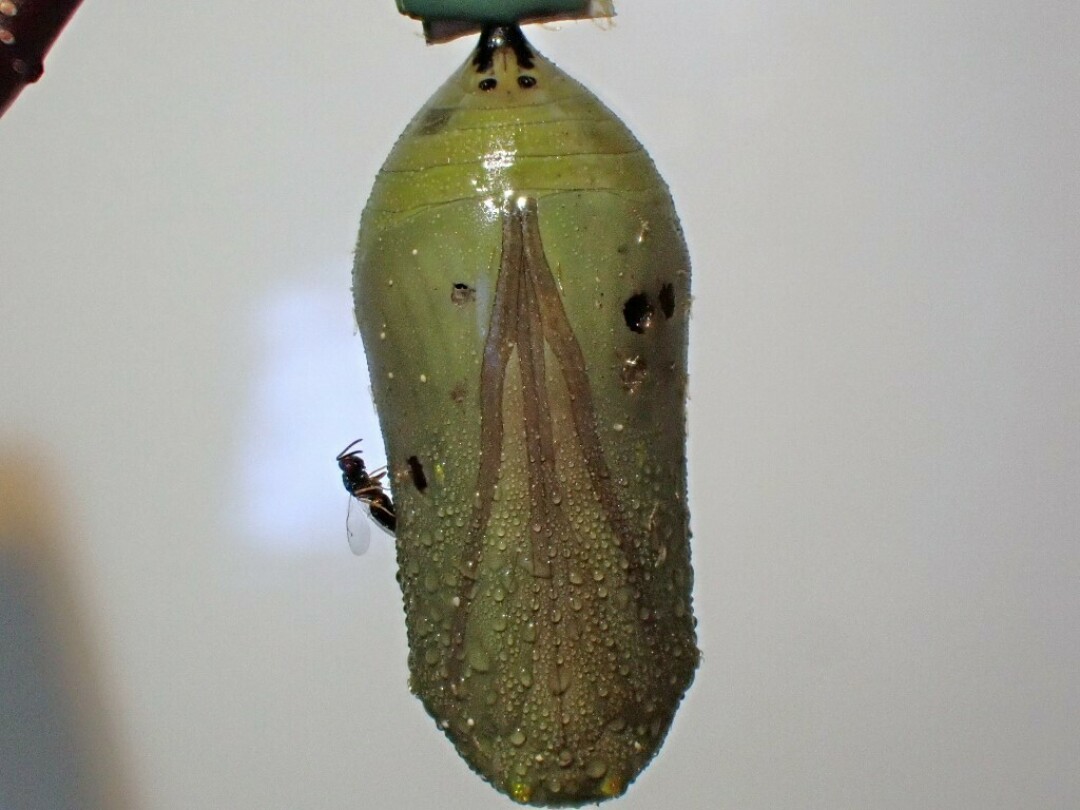 This monarch butterfly pupa, also known as a chrysalid, was parasitized by a tiny wasp. Photos by Emily Stone.

“Have you seen the newest monarch chrysalid?” asked my coworker Mollie, poking her head in my office door. My eyes lit up. While I counted 32 monarch butterfly caterpillars outside the Museum’s front doors earlier this summer, we’d only discovered the whereabouts of three chrysalids – the next stage in their life cycle.

Once monarch caterpillars get fat, they travel several feet away from the milkweed plants where they’d been gorging themselves and look for a good hiding spot.

Choosing a safe location to pupate is essential, and it’s a skill that they’ve developed over millennia. Caterpillars are immobile, soft, and vulnerable for about 24 hours as they attach their rear end to a leaf or other surface with a little silk pad, then curl into a J-shape and shed their exoskeleton to reveal the chrysalid. After the chrysalid has time to harden, they are a little more durable for the rest of the 8-15 days it takes for an orange and black butterfly to develop and emerge.

Mollie led me out the museum’s front doors and then turned immediately to her right. There, on the underside of a stone ledge on the building’s foundation hung a delicate, sea-green chrysalid.

Even though I’ve been admiring them all summer, I just can’t seem to get enough of the beauty and magic encapsulated in these Lilliputian packages. I leaned over to admire the gold dots shimmering on the pupa’s tiny ridges, and as I did, something small and black walked into view around the chrysalid’s shoulder.

The body had three segments, six legs, and two antennae. Was it an ant? No, there were tiny, translucent wings. This critter gave me a bad feeling, and using a pen I tried to shoo the little one off the chrysalid. It didn’t budge. Then the docent at the front desk got our attention to answer a question, and Mollie and I headed back inside.

The little visitor niggled at my conscience, though, so I did some Googling. As I feared, the critter looked just like a tiny wasp who has recently come to light as a parasite on monarch pupae.

Pteromalus cassotis is one of many types of Chalcid wasps who each specialize in parasitizing their own flavor of insect.

Entomologists hypothesize that pretty much every species of insect, plus many plants, are parasitized by one or a few species of wasps who are specific to their host. Logically, it follows that there are likely more species of wasps on Earth than any other animal. Most of them have not yet been described by scientists.

And actually, it would be nice if they were only parasitizing the insects. Parasites steal energy from their host but don’t always kill them.

Insects who make plant galls are parasites. They hurt the plant, but not to the point of death.
In contrast, P. casspotis and other Chalcid wasps are parasitoids, which means that they have a catastrophically cozy relationship with their host that results in the hosts’ death.

With this sad knowledge, I took a closer look at the monarch chrysalid a week or so later. Odd, dark blotches showing through the translucent green case confirmed that it was not developing normally.

I was still curious, though. Carl Stenoien, a PhD student at the University of Minnesota, only confirmed the wasp’s relationship with monarchs as recently as 2015, while working with Karen Oberhauser at UMN’s Monarch Lab. I wanted to see this phenomenon for myself.

So, I carefully scraped the silk button off the concrete and taped it to a small stick. Then I set the stick and the dangling chrysalid inside a glass jar with cloth in place of the lid, and placed it on a back corner of my desk. 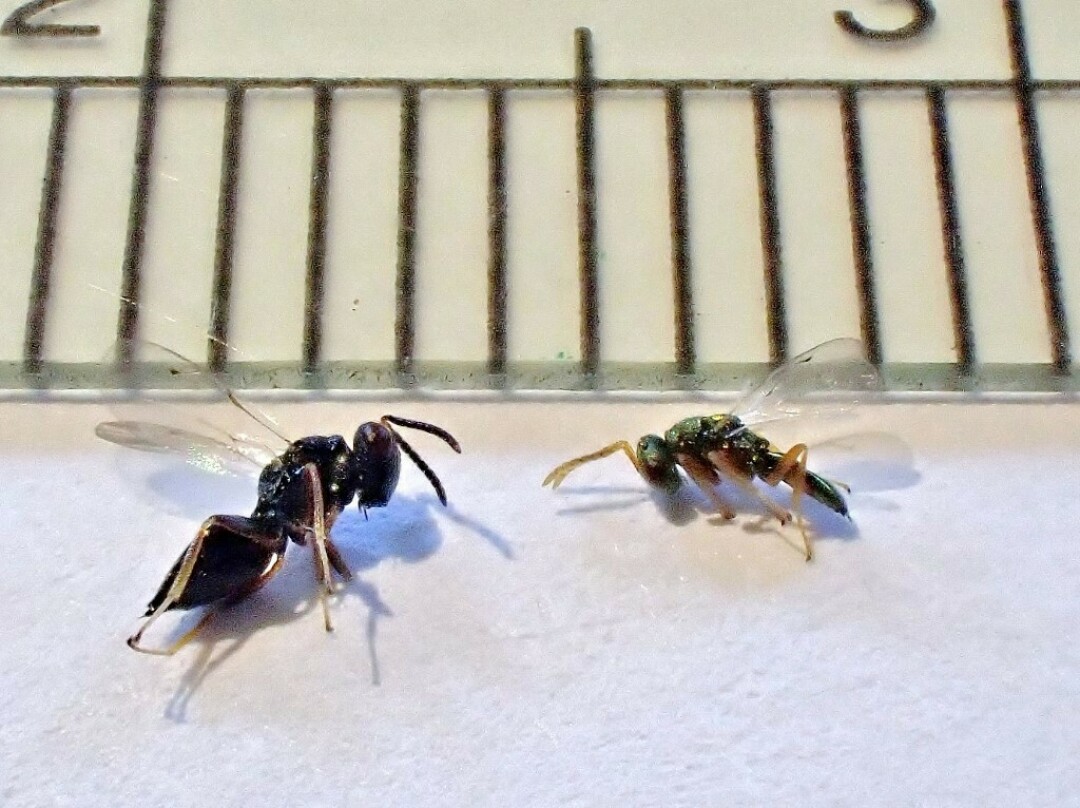 Pteromalus cassotis is a species of parasitoid wasp that attacks only the pupae of monarch butterflies. The larger individual on the left is female, and the smaller one is male. The lines are millimeters.

About a week later, I looked up from emails and noticed movement in the jar. Hundreds of tiny wasps had appeared.

According to Stenoien’s research, anywhere from 1 to 425 wasps might emerge from a single chrysalid – all raised on energy stolen from the monarch pupa.

Most of them are larger, black females, and as few as nine percent are the smaller, bronze-colored males. I could see the variation of color and size in the wasps crawling around my jar. With their big red eyes, elegant, teardrop-shaped abdomens (no pointy stinger, just an ovipositor used for laying eggs), and tan legs, these little ladies were almost pretty.

While the population of monarch butterflies has declined by an alarming 80 percent in the last decade, natural enemies like these tiny little wasps are probably not a significant part of their demise. Human-caused issues, such as habitat loss, pesticide and herbicide use, and climate change are much more significant issues.

Still, it would be easy to frame these little parasitoid wasps as villains, since they attack a beautiful, charismatic butterfly – but nature is not that simple.

Those uncountable species of parasitoid wasps do us a favor by killing insects who cause crop damage. They also help keep wild nature in balance.

There is such a thing as a world with too many caterpillars – at least in the opinion of the plants who those caterpillars eat, and the other herbivores who might also need those plants, and the animals who need to eat those herbivores, and so on up the food chain.

Whew! That was quite a journey. By simply going outside to look at something pretty, I ended up reminding myself that even the smallest critters have important roles to play on Earth.

I’m a lot bigger than those wasps. What does that say about the impact I could have?

Emily M. Stone is Naturalist/Education Director at the Cable Natural History Museum. Her award-winning second book, Natural Connections: Dreaming of an Elfin Skimmer, is now available to purchase at cablemuseum.org/books and at your local independent bookstore, too.