A cult for all time 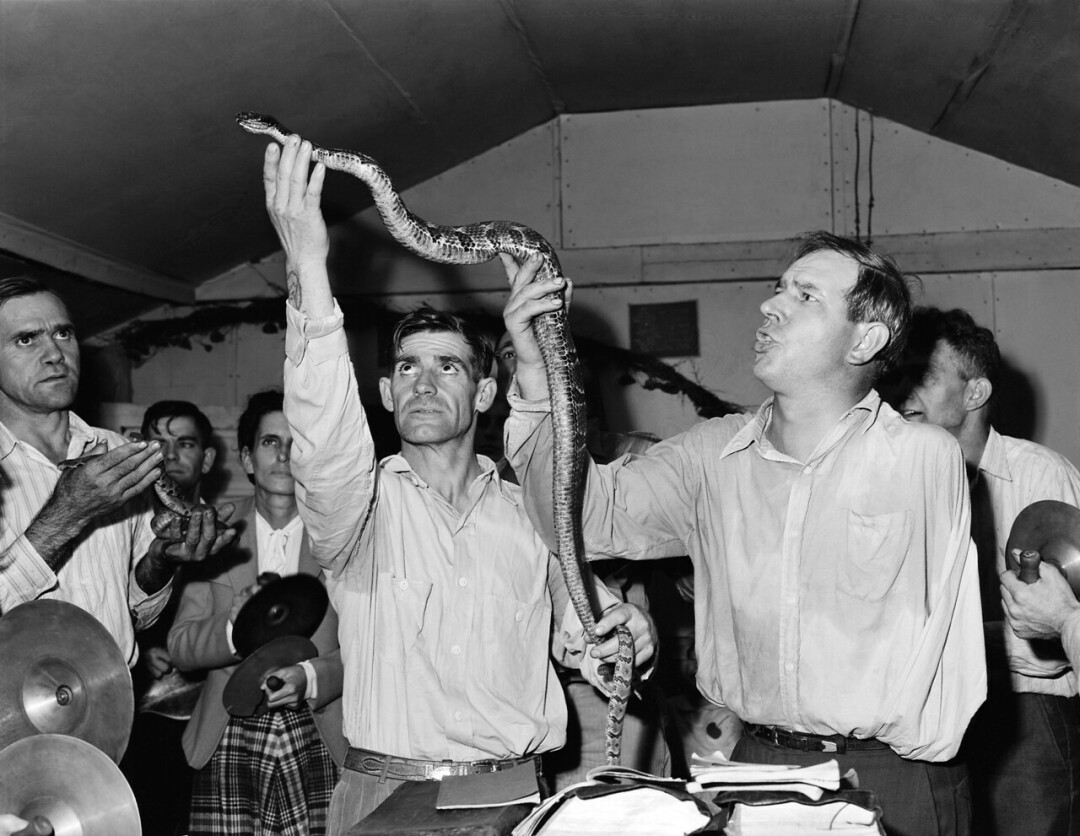 Handling serpents at the Pentecostal Church of God. Lejunior, Harlan County, Kentucky, on Sept. 15, 1946. The pastor, Eli Sanders, the one-armed man at right, died from a snake bite suffered during the ritual use of snakes in September 1958.

There are hundreds of thousands of cults in countries and societies around the world that have played or are playing a role in the formation or disintegration of a group or government.

Therefore, the definition of a cult has to be quite broad: A cult is a group of people with extreme dedication to a certain leader or sets of beliefs that are often viewed as odd by others, or is an excessive and misplaced admiration for someone or something, or is something that is popular among a certain segment of society.

It may also be a group of people with a religious, philosophical or cultural identity sometimes viewed as a sect, often existing on the margins of society or exploitive toward its members. There are quite a number of religious cults that may express reverence, religious ceremony and ritual. There are cults that share esoteric, artistic or intellectual interests.

There are cults with a dozen or millions of members.

One of the smallest cults in the Divided States was the Manson Family, a California commune formed by Charles Manson that committed nine murders in an attempt to start an apocalyptic racial war in 1969. Manson and several members were sentenced to prison for the murders.

As a representative of the macabre, violence, and insanity, Manson was sentenced to death but later was commuted to life imprisonment with the possibility of parole. His parole hearings always made the daily news. He died in prison in 2017. Charlie’s cult is covered in the book Helter Skelter.

What is the difference between a religion and a cult?

Most historians will say it is time – and if the cult has survived its founder and leader for a “respectful time.”

Mormonism has been called a cult by many, but founder Joseph Smith was lynched in 1844 and now has more than 14 million followers in the world.

The Tennessee Snake Handlers have passed muster as a religion and certainly have passed on thousands of members to the Trump Cult. The founder was a minister who wrapped poisonous snakes around his neck while doing a two-step shuffle dance to religious hymns.

At one time there were at least 125 Pentecostal churches in six Appalachian states that followed these literal lines in the Bible: “They shall take up serpents; and they drink any deadly thing, it shall not hurt them, they shall lay their hands on the sick, and they shall recover.”

There are no records of how many men have died from the bites of timber rattler, copperhead, diamondback, rattle, cottonmouth, and even imported cobra snakes. The Snake Handlers believe the word of God and preach the gospel to send all demons packing while speaking in unknown tongues and curing people of diseases by laying on of hands.

There are no records of women ever tossing snakes to each other, wrapping big diamondbacks around the neck, or drinking poison, but they do provide the music and speak in tongues.
In 2014 when a famous Snake Handler died of a timber rattler’s bite, the occasion made national news because he had rejected all medical intervention to “prove his faith.”

Many cults have never reached the status of being a religion

My favorite cult so far is Heavensgate, founded in San Diego in 1972 by Marshall Applegate and Bonnie Nettles. The cult formed because they learned aliens flying in the Hale-Bopp comet’s tail would pick them up with a spacecraft and take them to the “Kingdom of Heaven.”

The members gave up all of their worldly belongings. Eighteen men and 21 women dressed in black tunics and Nikes, ate applesauce (Get it? Applegate!) drowned in a drug and vodka were later found in their single beds in a building very dead. In that the cult members had pledged celibacy, nine of the men had been surgically castrated. (No word about the other nine!)

Evidently the spacecraft never made it to planet Earth. A very upbeat videotape message from all 39 members was found at the death scene, indicating they were willing and happy to die and move so dramatically to the next level, the gate to The Kingdom of Heaven. If there was a religion, it died with Applegate.

Another religious cult died in 1978 when 909 members died of drinking cyanide-laced Kool-Aid but created the long-lasting phrase “Drinking the Kool-Aid” which is used every day by a journalist or politician describing our current situation.

Founded in 1955 by Jim Jones, a charismatic Indiana Christian minister who advocated liberal issues such as civil rights, treatment of the elderly, and mental health, he moved his People’s Temple to California in 1965.

His cult was concerned with surviving a nuclear war, so the group leased land in South America’s Guyana and formed an agricultural commune combined with an armed camp.

In 1978 California Congressman Leo Ryan and aides traveled to Guyana to investigate charges that Jones was rehearsing commune members to commit mass suicides. When Ryan and his aides landed in Jonestown, Ryan and four others were killed. Jones ordered all cult members to drink the Kool-Aid. Jones shot himself in the head. The scenes were quite shocking to relatives, Americans and the world.

Vernon the Chosen One lands in Waco and has gone wacko!

In 1959 an extremist branch of the Seventh Day Adventists known as the Branch Davidians gathered at their compound Mount Carmel Center near Waco, Texas, to experience an apocalyptic end of the world witnessed by the Messiah.

Well, as you know, it didn’t happen.

In 1981 an earnest young man in his 20s named Vernon Howell arrived to study biblical prophecies under the guidance and tutelage of Lois Roden, the leader of Mount Carmel, in her late 60s.

Vernon had a sexual affair with her, claiming he wanted to have a child with her who would then be known as The Chosen One. He later actually became The Chosen One and was declared the cult’s leader.
He named himself David after King David (the rapist of Bathsheba), with the last name Koresh after Cyrus the Great (Koresh is the Hebrew version of the name Cyrus):

As he gained power within the Branch, David Koresh declared he had sexual rights to any female at Mount Carmel, including children, wives and strays. He was truly The Chosen One for all.
Not only did he get in trouble with local authorities for sexual abuse, he also got the attention of the FBI and the Bureau of Alcohol, Tobacco and Firearms by arming the compound with automatic and semi-automatic rifles and shotguns.

When a search warrant was served a little war broke out with ATF officers and Branch Davidians killed by firearms. To make a long, interesting story short, in the final siege of Mount Carmel. 79 of the 85 members died by gunfire or by a fire that destroyed the compound in a 40-mile-an-hour wind. Some of the video is amazing.

Members of Amy Carlson’s Love Has Won cult are grieving her recent death in a Colorado-based cult.
She claimed two amazing things. She had created all life on earth previously claimed by somebody else, and claimed she was Donald Trump’s daughter in a previous life. I suspect her cult might have died after her last life, but the new Chosen One has not said anything about fathering her.

Will the Trump Cult live on as a religion or political party?

How many million are members of his cult is quite difficult to estimate. How many greedy millionaires and billionaires voted for him because of wallet biopsies?

How many “Christians” voted for him because they believe Blacks were created by God to serve Whites?
How many Oath Keepers, Three Percenters, Proud Boys, Boogaloos and thousands of other anti-government militia members voted for Trump so they could make their fortunes off natural resources on Western federal lands?

Did you vote for Trump because you believed in the Montana Freemen and Gordon Kahl’s Posse Comitatus? How many members of other alt-right cults such as QAnon switched their membership to vote for Trump?

How many pussy-grabbing, knuckle-dragging Neanderthals voted for Trump?

How many desperate farmers afraid of losing their land and angry unemployed union members seeing their good-paying jobs moving to Mexico and China voted for Trump?

How many long-time Democrats voted for Trump because the Democratic Party did not adopt Bernie’s liberal agenda of protecting union jobs and wages?

How many pro-life anti-abortion Roman Catholics voted for Trump?

How many voted for Trump after he mocked a reporter’s physical liabilities?

How many Fox News viewers failed to vote for Trump?

Reporter Michael Bender of the Wall Street Journal wrote about the 56-year-old in his book Frankly, We Did Win This Election: The Inside Story of How Trump Lost. She is atypical because she has no greater love, but I’m sure she has qualities that are present in millions of Trump Cult members.

For the love of Trump she has attended 56 Trump rallies so far, 25 in 2020 during his campaign, spending 79 days out of her bed in that year. She became well-known to Delta flight attendants.

On Jan. 6 she tried to enter the Capitol but ended up 100 yards from the doors because the grounds were so crowded with Trump supporters.

She has described Trump’s loss as “a takeover by the communist devils. If someone put a gun to my head and said: ‘Did Trump win, yes or no? And if you’re wrong, we’re going to shoot your head off! I would say yes. I’m that confident that this stuff is not made up.”

A Trump campaign aide told her that he had really won the election but had lost it due to “ massive election fraud.”

So what if Liz Cheney says Trump is “a clear and present danger” to democracy?

So what if Pentagon generals said they kept the nuclear codes from him?

So what if Mike Pompeo thought Trump might start a war after he lost the election? He said: “The crazies (White House) have taken over!”

So what if The Chosen One had no interest in government, did not read or listen to briefings, spent inordinate amounts of time watching Fox News, Newsmax and One America News Network, fired aides if they told him bad news, and often communed with his best buddy, The Pillow Man? So what if he wouldn’t wear a mask and thought drinking bleach would be the cure for COVID-19? So what if he told a Huuuge Lie and 30,000 medium lies? So what if he carried a borrowed Bible in public? So what if about 60 women are accusing or suing him for rape or sexual harassment?

He sure makes a great cult leader!