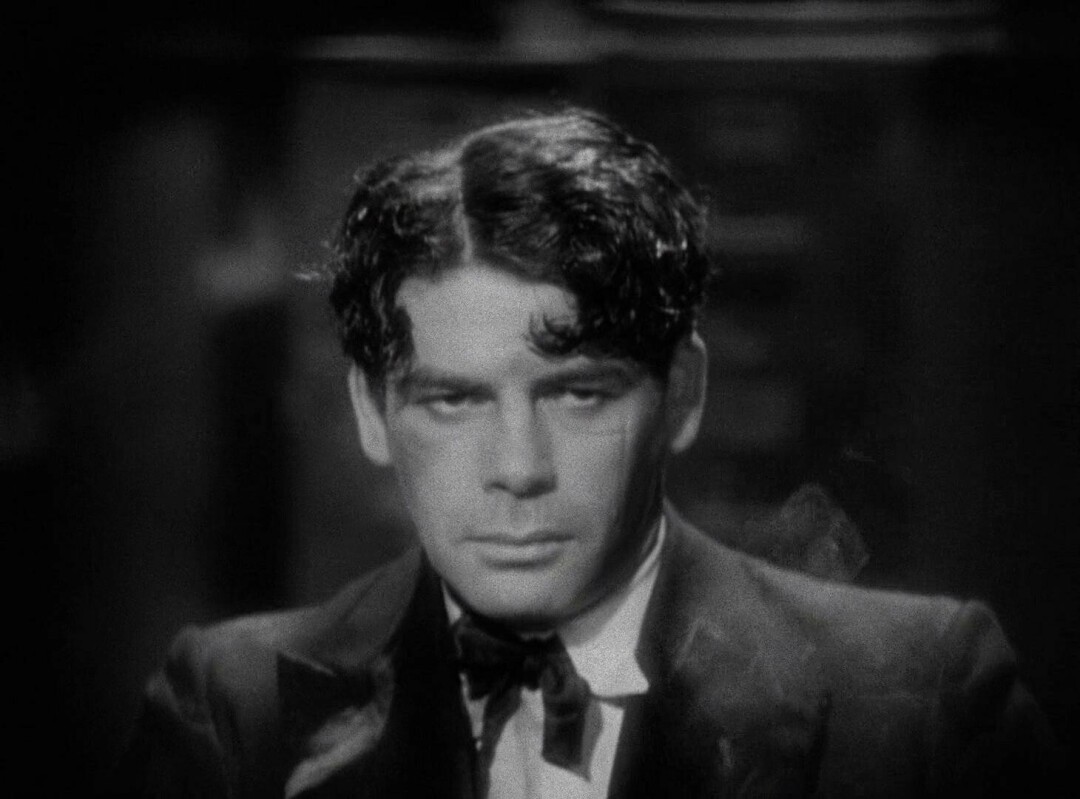 Paul Muni in Howard Hawks’ 1932 Scarface. Al Capone was already in prison for tax evasion when this cautionary movie loosely based on his Chicago exploits was released.

The great Franz Lizst is about to play at a grand party. He asks that the lights be turned down. Powerful piano music ensues.

The camera pans through the room to different groups enraptured by the music the pianist is producing. The lights come up thanks to George Sand with a candelabra, only to reveal the upstart Frederic Chopin, who is introduced by Lizst as “one of the greatest artists of all time.”

It’s a beautiful movie moment in a collection of films on the Criterion Channel featuring that great Everyman actor, Muni Weisenfreund – aka Paul Muni.
H

owever, in this 1945 Technicolor musical extravaganza called A Song to Remember, even though Muni and Merle Oberon as George Sand get top billing, it is a young Cornel Wilde who plays Chopin. Muni is his mutton-chopped teacher, Professor Jozef Elsner.

Nominated for five Best Actor Academy Awards in a 30-year film career that began with The Valiant (1929) and ended with The Last Angry Man (1957), Muni built a career on being able to play Everyman as well as very specific characters in a series of biopics that you could say began in 1932 with Scarface (Al Capone), and on to Louis Pasteur, Emile Zola and Professor Jozef Elsner, Chopin’s teacher.

Muni’s acting career began on stage, first with Yiddish theater, and then on Broadway before defecting to Hollywood.

His first starring role in The Valiant netted him his first Oscar nomination. Three years later he shot to superstardom in the movie that kicks off Criterion’s Muni collection, Scarface.

Directed by Howard Hawks (who grew up in Neenah, Wis., where his grandfather owned the Howard Paper Mill), Scarface has a great pedigree.

A guy by the name of Maurice R. Coons – writing under the pen name Armitage Trail – wrote a novel in 1929 that was based on the life of Chicago gangster Al Capone. He titled his book after Capone’s supposed nickname, Scarface, due to a knife scar on his cheek.

Millionaire weirdo Howard Hughes bought the rights to the book, and he picked former Chicago newspaperman and veteran top-notch screenwriter Ben Hecht (including the best newspaper movie ever made, The Front Page, which was also produced by Hughes) to write the screenplay, and Howard Hawks, with 10 features already under his belt, including his wildly popular Dawn Patrol (1930), to direct.

The actual title is Scarface, the Shame of a Nation. A written prologue tells us this is an indictment of gang rule and the government for allowing the true incidents depicted in the film from being carried out by the Prohibition-era gangster movement, which was about to come to a quick end the next year when Prohibition was wisely ended (well, if not exactly to an end, forcing gangsters to either go underground or corporate).

Our first look at Muni, he’s getting a facial in a barbershop. A cop comes in, the towel is pulled from his scowling puss and we get a good look at the titular scar on his left cheek before we know who he is, but in one look the scar and the menacing scowl Morse codes to our brains his whole miserable life story. Muni had the ability to convey that much detail with a look.

George Raft, my least favorite Warner Bros. star, co-stars. Raft always seems like he’s doing the movie a big favor by showing up, but he doesn’t expend too much energy to keep you interested. Here, he’s got a bit more depth, and this is where the oft-repeated image of him flipping a coin originated (years later, even he parodied the coin-flipping routine in Billy Wilder’s Some Like It Hot).

Universal horror star Boris Karloff, who the previous year had cemented his place in the horror hall of fame by portraying Frankenstein’s monster and would outdo himself at Universal this same year as The Mummy, has a great death scene.

There’s one scene in particular that made me wonder how many times Al Pacino watched this movie before portraying Brian DePalma’s Scarface 50 years later. It’s the scene showing that Muni’s character, Tony Comante, is the enforcer. We’ve already seen his shadow murder the old mob boss. The new boss comes in, notices a couple of guys are missing and asks about them.

“They said you could take a…” one of the mugs says.

The mug who said that to the boss tries to leave. Muni punches him in the nuts and then slugs him in the head to the floor, picks him up, sits him in a chair and tells him not to interrupt the president.

Yeah, I can’t even imagine how audiences in 1932 reacted to seeing this new kind of violent anti-hero on the screen.

“Listen you! What kinda mug do ya think I am?” Tony/Muni says at one point, and it is a very good question. We have not seen this fellow’s like before. 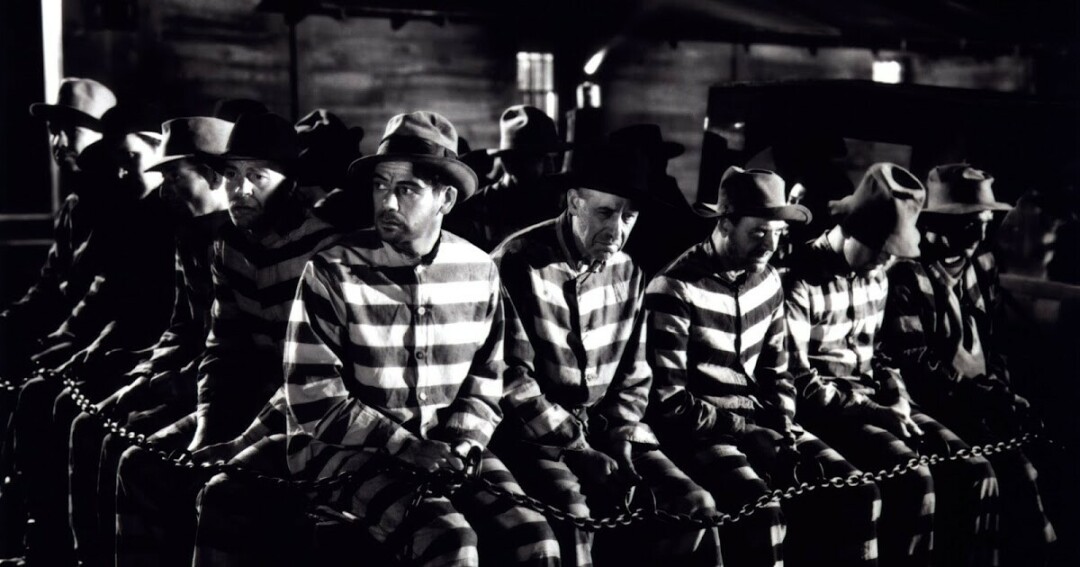 Paul Muni as a wrongly convicted man in Mervyn LeRoy’s 1932 I Was a Fugitive from a Chain Gang.

Hecht and Hawkes collaborated on the screenplay. The Borgias were their inspiration for Tony and his family. Was there an incestuous relationship between Tony and his younger sister Francesca? Tony kills his pal Raft in jealous rage, not knowing that Raft had secretly married Tony’s sister.
But it was more about the violence that got the movie banned in so many places that caused Hughes to remove it from circulation. It remained in his vault until his death in 1976.

Also in 1932 Muni made another classic of the crime genre, I Am a Fugitive from a Chain Gang, directed by Mervyn LeRoy, and based on the true story of Robert Elliott Burns, who did time in a George chain gang.

To prepare for the role, Muni met with Burns, famously telling him, “I don’t want to imitate you; I want to be you.”

And that is probably the very essence of Muni with every role he played.

The Muni collection on Criterion includes: Black Fury, 1935, directed by Michael Curtiz. Muni stars as Joe Radek, a not-very-bright coal miner who first loses his girl then his self respect, before becoming a labor agitator; The Story of Louis Pasteur, 1936, directed by William Dieterle, and the movie that earned Muni his only Oscar; The Life of Emile Zola, 1937, also by Dieterle; Commandos Strike at Dawn, 1942, a wartime drama has Muni starring as a proud Norwegian who fights against Nazi invaders in his community; A Song to Remember, 1945; The Last Angry Man, 1957, directed by Daniel Mann.

I think I first saw Muni in a movie that surprises me not to be in this lineup – the fun fantasy film Angel On My Shoulder (1946), starring Muni as a tough guy gangster gunned down by a pal and sent back to Earth on a mission by “Nick” (Claude Rains).

However, if you have time for only one of these Paul Muni films, I would recommend The Life of Emile Zola because it is Hollywood at its best with a historical biopic.

“Truth is on the march, and nothing will stop it!” is its theme.

This movie was made for Warner Bros. in 1937, directed by German emigre William Dieterle. While the bulk of this almost two-hour film is devoted to the 1894 Dreyfus Affair and Zola’s resolution of it, not once does the evil specter of anti-semitism raise its head in the depiction of the affair, although it was very much present in the wrongful prosecution of French Army Capt. Alfred Dreyfus on a charge of treason.

By 1937, Hollywood was certainly aware of the atrocities that had been happening since Hitler’s rise to power in 1933, but war wasn’t yet in the cards. This movie would have been a perfect vehicle for pointing a finger at what was unfolding in real time in Germany, but there is no such emphasis.

Still, it is a beautifully made movie, and you absolutely find yourself hating the evil bastards in the French army who send Dreyfus to prison on Devil’s Island, knowing full well that he is innocent and that one of their elite members is the real spy.

They do not make movies like this anymore. It was nominated for 10 Academy Awards and won Best Picture and Best Supporting actor for Joseph Schildkraut, who played Alfred Dreyfus with quiet dignity.
Muni and Dieterle made three biopics together, the final one after Pasteur and Zola being the 1939 Juarez, with Muni starring as Mexico’s first indigenous president, Benito Juarez. Woonder why that was not included in this lineup?

Dieterle’s next movie after Juarez was The Hunchback of Notre Dame with Charles Laughton, and in 1941 he made one of my all-time favorite films, The Devil and Daniel Webster, starring the great Walter Huston, father of director/actor John Huston, and Edward Arnold as the titular characters.