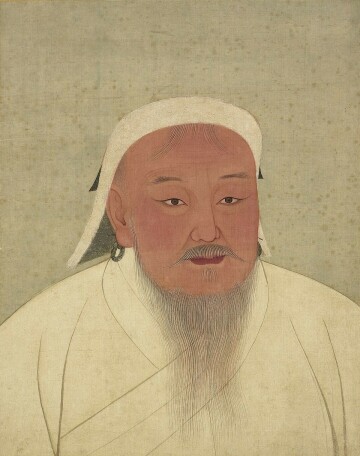 In the 13th century Genghis Khan of Mongolia ruled the largest empire the world has ever seen: from the Pacific Ocean to the borders of Europe and from Northern Siberia to Southern Persia. His government, known as The Golden Horde, took in many countries, including present-day China, Mongolia, Russia, Afghanistan, Persia, Hungary, Turkey, and all of Central Asia.

To govern it well, Genghis established the longest postal routes in history covered by Mongol ponies, some more than 5,000 miles. Horses were the lifeblood of the empire. They could sprint for hours, pulled heavy carts, carried troops into battle, and pawed through the snows in the north to feed on grass. Sometimes it took three months to deliver a letter from posthouses stretching across the entire empire.

The shocking thing about Genghis Khan and his sons and grandsons who ruled later was that they were true socialists. The Mongols had a tradition of sharing everything: taxes, plunder, acquired wealth, horses, carts, and materials. Luxuries and necessaries had to be circulated and shared. It was a spiritual necessity. Sharing enhanced the well-being of everyone and made the afterlife better for the donor. Hoarding was a great sin.

One of Genghis’ sons declared: “There is no difference between buried treasure and dust.”
There was no voter suppression or insurrections. There were no campaigns or voting booths. Genghis was a dictator-socialist!

The Mongol empire lasted more than two centuries and was never defeated by another empire. A pandemic called the Black Death by the bacterium Yersinia pestis moving from fleas to rodents killed about one-third of the population of Europe. Now known as the Black Plague because of black nodules, the disease destroyed trade between East and West. All of the trade routes were turned into plague routes.

Bernie Sanders has the same goals as Genghis: Equality and sharing

Bernie is the most important politician in Washington these days – and he doesn’t even belong to the Democratic Party. He and others call him a Democratic- Socialist, but he has been elected for decades as just a Socialist.

It’s fascinating that two leaders 800 years apart have the same policies and traditions of sharing everything within their societies. It’s a quirk of history that Bernie and his wife celebrated their honeymoon in Russia and Moscow in the 20th century, and Genghis Khan and his wife and army raided Russia and Moscow in the 13th century, plundered a lot of stuff, and shared it with the people of Mongolia.

And what is the platform of Joe Biden and the Democrats in 2021?

It is based on the sharing of the wealth among all members of American society proposed by Bernie Sanders, a Democratic-Socialist, not a Democratic-Capitalist. Poor Joe Biden, harassed by Donald Jesus Trump and Joe Manchin who each have only one political interest, the political survival of Donald Trump and Joe Manchin, wants everything to go back to “normal” when going back would be a bonanza for billionaires and an absolute disaster for workers.

Bernie wants to solve the real problems of what we are facing in the 21st century: a demoralizing and corrupt “finest health care system in the world,” inadequate funding of pre-k-12 education, abysmal college funding, exploding student debt of 44 million debtors, denial of climate change, the anti-science, anti-regulation policies of the Trumplican Party, the severest income inequality in the industrialized world, legal and illegal racial discrimination, unequal justice, the proliferation of Second Amendment sanctuaries and the gun culture, the lack of firearm controls, anti-LBGTQ+ legislation, debilitating homelessness, the propaganda of Fox News and the social media, the high price of drugs, the collapse of our infrastructure, the unfair tax structure and the inept IRS, and why half the households in the Divided States of America are living paycheck to paycheck. And he still wants to pass his Medicare-for-All plan.

Bernie also retains his disgust for billionaires and their obscene toys: “You have the richest guys in the world who are not particularly worried about earth anymore.”

They seem to be going to outer space where their money is not worth as much. What’s a billionaire going to buy on Mars? A Mars bar?

The English newspaper The Guardian tells us real facts while American newspapers owned by wealthy corporations often give us alternative facts to serve their masters. Hamilton Nolan of The Guardian covered the annual Sun Valley “summer camp” of our controlling billionaires while it was difficult to get a few sentences out of the New York Times or The Washington Post about the most important American economic summit meeting of the year.

Like the world-wide Davos meeting in Switzerland, it’s where billion-dollar deals are made and planning is set to control the economy for years for the benefit of the 700 billionaires who run the country.

Nolan’s summary of the summer camp schedule: “Here America’s wealthiest mega-billionaires gather with the chief executive of America’s most powerful companies, the director of the CIA, and America’s most worthless journalists to develop the social and business connections that allow 0.00001% of earners to continue to accumulate a share of our nation’s wealth that already exceeds the famously cartoonish inequality of the Gilded Age of Rockefeller and Carnegie. Everything that happens at Sun Valley will contribute to the ability of attendees like Jeff Bezos, Bill Gates, and Mike Bloomberg (add Elon Musk) to increase their society-warping fortunes. They and their fellow billionaires got more than 50% richer during the pandemic year, by doing absolutely nothing but sitting back and watching their capital grow as millions around the world suffered and died. Their power over the course of the country grows ever more unassailable and unaccountable to anything other than their own whims. We are developing a private class of billionaire kings whose will is omnipotent and untouchable by any democratic force. It is, by any reasonable measure, a threat to the long-term stability of our country that far exceeds anything the Taliban could ever dream up.”

This paragraph says it all.

But Nolan adds a couple of sentences: “In 2022, the billionaires will return to Sun Valley. By then, they will almost certainly be richer, and more powerful, and control an even more grotesque share of the fruits of everyone’s labor.”

Is Jeff Bezos the happiest person in the world?

Most of the people attempting to answer this intriguing question are mental health experts who are not millionaires or billionaires, but most of them state emphatically that $95,000 is about at the limit of income that would make people happier. Many research studies suggest this is true.

As an example, researchers quest-ioned the employees of Netscape, who suddenly became millionaires in 1995 when the company went public. Life immediately changed for many. Many lost friends because they started to run in different social systems. Jealousy was rampant while McMansions changed lifestyles. The only people who would share their lives were others who had suffered instant wealth.

Meanwhile, most of the superrich realize they have become targets because of their wealth. Money creates more money, and paranoia creates more paranoia.

Are all these security guards we have hired loyal to us? Do we have to hire nannies for the children who have been trained in personal combat and self-defense? Really? Do we have to conceal where we are going on vacation? Our security manager is insisting we add safe rooms with magnetized locks, good communications equipment, bomb-resistant doors, fortified walk-in closets with gun ports, and blast-proof Kevlar plating that can stop high muzzle velocity rifle fire to our mansion. Will our private jet be safe at the airport? Should we buy a survival apartment in an old missile silo out in Kansas that has been remodeled as a safe house?

Is that billionaire right that the purpose of the police in the Divided States is to keep poor people away from rich people? Makes sense to me.

Bezos and Musk, the two richest men in the world, have legally not paid any income taxes several times in the last decade.

Maybe the Best Congress Money Can Buy might look at the difference in IRS regulations, rules and rates some day.

Bill Veeck, former owner of the Chicago White Sox, wrote in his memoir: “Team owners won a tax-write-off that could have been figured out by a Texas oilman. It was figured out by a Chicago hustler. Me.”

All citizens should recognize by now that the Divided States of America were not ready to face the disaster of COVID-19 and 600,000 deaths because we had no worker safety net. Workers actually make all that money for billionaires. Then they hide profits in tax havens in this country and around the world, and pay taxes at a lower rate than their maids and drivers because they made the rules and regulations!

There are still tens of millions of American households that haven’t recovered from the Bush Great Recession of 2007 where millions lost their homes to Wall Street greed. Nearly 50% of Americans were living paycheck to paycheck before the pandemic hit.

The Federal Reserve even reported that more than 40% of households did not have enough savings to cover a $400 emergency. That’s a cheap set of tires or a plugged radiator.

One thing about Genghis. He did not build castles with drawbridges and moats, pyramids as tombstones, or huge temples in jungles for himself. The dictator-socialist who ruled the largest empire lived in tents called yurts and traveled on horseback.