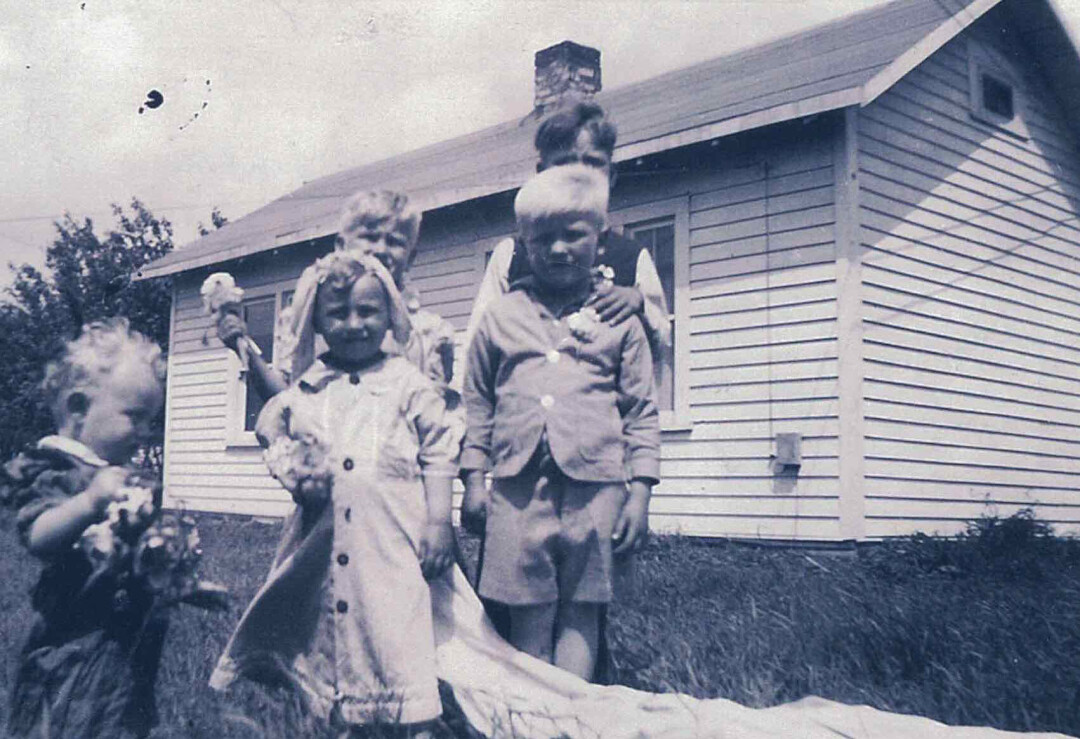 When I was a baby, they put me in a buggy with my cousin Joan, two months older than me. She promptly stole my bottle and became the first in a long line of women that bullied me.

You may often read about how women today are always treated as though they are inferior to men and we need to do something about that. The attached photo of my first wedding is proof that this was not always the case. I am the “bride,” cousin Richard is the “groom,” cousin Duke is my “maid of honor,” and neighbor Jack Mullen is the “best man.” Cousin Don is the flower girl. NOT shown in this picture are Richard’s older sister Betty Lou, Duke’s older sister Alice and Jack’s older sister Margaret.

There was no such thing as TV then, of course. The girls could find nothing better to do than to embarrass their little brothers. My cousins Richard and Duke were only a couple of years older than me, but Jack was five years older and undoubtedly this is why his face is not showing.

During weeknights, I could listen to the radio with my favorite shows: Red Skelton, Bob Hope, Bergen and McCarthy, Jack Benny and Burns and Allen. On weekends, we could occasionally pick up the “Grand Ole Opry,” it was more normally just static.

Saturday nights in the summer, kids from all over the neighborhood would start to gather around the streetlight on the corner of Selmser Avenue and 22nd Street by Bodie’s Store. With gas being rationed there were seldom any cars going by, so we might start a game of “Kick the Can” in the street, or we might move to Ivar Wagtskjold’s lawn on the other side of Selmser for “Simon Says,” or play Hide and Seek around Ivar’s house and Bodie’s store. Ivar was a large man with a Walrus mustache. I know he had a couple of boys my father’s age, but they didn’t live with him any more. He never once came out to holler at us to get off his lawn. He was in his 80s then, I’m sure, so I don’t know if he didn’t hear us or he didn’t care.

There were several games to choose from, but the night’s game was usually arrived at democratically, unless Marcia Kahn showed up. She was a couple of years older and tended to be bossy. That didn’t worry us, but through whispered conversations we decided to play it safe. Marcia had an older brother Gene, who was both big and TOUGH. We didn’t know how upset Gene would be if his sister had a problem with us, so we would play the game Marcia wanted to play. That was probably “Simon Says,” because then she could tell us what to do. Fortunately, she didn’t show up often.

When the night’s game was over, we would gather on Ivar’s big stone front porch and just chat about this and that, and maybe play a very tame version of “Truth or Dare.” I say very tame, because nobody wanted to suggest a truth or dare that might embarrass someone else. Then parents started calling their kids home, and we dispersed.

Unfortunately, my father had picked up a couple of school desks, and school desks require teachers. I don’t know how Marcia found out about them, but as soon as she did, she showed up in our basement to conduct school with her interminable lessons. Subjects varied wildly.

I don’t know what church my grandmother would have gone to. All I know for sure is that she was a prohibitionist. Alcohol was the ultimate evil. She had a younger suitor but he drank, so she chose my grandfather, who was a much older teetotaler. She never attended church. She had a hard time getting around, and she wouldn’t have understood an English sermon in any case, so religion had to be dispensed by her daughters.

Of their children, Aunt Signe was the oldest and she ruled the roost from the time all her siblings were little. No one questioned Signe’s word on ANY subject, at ANY time. She lived on the East Coast for most of her life, though, and in her absence, the family’s religious leadership fell to Aunt Margaret.

I’m sure Margaret was behind the move from the Swedish Lutheran to the Evangelical Covenant. Most of the family followed along dutifully, with three exceptions:

Uncle Carl had married a Catholic girl and moved to the country, where his children were free to do everything Catholic children were allowed to do. And everyone knows that the sky’s the limit for Catholic kids.

Uncle Sigfried, who described himself as the black sheep of the family. When Sig wasn’t working, he was at Jake’s Place, the neighborhood tavern, drinking beer, and he didn’t care who knew it. When I was old enough to go there, I found that Jake was long gone, but Sig was still a legend, because he had once cracked a dozen eggs into a pitcher of beer and drank it all.

The third exception was my father. He said he was Swedish Lutheran and he wouldn’t attend any other church. His kids had to go, though, and we had to be careful about being seen doing something sinful.

1. Drinking alcohol. Coming from a Prohibitionist family, alcohol use must top the list of sinful things.
2. Dancing. Dancing is almost as sinful as sex. Belly-rubbers are the ultimate horror.
3. Playing cards. Only refers to the devil’s cards, of course. Canasta and Uno cards are still OK.
4. Moving pictures. Movies are made in Hollywood by people with little to no moral values, so their products are intrinsically evil.
5. Swearing. You may be surprised by some words, so if you’re unsure, don’t say it.

My father taught me how to play cribbage and smear, but we had to hide the cards if any of the family was around.

Movies were sinful, so although my parents allowed us to go, we had to sneak away where the family wouldn’t see us. And that wasn’t easy, since a few families lived in adjoining houses.

Twin sisters Gladys and Beatrice enjoyed going bowling until a weepy Covenant pastor told Margaret that he was praying that her sisters would repent from their lives of sin and degradation, going to bowling alleys, which everyone knew sold (gasp!) BEER. Margaret soon put a stop to that, and her sisters never went into a bowling alley again.

The girls took that episode to heart and many years later, Gladys’s eldest son appeared in a production of the farce “Perils of Pauline.” There were two showings and my wife and I attended both. He was the star of the show and he was hilarious: He sang and danced with boater and cane; I was so proud of him, but his mother never saw him, because both venues sold beer.

The sinfulness of movies was re-evaluated after Margaret’s son returned from Bible College in Chicago, and informed her that ALL movies weren’t bad.

Movies were then categorized as follows:
Roy Rogers — Almost as good as going to church.
Laurel and Hardy — Mature audiences only. Possible singing and dancing.
Abbott and Costello — Talk about ball games where they sell BEER, so OUT.
Three Stooges — Possibly violently sinful.
Marx Bros. — Definitely sinful.
The line had to be drawn somewhere.