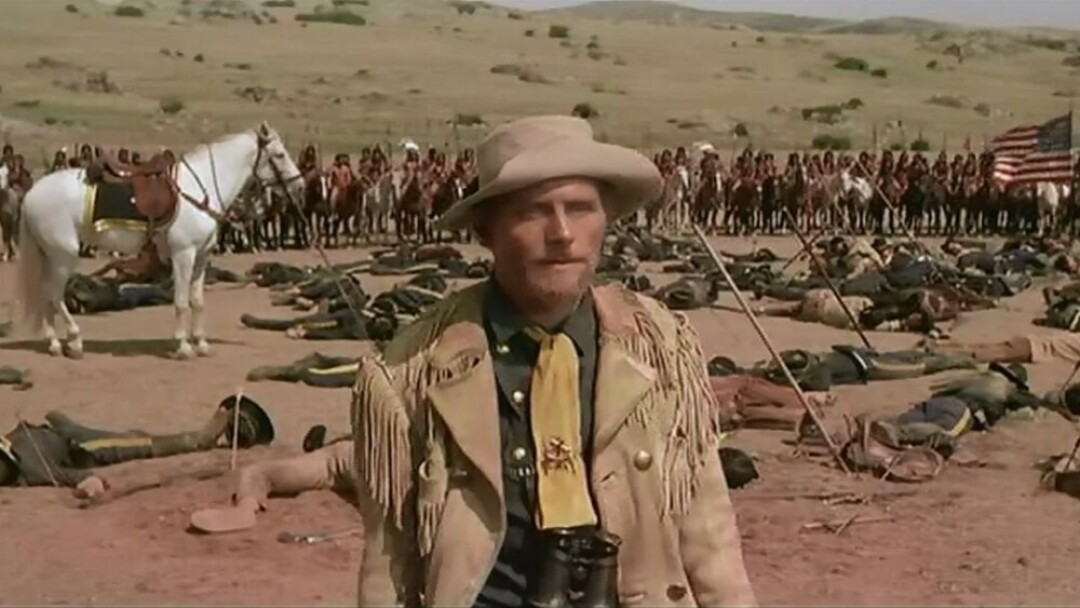 This week we’re dealing in the “So Bad It’s Kinda Good” category with the laughably bad Custer of the West from 1967.

I came across it recently on Amazon Prime as part of my Saturday routine of including a western in the day. I’d never heard of this movie, which stars British actor Robert Shaw as George Armstrong Custer.
Hmmm, I thought, that’s a curious choice.

It’s also got Jeffrey Hunter as Capt. Benteen and Lawrence Tierney as Gen. Phil Sheridan. Tierney’s always interesting and I’ve got a good story about him, so let’s give this thing a shot.

It begins with a montage of saber-rattling cavalry charges Custer led during the Civil War (60 of them by his account in the film), and like much of what takes place, the scene goes on too long.

First thing to know is that this was shot in Cinerama, a process developed in the early 1950s to combat the growing threat of television. Of all the many processes that cropped up to put more butts into theater seats, Cinerama was one of the most complex, a super-widescreen presentation involving three syncrhonized film strips and three screens. However, Cinerama of the 1960s had been reduced to a single strip of 70mm film projected onto a single screen. 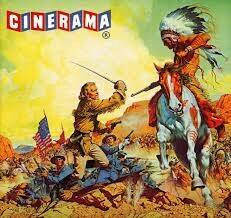 Custer of the West wants you to know you are watching a Cinerama movie, and so inserts several lengthy and incongruous scenes involving harrowing situations – two men tied up in a horseless wagon barrelling down a twisting mountain road, a soldier escaping an Indian attack riding a log down a log flume and a runaway train racing to its doom.

The first runaway wagon scene is truly harrowing to watch as one of the tied up men tries to steer the wagon upside down, but the whole time your brain is asking, who are these men and why are they in this situation?

While the movie never refers to them again, we must surmise the two men in the wagon were settlers who were sent to their doom by marauding Indians, prompting Custer, newly assigned to the territory, to go on the warpath against them.

It’s just the first of many things that don’t make sense in this historically inaccurate tale.

The filmmakers apparently didn’t care too much about detail. Why bother getting a period American flag? Who in the world is going to stop to count the 50 stars in the flag we use? Uhm, everyone who watches this slow-moving dog.

Shaw’s Custer does echo the man himself, who believed in the Manifest Destiny promoted by his government, that the “superior” white European race was meant to colonize “backwards” civilizations such as the indigenous people who lived in territories coveted by the government.

The film was written by two American blacklistees living in exile in Europe, Bernard Gordon and Julian Halevy. The year was 1966 when they got the assignment, and their natural inclination was to modernize the story and make the Indians heroic freedom fighters, and Custer and U.S. forces the anti-heroes (reflecting how some viewed the ongoing Vietnam War), however producer Philip Yordan was having none of that, and suggested that it was such writing that was destroying Hollywood. He told the writers to make a hero of Custer.

This movie was the penultimate film directed by film noir auteur Robert Siodomak, a German director who brought his Expressionist style to Hollywood, best seen in films noir such as The Killers, Criss Cross and Phantom Lady. But all of those had been made in the 1940s, To producer Yordan, Siodomak was still a bankable name, but this appears as a movie made by committe rather than by an auteur.

There is also an odd appearance by Robert Ryan as a deserter by the name of Mulligan. Ryan’s performance is perhaps the liveliest acting in the movie, but he seems to be included just for the sake of having his name – a major Hollywood star of the time – involved in the production.

There is a story that during the production of a choreographed dance number, a drunken actor went crazy and had to be quickly replaced. I have to wonder if it was Lawrence Tierney (Gen. Sheridan). Tierney’s early career was full of promise for him as a tough guy ladykiller, but drinking and a bad temper put him on a blacklist for most producers. There are stories of knife fights and many brushes with the law.

Tierney’s career was revived in 1991 when Quentin Tarantino cast him as crime boss Joe Cabot in Reservoir Dogs, but even Tarantino described him as a mad dog who needed to be sedated and said they got into a punch up the first week of work. 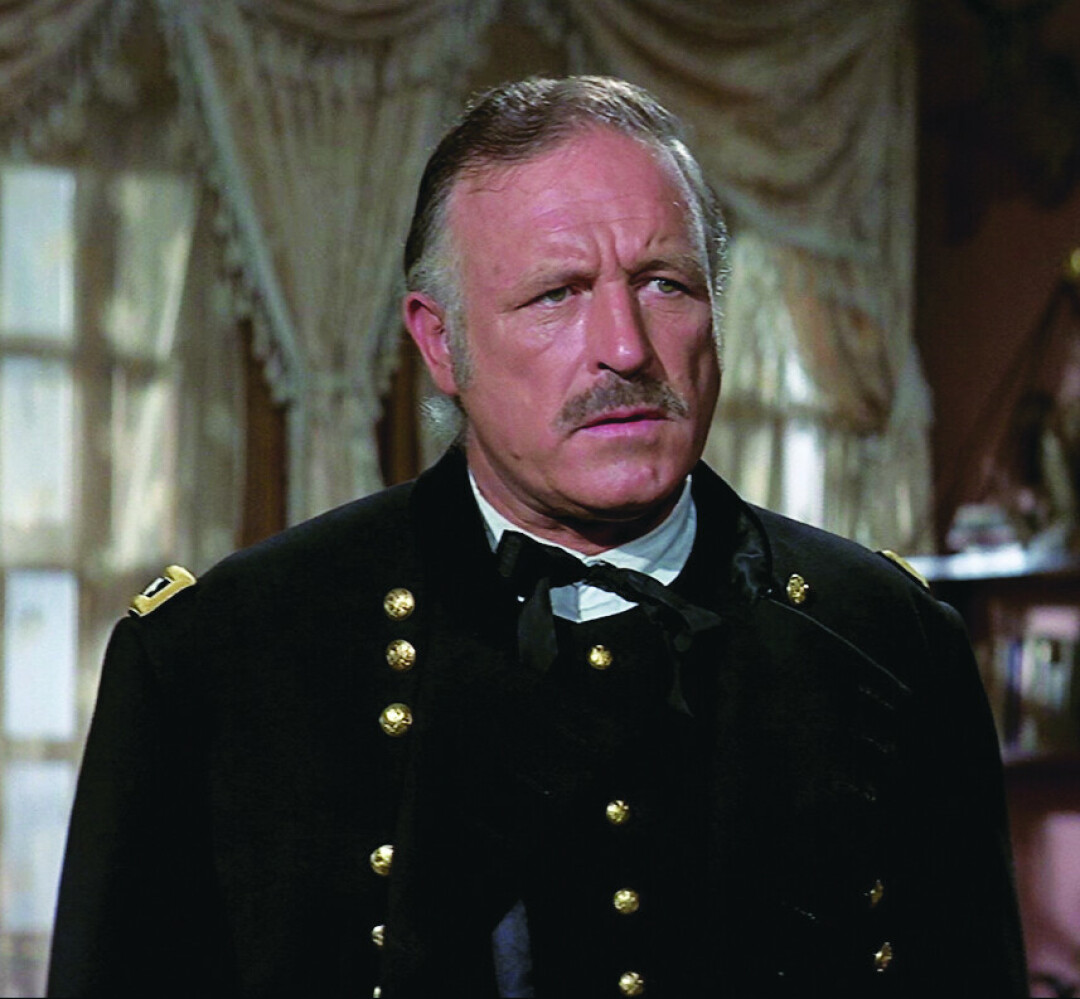 Lawrence Tierney as Gen. Phil “The only good Indian is a dead Indian” Sheridan.

In 2001 when I was working at a daily newspaper in Appleton, Wis., and Appleton-born director Terry Zwigoff was up for an Academy Award for his adaptation of Terry Clowes’ comic book Ghost World for the screen, I did an interview with Zwigoff, and somehow Lawrence Tierney came up. Turns out Tierney showed up to audition for a small role in Zwigoff’s film, hammered and with a bloody nose. He didn’t get the part.

But do catch Tierney as Gen. Phillip “Scorched Earth” Sheridan. I like to think it was him who caused the disruption in the filming, just because it fits with what I know about him.

Perhaps the most inexplicable thing about this movie is why in the world did they place Cheyenne Chief Dull Knife at what became known as Custer’s Last Stand when in fact it was Ogalala Soiux Chief Crazy Horse in the role of Custer’s conqueror?

There is an interesting moment when Custer first takes up his western command and meets Benteen and Reno. He asks why they are in the army, and when Reno replies that he comes from a long line of professional soldiers, teetotaling Custer corrects him and says he comes from a long line of drunkards who just get by in the army and expect a salute because of their rank.

That apparently was a real pet peeve of Custer’s – too many drunks of high rank.

There is also a segment when Custer is summoned to Washington to testify before Congress and tells them that crooked politicians in Washington and not Indians are the problem. He named some names in his corruption charge, including then President Grant’s brother, bringing down the wrath of Grant upon Custer, relieving him of duty. This actually did happen, but Sheridan and others convinced Grant to return Custer to duty.

There’s also a way too long scene meant to display Custer’s fanaticism. He has the men march double time throughout the fort to the beating of drums, until every man and drummer has dropped, except for Custer and a sergeant. When the lengthy scene finally comes to an end, you wonder, what was that? A lot of this movie seems awkward that way.

There’s another tedious scene that takes place in the desert (desert in the Plains?), with soldiers pushing a wagon that has become mired in the sand. Custer rides up and tells them to take it apart and put runners on it. Yes, that is a brilliant solution, but you look around at this desert and wonder where in the world they will find the runners?

When a movie has you asking this many questions about it, you know something’s not right. It has not fully engaged you dramatically enough to suspend disbelief and go with it. That’s what good movies do.