Taco and his boys 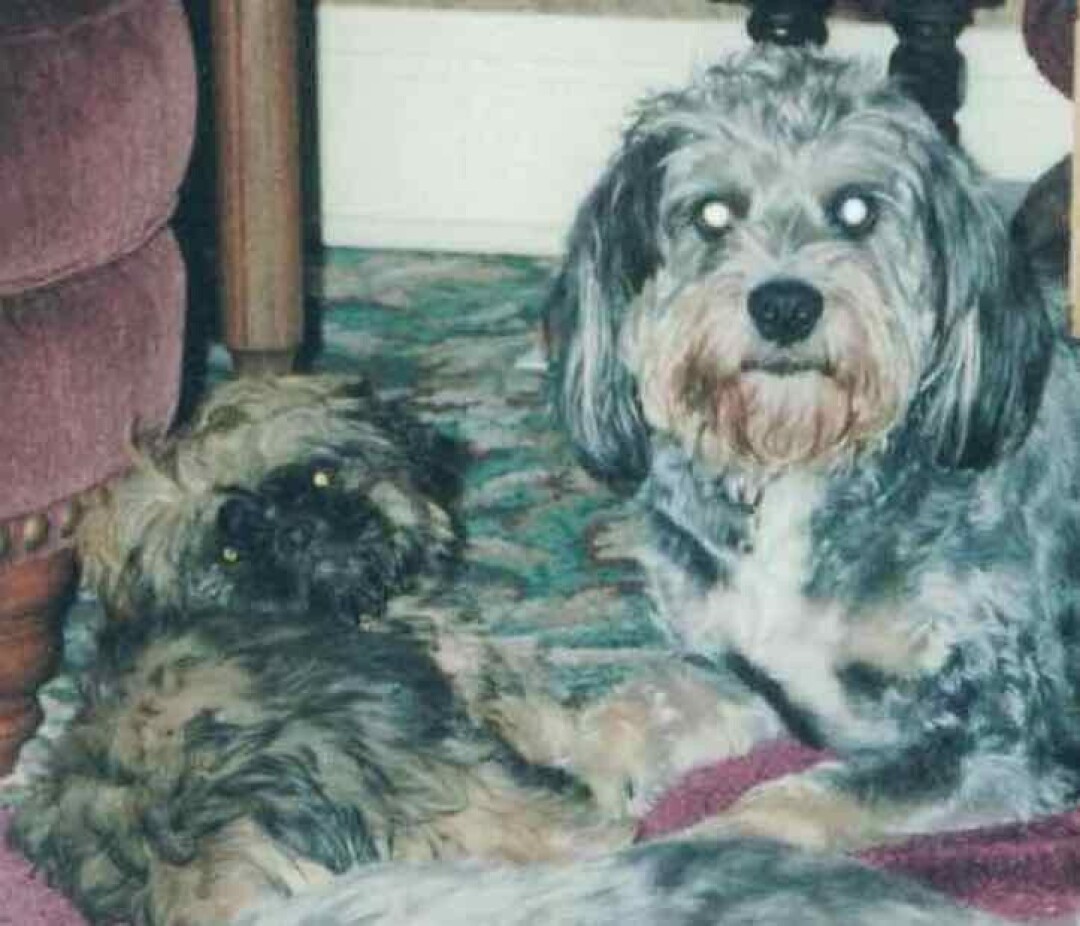 Taco I have already described in this column: a medium sized, shaggy haired, happy-go-lucky dog of uncertain breed. We had Clea, our alpha female when we got Mr. MaGoo as a pup, but it was Taco who took over the mother duties.
From the very first day, and every day without fail, he took MaGoo down and gave him a thorough bath, after which it was play time, with Taco on the floor moving his big head around, while MaGoo joyfully jumped on him. This schedule continued for 2 years, after which I guess Taco felt MaGoo was old enough to handle his own personal hygiene.

The baths may have stopped, but the play times didn’t. Wherever Taco went, MaGoo was his shadow.
I now have Stormy, a pure bred Shih tsu, who looks a lot like MaGoo, but is nothing like MaGoo in personality. Where Stormy at least comes when he is called, MaGoo was very independent and headstrong. He was half Pekinese, so maybe that explains it. When Taco escaped the fence, MaGoo was right behind him. He couldn’t keep up with Taco, of course, so he often got left behind. I was young enough then to chase him around the neighborhood until he wore out and I could corner him by the neighbor’s house. But that was rare.

The desire to follow Taco proved fatal for MaGoo. I came home from a shopping trip to find my wife crying and holding his dead body. Taco had gotten into the habit of running to the L&M Store when he got out, where he would run around the parking lot greeting people as they came and went. Unfortunately, he had to cross a busy street to get there. MaGoo tried to follow him, and was hit by a car.

We got a replacement rescue dog right away, but that dog turned out to be a biter. We couldn’t keep her when we had small grandkids, so we had to return her to the shelter.
After that, my wife’s ankle was shattered, and then it took nearly a year to remodel and move to our new house. We got a very nice dog who was very old. He was supposed to have been put down, but we kept him around for a couple of years before he got too sick.
Then I thought we were done, but I came home from golfing and found my wife in the living room, holding a little black puppy.
Well. at least it wasn’t a skunk, so I just said “Where did that come from?” At the sound of my voice, the puppy wriggled free and fell to the floor, ran to me and asked to be picked up. What chance did I have? He chose me, and from then on, he was my dog. Turned out her sister’s dog had pups, and he was one of them, and she had already named him Riley. Her sister’s dog was a little Poodle/Lhaso Apso, but little of that showed in him, except for his personality. There was little doubt that his father was her boyfriend’s Chihuahua.

I quickly found out that when Riley wriggled, he was as hard to hold as a wet eel. I brought him out on the back porch, and he wriggled out of my grasp and fell to the cement steps to get to the other dogs out there. It must have hurt, but he ignored the pain.
Again, Taco took over the mother duties. Same routine: two years of thorough baths and then playtime. At the new house, things were different. On the North side by the back door was the dog run. There was only one gate that I could see from the door, and the favored entry was the front door, so there was much less chance of the gate being open. 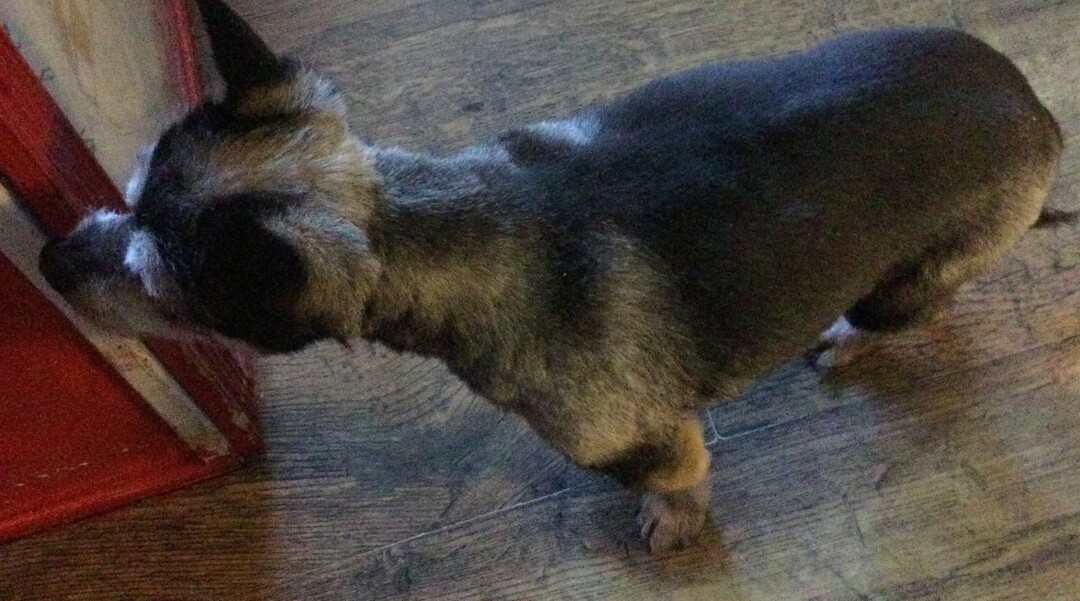 Here Riley would jump up and latch onto Taco’s thick fur. Taco, with that big happy smile on his face, would run back and forth in the dog run with Riley hanging on, looking like a growth on his side. I could tell they were both enjoying it immensely.
I put a collar on Riley when he was a pup, and he was OK with it. Then he got his dog tags tangled in a lace curtain and panicked. He was wriggling so much that I couldn’t untangle him, so I had to remove the collar. After that, any time I picked up the collar, he ran under my bed where I couldn’t reach him.

Taco is long gone now, and Riley is getting old and a little lame in one back leg. He will be 16 this October. Cataracts started forming a few years ago, and as far as I can tell, he is now totally blind. I had my deck redone on the South side, but when I went out there, my dogs would give me the sad eyes from the door, so I had that yard fully fenced in too. The other dogs love to run around there, but I could tell that Riley was nervous when I brought him out because he didn’t know where he was.

He readily goes down the steps on the North side, because he has been going there all his life, and it’s where he and Taco played when he was a pup. He knows where he is all the time there, just as he does in the house, and always finds his way back to the steps to come in. When he goes out in the summertime, he will find a sunny spot on the grass where he will lay down and soak up the sun for a few minutes.

It’s one step at a time for him now, but so far, he always makes it. I have to take care to close the dishwasher door so he doesn’t run into it when he comes in, because he runs to get a treat for going outside.
He will still go under the bed most of the time, but when I go to bed, he has to come by my side. There is a 3 step doggie staircase that he climbs to do that. He has to maneuver around on the top step because of his lame leg, to get into position for that final jump up. He will roll around in a rough textured blanket to scratch himself, but he always ends up sleeping by my legs, as he has always done.

When he wants to get off the bed, he feels around for the corner, and jumps from there, trusting that I will keep that area clear of shoes and other dogs.
Despite his problems, Riley enjoys his life. Every evening near bedtime, I get out two hot dogs and cut them in half. Then I yell TREAT TIME! and the dogs come running. Riley has a little extra wriggle as he runs up the hall, showing how excited he is.
He’s little and he’s black, and he loves to be by my feet, so it’s hard to keep from stepping on him. But he IS the pre-rinse cycle for the dishwasher, so he is first in line for my dirty dishes, and he’s good at his job.