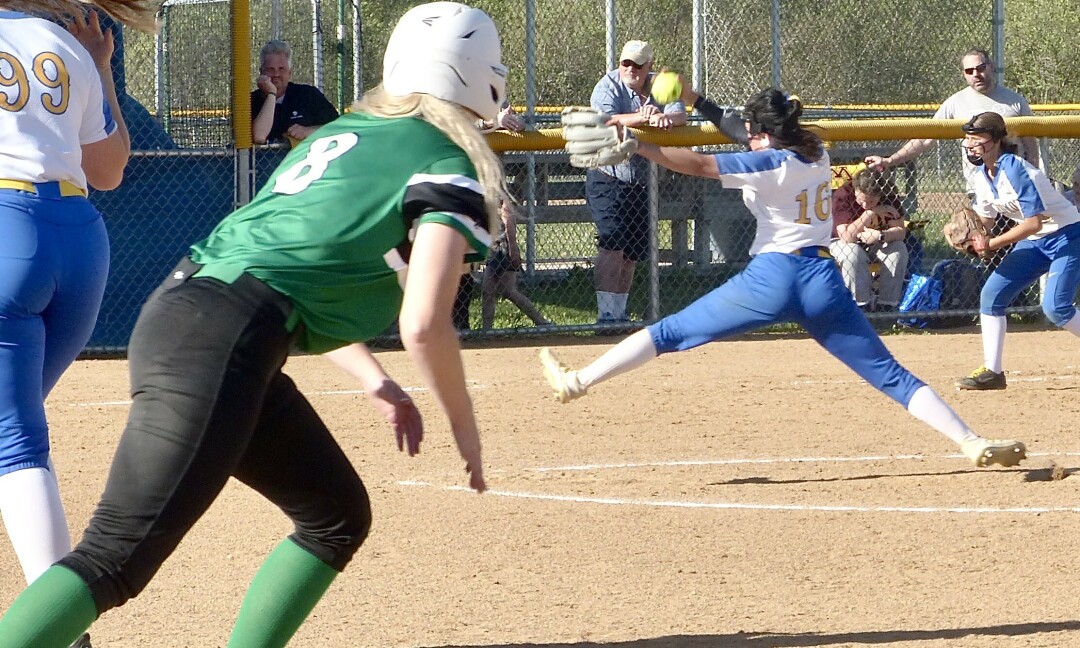 Greenway’s Claire Vekich broke from first base as Esko’s Miranda Kelley kept her no-hitter alive through six innings, before a wild finish.

Greenway of Coleraine played a late-season softball game at Esko last week, with both teams sharpening their game for this week’s Section 7AA tourna-ment, and spiced the game up with a fantastic pitcher’s duel for good measure, between Greenway’s Miranda Gernander and Esko’s Miranda Kelley, as well as a play you may never have seen before.

It was scoreless until the last of the third, when Esko got the benefit of a walk, and then tried a sacrifice bunt to advance the runner to second. The Greenway infield executed perfectly, with the first and third basemen charg-ing hard, the second baseman covering first, and the shortstop covering sec-ond.

The bunt went toward third, and the throw to first got the out, but Esko’s runner alertly saw third base was uncovered and rounded second and took off for third. The Raiders second baseman, covering first, did her job but then had a decision to make. She made a logical move, and feathered a throw right to third base – but nobody got there to catch it, and as the ball skipped into foul territory, the run scored.

I walked up to the railing along the first baseline, where I had spotted two familiar faces. One was Bob Gernander, who should never be forgotten as one of the state’s premier high school hockey coaches for leading tiny Greenway to state hockey championships in 1968 and ’69. The other was Kenny Gernander, his son, who starred at Greenway, then with the Gophers, before playing and coaching in pro hockey out east. Kenny’s daughter is Miranda, the Raiders current pitcher, as a sophomore.

I asked Bob if he had ever seen that – a runner scoring all the way from first base on a sacrifice bunt. “Yes, I have,” he said, quickly. “It happened to my team once and it cost us the chance to go to the national fast-pitch tournament. I was playing for Cloquet, and Herbie Brooks was playing first base for Whitaker Buick in St. Paul. He was running on first, and they sacrificed, and when our second baseman caught the ball covering first, Herbie kept right on running to third. Our second baseman turned to say something to the umpire, and Herbie never stopped, going all the way to score. We lost the game, 1-0, and the chance to go to nationals.” 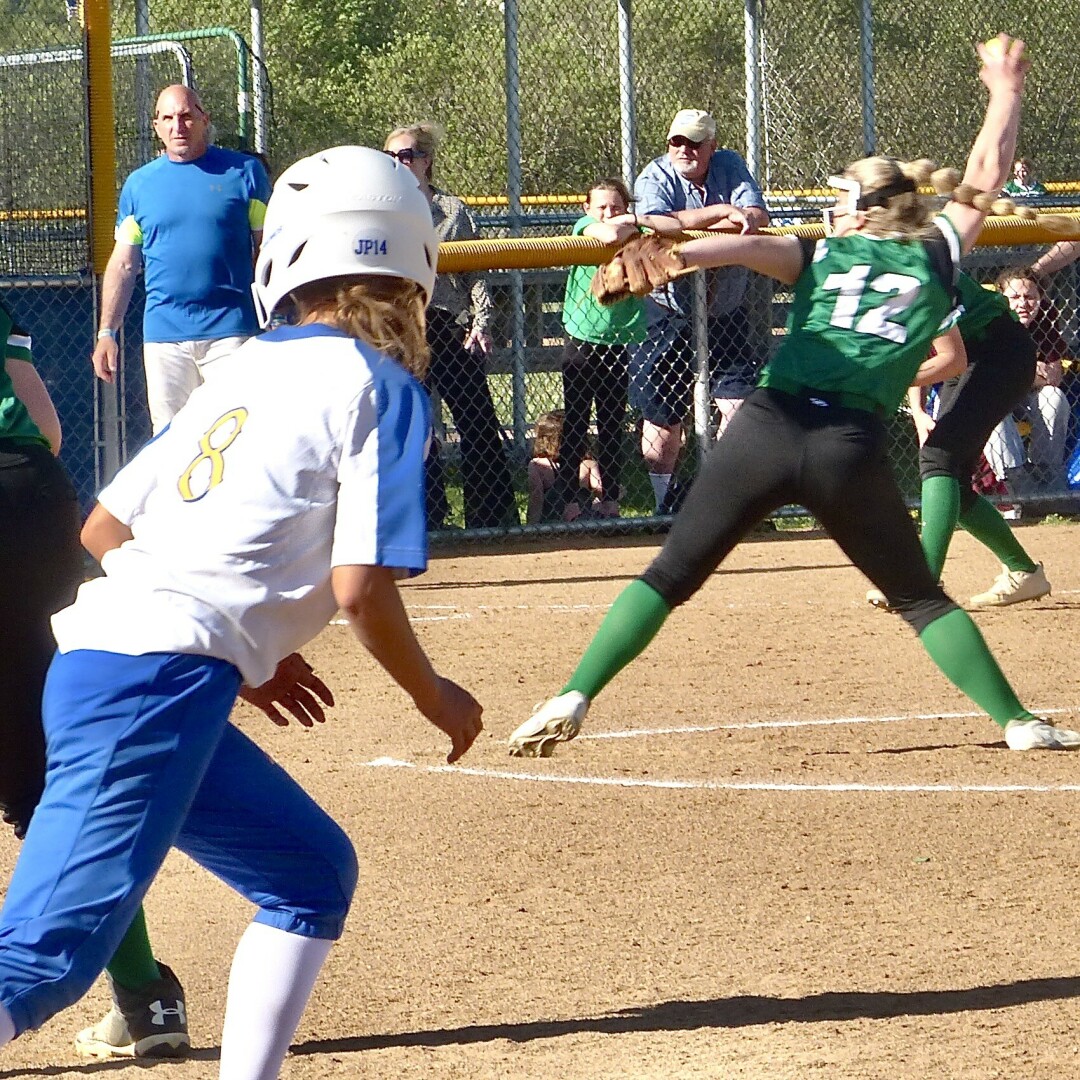 Greenway of Coleraine pitcher Miranda Gernander not only pitched the distance, but her 3-run home run was the centerpiece of a 7-run last-inning rally.

That spectacular scoring play, however, was just part of a hotly-contested battle between Greenway and Esko.
In the last of the fifth, Esko struck again by bunting. This time, the third baseman charged and the bunt popped up – just over the third baseman’s head and a run scored.
The Raiders defense seemed to come a bit unglued after that, and a couple of errors led to a 5-run inning and Esko led 6-0.
“Wow,” I said to Kenny. “You’ve got a great team, but this one might be over. I told the TV camera guy that if he’s got that first run on video, he might as well take off, because that’s his video clip.”
“I don’t know,” Kenny answered. “I think we might still see two or three home runs here.”
Now, it’s good to pull for your team, and Kenny’s daughter was pitching, for a Raiders team coached by his wife, Kerby Gernander, but against an imposing Greenway batting order, Esko’s Miranda Kelley had a no-hitter going into the top of the sixth.
Claire Vekich walked again – one of four times she walked in the game – and she stole second and wound up scoring a run when she lured a throw home on a grounder, and then knocked the ball loose from the catcher. But Esko still 6-1 and the Raiders hadn’t gotten a hit off Kelley going into the top of the seventh.

Suddenly, Greenway’s bats started finding openings, like, over the fence.
Jalin Saville hammered a line drive over the fence in left-center, and the Raiders had a hit, and cut the deficit to a still-imposing 6-2; another couple of hits put two runners on, and Miranda Gernander blasted another one out of the park, and the 3-run home run made it 6-5; another baserunner, and Kennedy Hanson blasted the third home run of the inning, a 2-run shot that vaulted the Raiders into a shocking 7-6 lead.

I looked at Kenny Gernander, and he just had a knowing grin, because his call of “two or three” home runs had just come true. Greenway had smacked all six of its hits in the top of the seventh, and all three of its home runs, to score all seven of its runs. But it wasn’t over yet. Miranda Gernander went back out to the circle and while the Eskomos completed an accumulation of nine hits off her, perhaps the hardest hit of the day for Esko was a line drive sent rocketing toward left-center that was speared by shortstop Claire Vekich to end the game.

When it comes to high school sports – any high school sports – there are three schools that always seem to capture the truest spirit of over-achieving, and they are Esko, Proctor and Greenway of Coleraine. In no particular order, usually, but this season, particularly in girls softball, Greenway and Proctor went into the Section 7AA tournament with a combined record of 39-1.

Perhaps as an example of how competitive they and the section is, Greenway was 20-0 and Proctor 19-1, and Proctor’s only loss was a 7-5 battle against Greenway. Yet somehow, Proctor wound up the No. 1 seed and Greenway No. 2 in the sectional, which unfolds this week.
Nobody seemed to be complaining, and Bob Gernander said from his observances, “Proctor has the best pitcher.”
He meant Maddy Walsh, who has put her superb control and high velocity on display to sting Superior with its only loss of the season, and helped the Rails steamroll everyone – except Greenway. She and the Rails crushed an improving Denfeld team 20-2 in their 5-inning pre-sectional finale.
Esko is seeded third, and while Proc-tor got a first-round bye, Greenway and Esko had 10-run-shortened victories in Monday’s opening round and all of the AA section teams will begin double-elimination play Thursday.
To imagine Greenway winding up against Proctor in some sort of double-elimination championship would be entertainment of the highest order.
High school baseball also is into sectional playoffs, and we can anticipate some upsets there, too. Catching up with Greenway at Proctor last weekend was an example of their gritty competitiveness. Proctor had shut out Greenway into the late innings, but the Raiders rallied twice for 5-run innings and forced Proctor to retaliate with its own 5-run rally to escape with an 11-10 victory in 8 innings. 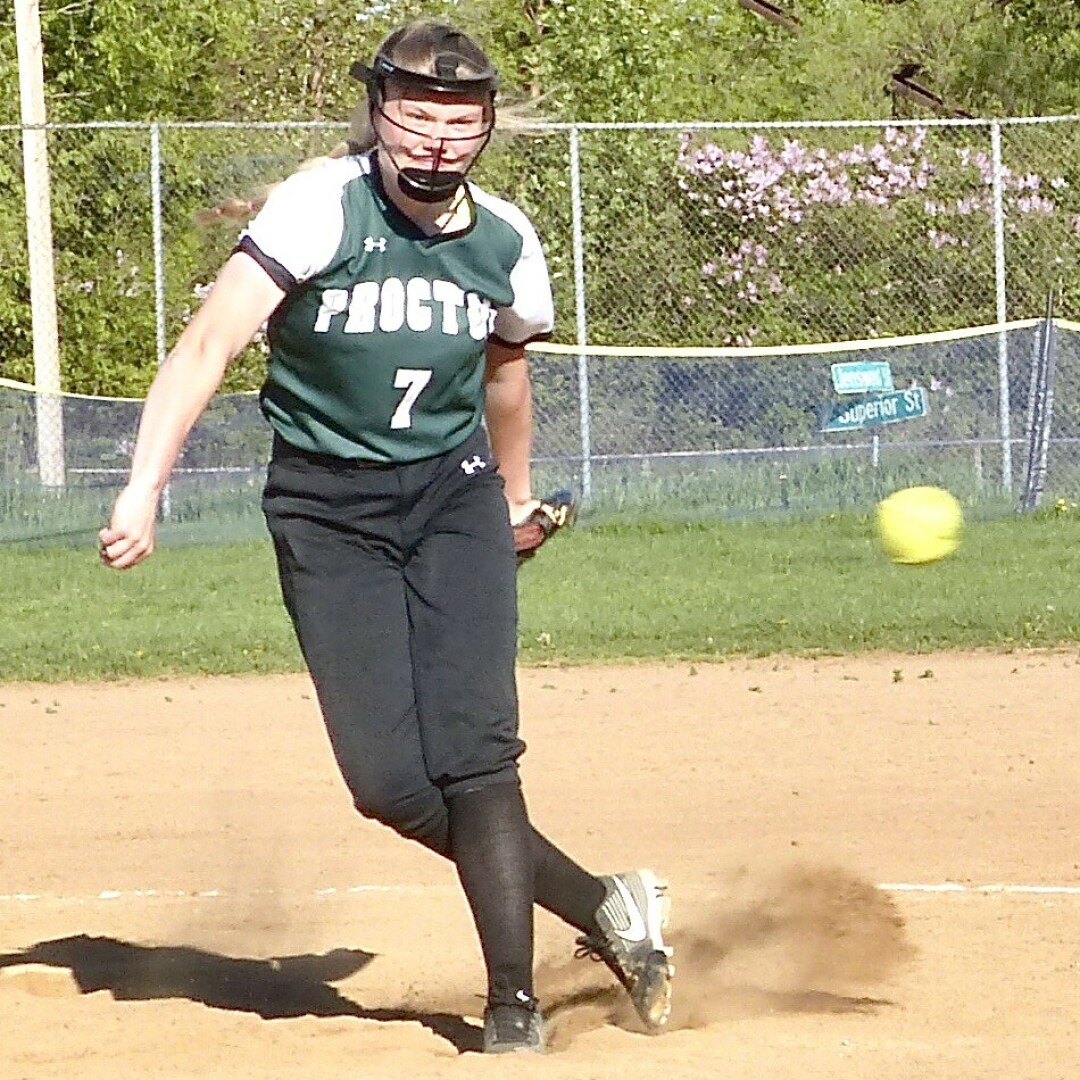 Proctor’s hopes as No. 1 seed in Section 7AA rides on the impressive pitching of Maddy Walsh.

You can’t make that stuff up!
There was no shortage of other sports topics to focus on this week.
• The Wild played their best hockey to erase a 3-1 deficit in games and win twice to tie their NHL playoff series with the Vegas Golden Knights at three games apiece and force a seventh game, then had to endure an outrageously-allowed physical battering – losing Jonas Brodin when he was run headfirst into the boards, Ryan Suter when he was hit from behind and had his face planted onto the goal post, and along with two elite defensemen, they lost top center Joel Ericsson Ek when he also was pushed into the goal post – coaxing analyst Pierre McGuire to refer to such disqualification-worthy hits as “playoff hockey.” They suffered a tough 5-2 Game 7 loss to send them into the off-season empty-handed;

• The UMD women’s hockey team captured the biggest prize in the fifth-year-transfer-portal sweepstakes by acquiring Elizabeth Giguere as a fifth-year graduate transfer from Clarkson, where she became all-time record scorer, highlighted by scoring 37 goals, 29 assists for 66 points as a junior when she won the Patty Kazmaier Award as the top women’s player in the country;

• A spectacular 105th Indianapolis 500 was run Sunday, with Helio Castroneves – cut adrift by Roger Penske’s team as being too old and uncompetitive – but catching a ride in the Meyer Shank racing team’s entry, a used car bought after it had qualified 33rd a year ago. But after working his way up from mid-pack, Castroneves, 46, won an incredible, lead-swapping duel with Spain’s Alex Palou, 24, that covered the last 30 of the 200 laps, passing him for the final time with two laps to go and hanging on to win his fourth 500 by a half-second, in a 1-2 finish for Honda-powered cars over the predominant Chevrolets;

• And UMD sophomore Haleigh Reindl earned All-America commendations in the NCAA Division II track meet in Allendale, Mich., when she placed seventh in the final. Reindl had qualified by finishing second in a personal-best 2:09.08 in her preliminary heat, and, indicative of how many runners were at the event, she improved her personal best with a 2:08.77 in the final. The top eight get All-America certificates.