Chef show just another notch for this young gun 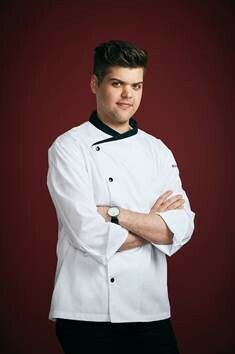 If you caught Duluth native Matthew Francis Johnson on the May 31 premiere of Gordon Ramsay’s new cooking competition show Hell’s Kitchen: Young Guns, you should know that originally he was “sad that people were going to see it.”
But, he adds, “That was two years ago” when he was just 22 years old.
Since then he has developed a more well-rounded view and he hopes people have fun watching the 20th season of the cooking competition. This season’s twist is that no contestant is older than 23.
On Monday’s first episode, the 18 chefs – one of whom will become Gordon Ramsay’s protégé and head chef at one of his Las Vegas restaurants – were given 45 minutes to present him with a signature dish.
Matthew chose cioppino, a shellfish and fish stew. He explained that it is a dish close to his heart because he cooked it for his family when he came out to them.
However, a rookie mistake of leaving the digestive tract in the stew’s shrimp resulted in Matthew earning a 2 from Ramsay, who scores on a scale of 1 to 5, with 1 being disgusting and 5 being restaurant quality. Only one chef scored a five.
“It was a crazy experience,” Matthew said in a telephone interview with The Reader days before the show’s premiere.
“There are good and bad moments, but that’s how the show is,” he said. “That’s why everyone loves it. It’s a really fun, crazy, chaotic environment. I would say I’m glad I did it because I learned a lot about myself. Living it, it was definitely a challenge. I hope people laugh with me not at me.”
This is no life to laugh at for at the age of 24, Matthew Francis Johnson has accomplished more than most people twice his age.
The 2013 graduate of Denfeld High School said he always loved food and cooking and grew up watching a lot of cooking shows. After graduation, he went to the Culinary Institute of America (CIA) and was able to graduate debt free by paying his way with $175,000 earned through more than 25 scholarships and winnings from five cooking contests.

He also worked in restaurants while attending CIA. In 2014 he served as chef de partie (a station chef, responsible for a specific thing in the kitchen, such as grill or pastry chef) at a Seattle restaurant and in 2015 he worked by day as sous chef (second in command under the chef) at a Provincetown, Mass. restaurant, and by night as a server.

“I had four beautiful years at the Culinary Institute and worked with passionate chefs,” he said.
As part of his degree in culinary arts management, he was part of a team that built a restaurant on campus and ran it for a semester.
“My family, while we had a lot of love, we didn’t have a lot of money,” he said. “I had to do scholarships to pay for school. I applied for everything. I entered cooking competitions. By the time I graduated I had earned $175,000 to pay for school. It really saved me. I have so many friends who are struggling with student debt.”

While at school, Matthew started making food videos in a big way.
“After my freshman year, I committed to doing one video a week,” he said.
The result?
Three-hundred-some food videos that were being seen by people, including someone at the internet media company BuzzFeed, which was adding a new component called Tasty, featuring the very thing Matthew had been doing, making recipe videos. They liked his work and offered him a job just as he was about to graduate from CIA.

“I graduated in December 2016 and moved right to LA,” Matthew said.
There he made more than 100 recipe videos that have been seen by millions of viewers. But more importantly, it upped his game by learning how to work with talent, direct and be on screen himself.
But after 2 ½ years, he was a victim of budget cuts at BuzzFeed.
“I was one of 250 people let go,” he said, but rather than seeing it as a negative, “I was excited to try something new.”
He began producing videos for other food companies and restaurants. He’d been doing that for a few months when he was approached by the producers of Hell’s Kitchen about being a contestant after seeing his work.
Since he is not running Ramsay’s Las Vegas restaurant as the winner of the competition, we can assume he did not win the show.
“I went on with my life,” he said. 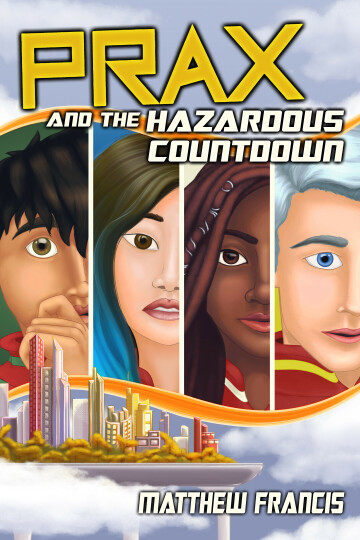 For him, that includes starting his own production company and completing the first of what he envisions as a series of six young adult novels that he hopes will become as popular as the Harry Potter series.
The first book – Prax and the Hazardous Countdown – was published in February and is available from Amazon and at the Zenith Bookstore in Wet Duluth. It’s the story of four genetically altered teens tasked with saving the world.
And in a nod to his hometown, Matthew said, “I tied it all back to Duluth, which is really, really cool.”
The futuristic story includes a sky island over Lake Superior. The idea for the book has been percolating in his mind for about five years, and when the shutdown hit in March 2020 and Matthew found himself back with his family in Duluth, he decided it was time to start writing. He finished it in December and it was published in February.

He said readers will find tons of food in the book as well as representations of his interests in sci-fi, mystery, martial arts and diversity.
“I’m gay,” Matthew said, “so having LGBTQ characters was really important to me, and to showcase my hometown.”
Matthew said he is currently working on an audiobook version of Prax and the Hazardous Countdown.
Shortly after the book was published, Matthew got a telephone call from a chef colleague who had seen his work online, and had a job offer with Maryland-based Freshly, which ships prepared-meal packages to subscribers around the country.
“Freshly’s an interesting place to work,” Matthew said. “I moved to Maryland, bought my first home, and am working in my free time to create food videos.”
Ultimately, Matthew said he would like to bring his culinary skills back to his hometown and family, but in the meantime, you can follow him at @matthewfrancisj. Also check out his YouTube show DinnerViews, in which he prepares a guest’s favorite meal while interviewing them.