Build it and they will use it 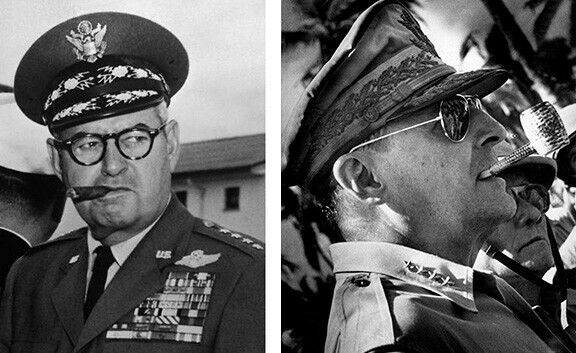 Two smoke-’em-if-you-got-’em generals, LeMay and Macarthur, believed the U.S. should wield its nuclear arms against enemies of democracy.

“The difference between men and boys is the price of their toys.” Malcolm S. Forbes (1919 – 1990) business leader and publisher of Forbes Magazine

In past articles I have discussed the many costs of war. I have also written about the danger of nuclear weapons. Rather than being a “deterrent” that keeps us safe, nuclear weapons are a real and present danger to everyone. This week there was a news story that brings home the reality of this statement.

The New York Times reported that in 1958 U.S. military leaders had plans to use nuclear weapons against China. Daniel Ellsberg (who leaked the Pentagon Papers about the Vietnam War in 1971) recently posted online a secret document showing Pentagon leaders were willing to use nuclear weapons to stop China from attacking the Republic of China on Taiwan.

Historically the island of Taiwan had belonged to mainland China. In 1949 the “free” Chinese were defeated in a civil war by the communist Chinese and fled to Taiwan. In 1954 and 1958 there were brief battles, called the first and second “Taiwan Straits Crisis,” over several smaller islands occupied by the “free” Chinese. Today communist China still claims Taiwan belongs to them.

The fact that the use of nuclear weapons was discussed during the 1958 Taiwan Straits Crisis is not new.

What is significant about the new document is that it reveals the cavalier thinking of military leaders at that time. According to the document they considered the use of nukes “inevitable” and that the U.S. “had no chance of success (preventing a Chinese attack on Taiwan) unless atomic weapons were used from the outset.”

They also assumed the Soviet Union would aid China and retaliate with nuclear attacks on U.S. military bases in the area (China had no nuclear weapons then). The document says they were willing to accept this risk.

The takeaway from all this is in 1958 our military leadership was willing to gamble on a nuclear war with Russia over some insignificant islands off the coast of China.

Today we are fabricating a military confrontation with China over insignificant islands in the South China Sea. Will today’s military “experts” advise using nukes to “contain” the current Chinese “threats” to our national security and our “vital” national interests? I don’t know. But history shows we have never been shy about planning or threatening to use nuclear weapons. Using these horrible weapons of mass destruction has been “on the table” since they were created.

We did use them in 1945 against Japan. After WWII the U.S. and British military planners proposed nuking Russia before they could develop the bomb. General Douglas MacArthur and General Curtis LeMay wanted to use them in the Korean War (an aside: Curtis LeMay ran as the vice presidential candidate with the racist George Wallace in 1968).

In Vietnam advocates of “bombing them into the stone age” suggested using nuclear weapons. Today our government refuses to adopt an unqualified “no first use” policy for nuclear weapons. We go ballistic if any other nation seeks these weapons. But we are, in our minds, “exceptional.”

In 1958 cooler heads prevailed. Dwight Eisenhower was president. As the former Supreme Allied Commander in WWII, he knew about the horrors of war. He had opposed dropping the nuclear bombs on Japan. He was not averse to using military force, but he was informed, reasonable and sane.

This can not be said about Donald Trump. This ignorant, emotionally unstable man frequently exhibited erratic, uncontrolled behavior that ignored accepted norms of presidential conduct. He was considered by many, including former military leaders and members of his own party, to be a danger to the nation.

The fact that for four years Trump had the sole power to initiate a nuclear war should scare the hell out of all of us.

Donald Trump is a perfect reason why we must end the sole, unchecked authority of U.S. presidents to launch a nuclear attack. No president should have the sole power to start a nuclear war. No single person should be allow-ed to threaten the existence of billions of people.

For decades we have ignored the constitution separation of war powers in this regard. For too long we have literally gambled the fate of the world on our president’s emotional stability and judgment.
This year bills have been introduced in Congress to prohibit the president from launching a nuclear first strike without a declaration of war by Congress. The Restricting First Use of Nuclear Weapons Act of 2021 (HR 669 and SB 1219) also limits the situations in which any president could introduce nuclear weapons into a conflict.

These are good first steps. But we need to do much more including:

• Taking our nuclear strike forces off hair-trigger alert status.
• Cutting the trillion dollar plan to “modernize” our nuclear arsenal. This is a complete rebuilding of our nuclear arsenal and is fueling a new nuclear arms race.
• Returning to negotiating reductions in nuclear arsenals with Russia and China.
• Ratifying the U.N. Treaty on the Prohibition of Nuclear Weapons

Men’s toys are more expensive than those of boys. They are also more destructive – especially for men with macho, militaristic attitudes.

Throughout human history every technological advancement has immediately been applied to developing new, bigger and more destructive weapons and tools of war. Inventing the wheel resulted in the chariot. Learning to smelt metals produced sharper, stronger swords. Discovering nuclear fission gave us the bomb.

Build a weapon and the warriors will use it. People must demand the abolition of nuclear weapons. As long as these disastrous toys exist there is a real danger that someone, somewhere, at some time will to use them.