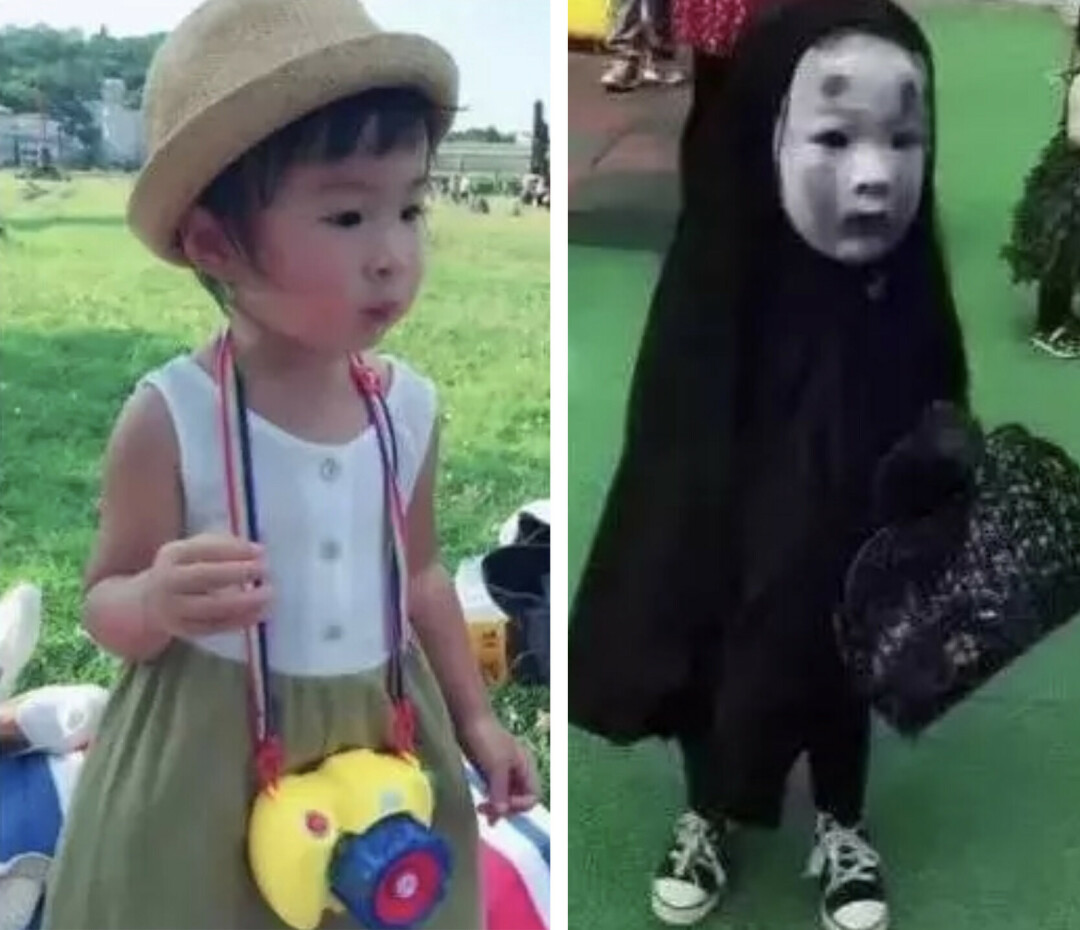 Halloween costume that scared the other kids.

When my grandfather came to America from Sweden, his name should have been Tennyson, but the official that registered him couldn’t be bothered, so all the Scandanavians were listed as Johnsons. Some officials were better at their jobs or could read at least, because we do have a lot of Bjornsons and Ingvaldsons and so forth around for variety.

My grandmother came from Norway. I have no idea what her name would have been. Her father and brother immigrated here after she was married, and they took the name Johnson, too, just to avoid confusion.

On the other side of my family, my grandmother was French Canadian, and her family was the LaBelles. LaBelle means The Beautiful in French, so I always consoled myself by thinking “Well, I must have had a beautiful ancestor somewhere along the line.” Then someone traced the line back to 1600, to an ancestor in Normandy named Lebel. Some social butterfly relative changed the spelling some time in the eighteenth century. My dreams were crushed.

The Swedish names end in SON, as in Larson, while the Danish ends SEN as in Larsen. I don’t know why, but Norway is between those two countries for the most part, but the names seem to be different. My uncle came from Norway in the late 1940s — his name was Skaarness. Our neighbor, who came from Norway before my grandparents, was an Ivar Wagtskjold (Walk-shawl) I have no idea what either of those names mean in English.

Ivar had a son named Lud, and Lud had a son named John. John got tired of spelling his name out for people, so he went traditional, and changed his name to Ludson. That probably should have been pronounced as in Lud’s son, but most people probably pronounced it Loods-son. I doubt that John would ever correct them on it.

Army basic training at Fort Leonard Wood Missouri brought a lot of guys with ethnic names, which the First Sergeant struggled mightily with. It was hard to keep from busting up when he was working on Cyznik (Sizz-nick).

One of my Army buddies said he had been in a lot of different cities, but had never seen his family name (Fusby) in any of their phone books. It seems like that is not that peculiar of a name, but we didn’t see any in the St. Louis or Kansas City phone books either, at least not with that spelling.

Unlike the Swedish, Danish and Icelandic names which have to do with relationships (sons and dottirs), Finnish names describe the area they came from. This is great, and educational, because you can learn another language as you learn the meaning of names. If you have a lot of Finnish friends, you too can be a polyglot. My friend and Finnish Professor Ron Jokimaki had a family band called the River Hill Rangers. Jokimaki means river hill. I know a lot of Hills whose original name was Maki, as well as a lot of Makis. My friend Duane Stonelake’s original Finnish name was Kivijarvi, and I dated for a time a Finnish girl named Ussijarvi (Rock lake.)

Dr. Jokimaki tells me the ending -nen means small, so Jarvinen is a small lake. ( Incidentally, if you happen to see Uncle Lucky in concert, you may be able to wangle a Finnish lesson between sets.)
I am not only working on my Finnish. A sweetie-pie in Chinese is called a neu-neu (pronounced new-new). My Chinese instructor Xuan sent me a picture of a neu-neu and one of the same little girl in her Halloween costume, which makes her look like a little Chinese man. The costume was so realistic that some of the other children got frightened and started to cry, Xuan reported.

You would think that English names would be straightforward for an American to pronounce, since we are both theoretically speaking the same language. I owe it to P. G. Wodehouse ( pronounced Wood house) for the correct pronunciation of the name Fotheringay-Phipps: It’s Fungy (rhymes with spongey)-Fipps.

I have heard said that the hardest name for Americans to pronounce is Worstestershire. If you Google it, you can hear an Englishwoman and an American man saying it. It sounds like the American is saying Woo-stuh-sure. Still, another posting that claims to be the correct pronunciation says it’s Whoo-stuh-shuh. So no wonder it’s so hard. The experts don’t even agree.

It doesn’t help to know how to say Worcester, Mass., either, which is pronounced Wuss-Ter.
We have a large naval base in Norfolk, Virginia. This is not pronounced Nor-Foke, it is pronounced Naw-Fock, which sounds like a Boston accent to me. A person could get into trouble cheering for a local sports team there.

The first time I visited New Orleans, I couldn’t believe how the locals pronounced the names of the streets that had names which appeared to be French. With the large Cajun population, I thought they would at least have a small French flavor. On the contrary, the local pronunciation of those street names sounded like an ignorant American tourist trying to pronounce the name of a French city .

New Orleans isn’t the only place that exhibits this peculiarity. Versailles, France is pronounce Ver-sigh. Versailles, Kentucky is Ver-Sales.

While traveling around the country, a lot of people had to be corrected when they pronounce Cloquet Klo-quet. Except one desk clerk at a motel I was checking into in Atlanta, Georgia, who said “Cloquet! Nobody lives in Cloquet!” Turns out he was transplanted from Virginia. I know he told me how he got from the Iron Range to the Deep South, but that was 40 years ago, so I’ve forgotten that part.