An elegant and organic tasting 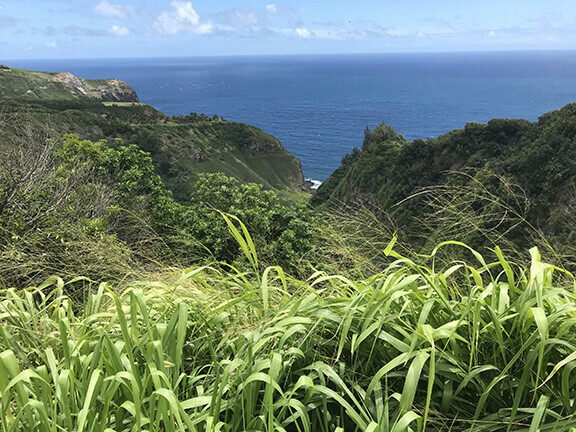 We had planned to drive out on Ulapalakula Road to go to Maui Wine for a tasting, however, Maui Wine, like most places since the plague, has instituted a reservation policy. There was a two-hour wait when we arrived during a light but steady rain. As we walked back to the parking lot, we got a message saying that a reservation was open in an hour.

My traveling companion and I walked back up from the parking lot to the tasting area to see the hostess and confirm our reservation, but when a goonie tourist jumped in line in front of us, it prompted me to wsay something like “I should punch that guy in the head,” which prompted my traveling companion to register embarrassment that I had even allowed such a vulgar thought to escape my lips in a place as hallowed as Maui.

So we decided to leave and try something else. We didn’t know what, but I was feeling lucky.
As it turns out, our Maui host, who waited for us in the car while we went to see the hostess, had called a distillery and made a reservation for the three of us to do a tour, and they just happened to have an opening at 5 pm.

Since that was several hours away, and we were already on the wild Ulapalakua Road, we decided to keep going a ways to fill our souls with the gorgeous views of backcountry Haleakala, on a narrow, winding road that reveals spectacular mountain cliff and ocean vistas that cause complete strangers to smile at whomever they meet and exclaim on the beauty. It is impossible not to do so.

And it’s oh so windy. “Too vindy!” as my old neighbor in the Molokai Akau neighborhood of Kahahuli used to say nearly ever day we lived there.

I had not done my research, so was unaware of the distilleries on Maui. There is more than one, but we were headed to High Seas Spirits Organic Farm and Distillery on Omaopio Road in Kula, home of the incredible Ocean Organic Vodka.

This distillery is proudly the only 100 percent solar-powered distillery in the state of Hawaii.
The farm is in the foothills of Haleakala, with a spectacular view of the north and south shores of the beautiful island, as well as majestic Haleakala towering over everything in the background.

You drive in through a phalanx of gorgeous agave plants, followed by a small grove of sugar cane, the buff, almost bamboo-looking nature of this particular cane variety is beautiful as the buff-colored trunks gyrate in the May trade winds and the green fronds wave at us. This place is all about sugar cane, with more than 30 varieties grown and on display on the 80-acre farm. All of the spirits are made from organic sugar cane grown on the farm.

As soon as we pulled into the parking area and made our way into the grassy area that leads to several newish-looking buildings, we felt ha[ppy to be there. The buildings include a recently opened café and a merchandise store. Within a fenced area is the distillery and an open air tasting bar.

We were signed up for a tasting, but we did not know beforehand that we could order food and an array of exotic cocktails at the cafe, and then grab a chair or picnic table outside and soak in the view. It is an incredible place.

Since we got there slightly before the 5 pm tasting, a cheery greeter informed us that we cold buy a cocktail at the cafe, which we all did. I had a tasty Gibson. 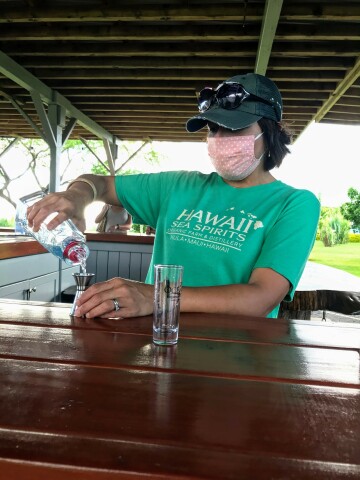 Our tour guide Marissa pours a shot during the tasting at High Seas Spirits in Kula, Maui. This is a not-to-be-missed-on-Maui experiences.

Immediately from everyone involved in this venture, you get a genuine feeling of good spirits, which is a very good thing for a place that makes spirits. Everyone working there that evening exuded a great and positive energy that made the visit even more spirited or spiritual.

I was also moved by the tasting, which begins with a brief history of the operation and background on the founder, Shay Smith. It’s a great story, and well told by our tour guide Marissa, who exudes the perfect presence to represent Smith’s concept and product.

The flagship product is Ocean Vodka. You’ve probably seen it because, as Marissa explained, it is now available in all 50 states. It comes in an oddly shaped ocean blue bottle.

But that is not why it is named Ocean Vodka. Ocean water is actually used in the making of Ocean Vodka. As Marissa explained, they draw mineral-rich Pacific Ocean water from 3,000 feet deep, desalinate it and blend it with organic Polynesian sugar cane spirits.

Marissa was able to capture the magic and science that goes into Smith’s vision as a farmer of traditional Polynesian sugar cane varieties and producer of distilled sugar cane products. Her secret, she shared with us, is that she spent 20 years as a teacher of young children, where story time is so important. She knows how to tell a story and engaged the entire group of a dozen or so tasters.

We started with a coconut rum that makes Malibu taste like sunscreen (or maybe it always tasted that way). Then I think we did a dark rum. Or was it light? No, I did not take notes. I was enjoying the experience too much.

Then on to an aromatic gin and the star of it all, Ocean vodka.

Ocean Vodka is sublime. We drank it neat and it was good. Great, even. No sharp alcohol bite here. No, this is soft and refined. Sipping vodka. I never thought I would see such a beast. But this is the real deal.

Offered as a $10 add on was a sample of Brum, which Marissa described as a special project of Master distiller Bill Scott, who sourced aged rums, blended them at the Maui distillery with their own rum spirits, and let them sit with charred kiawe staves (that’s mesquite here on the mainland) in bourbon barrels for up to two years.

I had to go for it, but I did so alone among my companions. Deep, dark, rich. Molasses. There were only 143 cases left. I should have bought a bottle. You can only buy it there.
After the tasting, my companions and I went to the café and ordered cocktails and food. We all agreed they were great, reasonable and combined with the view, a perfect end to our beautiful day. I hace a cubano calzone that was fabulous. Our Maui host had delicioous looking spring rolls and my traveling companion had an amazing wild mushroom flatbread pizza (I know it was amazing because I had to have a slice).

I’m sure you are wondering about the agave I mentioned earlier. With the big healthy plants, is there a tequila on the horizon for High Seas Spirits? Maybe you should stay tuned. This is a definite, not-to-be-missed place if you visit Maui.