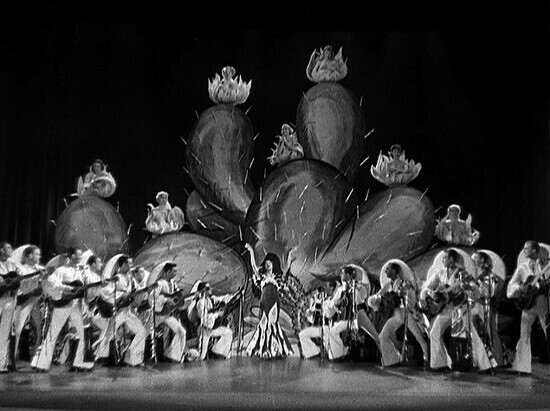 Give me a good old Hollywood pre-code movie any day.

What’s pre-code? Anything up to mid-1934, when the Hays Code was enacted on the American film industry, imposing standards that made it impossible to portray real people on the screen.

Under the suspicious and fearful eye of the keepers of the Hays Code, couples slept in separate beds. Women kept themselves mostly well covered. Indelicate language and situations were verboten. On and on …
So I was glad to see a collection of films from gay director Mitchell Leisen, which includes his 1934, just-pre-code Murder at the Vanities.

A murder story was created around the idea of just another night at Earl Carroll’s Vanities, a popular New York City revue that competed with The Ziegfield Follies beginning in 1923 and on into the ‘30s.
In an attempt to outdo Florenz Ziegfeld’s reputation as “the great glorifier of the American girl,” Carroll staged mise-en-scenes with as many as 100 scantily clad women on stage. In the movie we see a sign above a backstage door that says “The most beautiful girls in the world pass through this stage door.” That was Carroll’s counter to Ziegfeld’s title.

We see the spectacle of Carroll’s productions, with a murder mystery thrown in. So you can imagine it’s an incredibly goofy movie, part murder mystery, part musical. Dumb cops. Heaps of beautiful women, often scantily clad.

As I’m watching the camera slowly pan across a lengthy row of chorines, I thought I spotted Lucille Ball among them. I had to look it up, and sure, enough, she was in the chorus, along with Ann Sheridan, who I did not spot (but I will try again sometime).

The stars here include:

• Jack Oakie, serving as the sort of master of ceremonies. You might not know his name, but you know his face because he’s a character actor who has been in scores of movies, from uncredited bits in 1923 silents to Lover Come Back, his last film in 1961. He’s introduced talking to Earl Carroll on the phone and telling him not to worry about the show.

• Kitty Carlyle as the show’s soprano, and betrothed to the male star. This was Carlisle’s film debut, and one of three films she made in 1934. She spent as much time on stage as in Hollywood, but when I was a kid, I only knew her as a regular panelist on the game show To Tell the Truth.

• Victor McLagen as dumb and amorous homicide cop Bill Murdock. Not a great role for the great McLagen, who would win an Oscar the next year for his portrayal as Gypo Nolan in John Ford’s The Informer. He became a member of Ford’s acting company for a series of films made between 1948 (Fort Apache) and 1952 (The Quiet Man).

• Gertrude Michael as Rita Ross, the female heavy who abuses everyone – from her pathetic, cow-eyed maid to her colleagues in the show. Even though she made close to 50 movies and went on to television roles in the 1950s, I am not familiar with her. She makes an excellent evil one. The way she kicks and pummels her maid is not something you often see in mainstream movies. She also has the most spectacular musical numbers, including “Sweet Marahuana.” 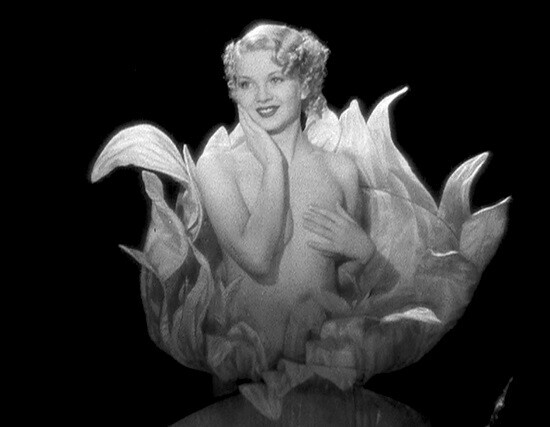 One of the nude women in the cacti during the “Sweet Marahuana” song.

• Carl Bisson, a Danish actor/singer, plays male lead Eric Lander, the ultimate momma’s boy. His mother works under a different name as the show’s wardrobe woman. One of the subplots is that mother has a murder charge hanging over her in Vienna.

• His mother, Mrs. Helene Smith, was played by Jessie Ralph, who made a career of playing matronly types in the 55 movies she appeared in between 1933 and 1941, perhaps most notably as battle-ax mother-in-law of Egbert Souse (W. C. Fields) in The Bank Dick (1940).

So, we have an evil chanteuse, a star with a secret, and motives aplenty.

But who kills her? That is the great mystery of this movie, but since her murder doesn’t happen until almost an hour into the movie, the murder is really not this movie’s main concern. And another murder precedes the evil one’s. A female private detective (what?) is pierced through the heart with a pin on a catwalk above the stage.

Many of the women featured in the film were authentic cast members from Earl Carroll’s Broadway stage show, which ran from Sept. 12 to Nov. 1933 at the New Amsterdam Theatre, and at the Majestic Theatre from Nov. 6, 1933 to March 10, 1934. They were brought out to Hollywood from New York especially for this film, and many stayed to pursue film careers. You have to wonder how things went for the ones who were not Lucille Ball or Ann Sheridan.

Before meeting her fate, the evil one performs the aformentioned and very odd “Sweet Mariahuana” (lyrics below), with a phalanx of sombrero-wearing guitarists and nude women cupping their breasts atop cacti.

But as she’s finishing the song, blood drips onto the shoulder of one of the nude chorus girls, and the murder mystery begins 38 minutes in.

But it’s not the evil one. Not yet, anyway. It’s a female private detective whose heart has been pierced with a long pin.

Yes, I agree. It is confusing, but don’t blame it on the marahuana.

There apparently was some concern about the song before the film’s May 18, 1934, release, but a studio executive justified its use by saying that thousands of people wouldn’t even know what she was singing about. I love that story!

And he could have been correct because even star Kitty Carlisle didn’t know what it was. According to her comments in a 2003 documentary called Complicated Women, she thought “Sweet Marahuana” was a Mexican instrument.

Also in the cast, Duke Elington as himself, doing a number called “Ebony Rhapsody,” which ends in a hail of blank Tommy gun bullets and one real slug intended for the evil one. 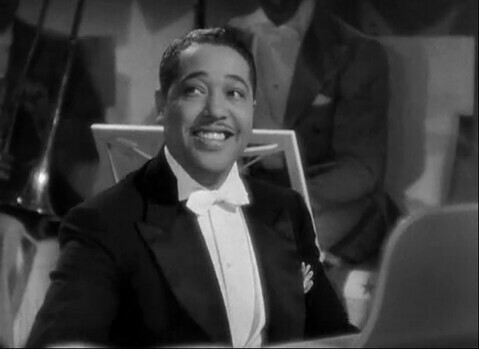